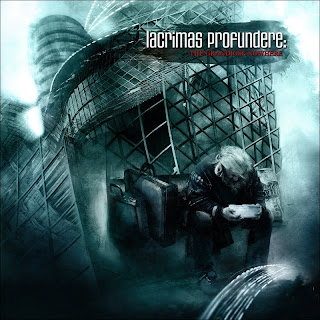 There was some time back that I was vastly opposed to anything that wasn’t traditional metal, wasn’t full on heavy for the sake of pummeling the listener into submission, music that wasn’t packed so tightly into a box of walls that I created to the point that the music couldn’t breathe or grow. How totally tragic is it to keep something from growing? Spend a season planting seeds and nurturing them into tiny green sprouts emerging from the damp soil, reaching for the warming rays of the sun. Thankfully, those days of inhibiting the natural order of things are well behind me and I can now accept, appreciate, and most importantly, love all forms of music. With all of that being said, the mid-80’s Pope would have been less than pleased with a band like Lacrimas Profundere and the sounds that they’ve delivered on The Grandiose Nowhere. The music would have been too ambient, too melodic, too goth-y, too artsy. In truth, it would have been too good for me to like. Eh, we all get older and hopefully a little wiser.
While Lacrimas Profundere has all of those wonderfully melodic textures dancing around their sound, they utilize the heavy elements to add strength and body to the music. The ambient portions feel more menacing, the melodies more dramatic, the gothic tones darker, and the artistic air more vibrant and lush. In listening to this album, I can’t help but hear flavors of so many past artists, but not one in particular. I hear a bit of the darkened tones of a band like Paradise Lost, especially with the heavily distorted guitars, but then I hear someone like Peter Murphy making spastic love to the mic. I hear elements of bands like the Cure . . . or Type O-Negative . . . or Moonspell . . . or Lacuna Coil . . . ach! Trying to pinpoint this band’s sound is like catching a dream upon a sudden and violent awakening. Suffice it to say, these guys sound good and, with their addictive melodies, have that sound that makes me want to listen over and over again despite those fleeting moments of melodrama. 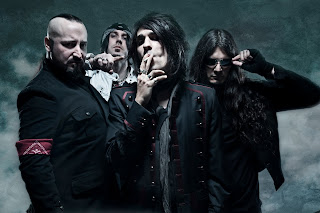 Where the album opener, “Be Mine In Tears,” initially got my attention with its heavy tones and upbeat drive, it was the second track that drew me deeper into the thralls of this albums power. “The Letter” is a brilliantly composed tune filled with an emotive vocal performance and the excellent execution of heavy metal power and melodic sentimentality. I love the way these guys have the various layers of keyboards and synths dancing around each other, kind of like some manic and chaotic waltz. Then, they fade away and are replaced for a brief time by a dense wall of distorted guitars and those sexy smoldering vocals. The contrast between the verses and choruses are dramatic, with the chorus melody as opiate addictive as they get. Go ahead . . . succumb to the addictive, narcotic qualities of the Lacrimas Profundere melodies. Sure, you’ll be humming them through the course of your day, but look at the positives . . . no liver disease, no lung disease, no kidney disease, in fact, this stuff will put a pep in your step and probably make you a healthier individual!
The underlying theme throughout The Grandiose Nowhere is the dark sexiness the percolates from the sultry sounds of the music. I’ve never heard the word ‘kiss’ used so frequently and still sound so sexy, so romantic, so dark and shocking. Check out the songs “Lips” and “Her Occasion of Sin,” and fall in love all over again. Not the kind of puppy dog and bright flowers love, but the love that’s laced with pain, longing for a lovers touch, the indescribable torture of being apart from the one you want more than any other. The words probably wouldn’t mean as much or be as powerful if it weren’t for the conveyance of emotion from the vocalist. That darkened, whiskey soaked drawl adds so much nuance to the subject matter, so much emotion that we, as listeners, buy into the tales of tormented souls. 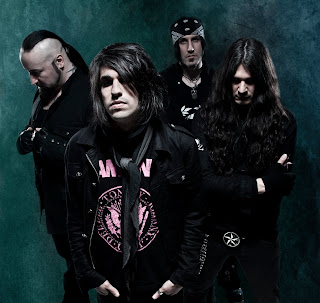 “Not For Love” follows the darkened pattern of the songs before it. Heavy verses sung from an understated position, yet still filled with nuance, and then as the song opens at the chorus and explodes with melody, we become hooked. This particular song has that something special . . . maybe it’s the bounce of the chorus, maybe it’s the dense riffage of the guitars, maybe it’s the haunting melodies, maybe it’s all of these things wrapped up into one composition. “The Fear of Being Alone” immediately follows with a new wrinkle added to the mix of instruments. Piano keys chillingly plink away at the opening melody and what sounds like a female voice joins the dominant male lead to harmonize to near perfection . . . maybe not in pitch or whatever, but purely in emotion. The combination of pianos and female vocals give the song the much needed element to separate it from the rest of the songs on the album. Beautiful and haunting, this is the song that I’ve found myself looking forward to as I spin The Grandiose Nowhere.
Finally, “No Matter Where You Shoot Me Down” wraps up the album and, in a lot of ways, shows the band writing and performing at their very finest. The guitars have an odd distortion to them, sounding a bit little some bastardized country western piece, all played over a throbbing rhythm. Again, the vocals steal the spotlight, painting a sepia toned picture of personal torment with the conveyance of the lyrics. They build and build with tension, and then just as one might expect the song to burst into a frenzied barrage of musical notes and complex tones, the song just seems to slip away . . . maybe it’s a little anti-climactic, but in actuality, it’s a pretty damned accurate reflection of life. When we up and die, odds are, it won’t be in a ball of flame as we rush head long into conflict. Most of us will probably die alone, in our sleep, of a broken heart . . . very few of us will actually die as the heroes that we see in movies or in our heads.
I’m not sure what I was expecting when I put this album on, but I certainly wasn’t expecting that I would immediately set finger to keyboard to begin composing my thoughts on this twelve songs collection of darkened rock tunes. Lacrimas Profundere will interest most of those music folk who have a serious dislike for the sun, but should also be a compelling listen for the more mainstream music fan. These guys work the melodies to perfection . . . they make them memorable, but retain a bit of a dangerous edge to them. There’s a lot of looking out over rain swept plains from the confines of a candlelit room in this music, but oddly enough, it’s not terribly depressing. On the contrary, the music is more upbeat and danceable than one might think based on the lyrical content. The Grandiose Nowhere has some of those crossover qualities in that it’s accessibly melodic while remaining dark and metallic, something that we’re starting to see more and more of as time goes on. And, for me, that’s a good thing. I like it when I can listen to a piece of music that will satisfy my listening needs no matter what kind of mood I’m in.  -  Pope JTE
www.myspace.com/lacrimasprofundere
www.lacrimas.com
Posted by The Ripple Effect at 12:38 AM

There was a time when you only liked traditional metal....now you've evolved to the point where you can appreciate guys with designer scarves that look like they have their own hairdressers.

Please keep up the good work, you commentary is hilarious.

There it is! Waveriders, we've received a number of snarky comments over the last few months from our brave writer,"anonymous." But since anonymous is just so, well . . . anonymous, we decided that we needed a name for this character. So let's call him "Mark." We like being on a first name basis with our readers.

Mark, we were afraid we'd lost you and your fantastic wit. Glad to have you back!"