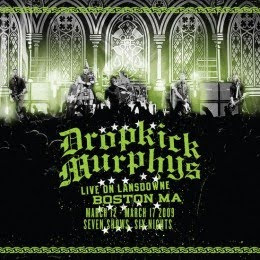 I’m not Irish, but I can tell you, without going to the North Atlantic, there can be no place more fun to celebrate St. Patrick’s Day than in Boston with the Dropkick Murphys.  From the opening, massive audience chant of “Let’s go, Murphys” you can tell this was a crowd amped and pumped and just hungering for the Murphys brand of fiery Irish infused street punk.  And boy, did they deliver big time!

Recorded during the Murphys stint of seven shows in six nights encompassing St. Patrick’s Day in 2009, this is a roaring, bar room frenzy of Oi! Punk and roll.  The love the audience has for these cats is palpable, showering the stage with screams and chants and stomps.  The Murphys, in turn feed off that energy, like a hurricane feeding off a low pressure zone, gaining power and momentum as each moment of this triumphant affair unfolds.

My introduction to the particular Celtic brand of Murphys punk came through the back door.  After reviewing the last Street Dogs CD, I bent over backwards to find everything these guys were involved with, but still, I was unprepared for the shear passion these cats bring to the live stage.  Whether tearing through a manic pure punk frenzy like “Famous for Nothing,” dropping down into some more fired up traditional sounds like “The State of Massachusetts,” or even punking up a traditional blast like “Johnny, I Hardly Knew Ya,” there is simply no stopping these guys.  They are Celtic Punk.  They are pure energy in motion.

Mixed in amongst the pure volume and raging devotion the Murphys bring to their music is an assortment of traditional instruments like accordion, bouzouki, mandolin, banjo, bagpipes and tin whistle.  Instruments most punks can’t even pronounce much less play.  And that’s one of the things that makes the Murphys stand head and shoulder above just about every other American punk band ever.  Each member of this rowdy crew is a musician first, finding their outlet in truly tossed-to-abandon punk rock. 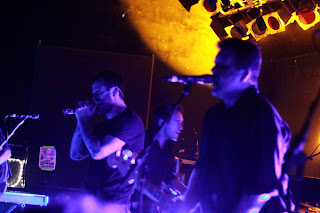 “Johnny, I Hardly Knew Ya,” is a show stopper.  Sure, we’ve all heard this song before but not this way.    Sped up to amphetamine pace, the band is one fused, tight unit, while Al Barr’s vocals dig into every ounce of emotion the song could ever imply.    This song alone cements in my mind the power of the Murphys live and etches their name forever into my forebrain as the legends they are.

This album succeeds where so many live albums fail.  Fuck the overdubs, this is raw and raucous and triumphant.  Never before had I heard a live album that made me want to be in the audience as much as this one does.  Pogo-ing til by calves cramp.  Throwing elbows into the ribs of my new best friends.  Screaming, and chanting and singing til my throat bleeds raw Guinness.  Fuck, this album is so victorious, it makes me wish I was Irish.  And Bostonian at that. 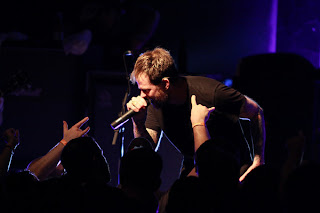 “Caught in a Jar,” is a bagpipe-laced punk rave up.  “Captain Kelly’s Kitchen” is pure fury.  “Fields of Anthenry,” is a torrent of bagpipes, guitars and heartfelt vocals, all wrapped up in a gangland, sing-along chorus.  Fists pumping in triumph.  Ale pints swishing side to side.  “Tessie,” a natural for this album is a crowd-rousing ode to the Red Socks leading the audience to gang chant a toast to their favorite team.

And the album goes on growing in verve and vim all the way to the encore, where another one of Boston’s favorite sons, The Mighty Mighty Bosstones join the Murphys on stage to a pounding rendition of “I’m Shipping to Boston.”  I’m not versed enough to know which instruments are played on this baby, sounds like accordion and bagpipes and whatever else they found on stage, but it is magnificent.  Don’t know if anyone ever called the Murphys magnificent before, but damn it, they are.  Their fierce blend of Celtic roots and punk, so decidedly Bostonian, is just so zealous it can kickstart the oldest, most failing heart.

Yeah, I’m not Irish, but damn if the Murphys don’t make me feel I am.

Pope, pack the Ripple mobile.  Next St Patrick’s Day, we're there, and we'll be pressed up against the front of the stage and we'll be black and blue and exhausted and spent and we'll bless every second of it.

Somebody, get me a Guinness.