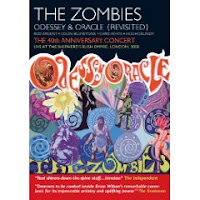 In the summer of 1984, I found myself abroad, living and studying at Cambridge University.  Wandering the streets one day, past pubs and cricket fields, walking over the river Cam, I stumbled upon the only true record store I chanced upon the whole time I lived in the city.  And it was glorious, mind-numbingly glorious.   The racks were full, stacked full, of glorious British vinyl of the sort I just never saw in the States.  Given that it was 1984, of course there were tons of fantastic post-punk, goth, and Frankie Goes to Hollywood LP's, EP's and singles, but what caught my eye more than anything else was the section devoted to the Zombies.  Sure, I'd heard of the Zombies before, and probably even knew somewhere in the back of my mind that they sang that ultimate psych-pop hymn of the late sixties, "Time of the Season," but in truth, I really had no idea who they were.  Glancing across the covers of all this archival British vinyl, I was entranced by this quintet of impeccibly clean cut guys with the horrific moniker.  That moment started my love affair with the band that has lasted now over 25 years.

Stepped aside as a mere footnote back in their day, history has proven the Zombies to one of the most influential, gorgeously melodic groups of all time.  Way, way ahead of their time, their combinaton of lush, layered harmonies, stunningly gorgeous melodies, Colin Blunstone's breathy vocals, and Rod Argent's influence of jazz and classical piano was just far too adventurous for their era.  Now that has all changed.  No other band besides the Beatles and the Beach Boys could claim to bring such a level of melodic sophistication to their music.  And of their entire career, their one true album, Odessey & Oracle is without a doubt an all-time classic of sublime psychedelic pop.  Released after the band had already broken up, the album was a total flop in it's day.  Only the posthumous release of "Time of the Season," kept the album in the music-lovers consciousness.  Since then, as time has past and our ears have matured, Odessey & Oracle has rightfully be garnered a new respect and is now held in the same esteem, nearly the same breath as Sgt Pepper and Pet Sounds as a masterpieces of dreamy, devastatingly gorgeous melodic pop. 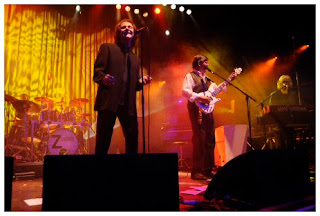 Captured live on DVD at the Sheppard's Bush Empire, London 2008, Odessey & Oracle {Revisited} finds the four remaining Zombies (Rod Argent, Colin Blunstone, Chris White, Hugh Grundy) joined by the Zombies Touring band (featuring Jim Rodford, former member of Argent) for an absolutely spellbinding concert re-creation of Odessey & Oracle performed live and in it's entirety.  I gotta admit, I got totally caught up in the emotion of the moment with this show.  When Rod Argent (ever so graceful and humble) announces that, since the band broke up before the album was released, they'd never had the chance to perform these songs live, and that we were witnessing the very first time the band ever could play this album, I got goose-bumps up and down my spine.  Now granted, I'm a Zombies fan, but the thought of watching a band perform an all-time classic album, for the first time, after being apart for 40 years is pretty damn special.

None of this would matter of course if the band didn't sound so fantastic.  I swear, fantastic.  My wife, walking in and out of the room while I fanboy-ed out on the show, stopped mid-step at one point, stared at the TV and said, "My God, their voices sound so angelic."  And with those words she captured the entire essence of the Zombies.  Definitively British, their music at its best is a dream-like journey through phases of pastoral British history, all wrapped up and gently floating upon those melodies.  Always those melodies.

No fan of the Zombies should miss this.  From the get-go, the lads (sixty-plus year-old lads) take the stage and claim it as their own.  Starting off with three songs from their earliest recording history "I Love You," "Sticks and Stones," and Can't Nobody Love You," the band is tight, Rod is energetic (and looking remarkably fit) and Colin show's that his voice has lost none of its heavenly texture.  They go through a brief set from Colin's solo career, before ending Part One with a rousing rendition of "Hold Your Head Up," the rock standard from Argent's self-named band.  And it's lost none of it's power over the years.

As enjoyable as Part One is, the real meat of the concert is the first-ever performance of Odessey & Oracle in it's entirety, and let me tell you, it's remarkable.  The stuff legends deservedly are made from.  Taken as a whole, the entire artistic vision of the album is nearly too beautiful to comprehend.   A grand, sweeping, swirling ride across oceans of melodic bliss, angelic soaring harmonies, and musical exploration.  Never before had the true grandness of their mastery of melody been so clear for me.  I'd call them the British Beach Boys based on the glory of their craft, but in truth, I like the Zombies so much more.  They carry so much more depth to their enchantment, a mix of major and minor chords, an entire universe of moods and tones.  For an album I've loved for years, watching them perform made it seem as if I was hearing the album again for the very first time. 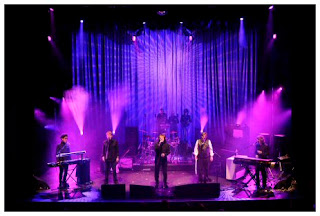 There's not a weak track on this masterpiece, but the live renditions of "Care of Cell 44," "Maybe After He's Gone," "Hung Up on a Dream" and "Changes" are breath-stealers.  It's so hard to imagine them sounding so produced, so tight, so remarkably glorious after all these years.  Meanwhile, songs like "Brief Candles" and "Beachwood Park" spring to life with an entirely new intensity and somber beauty.  Chris White's vocal performance on "Butcher's Tale" reaches so deep into the terror that a young soldier feels lost on the battlefield that it can nearly pull a tear from your eye.  Backed by Rod Argent on a 1890's organ, it's a song of infinite and remarkable power.  A brutal combination of mesmerizing melody and stark terror.  Truly a remarkable song.

No true Zombies fan, however, would fail to admit that the highlight of the show is to see the original band tearing through a perfect rendition of "Time of the Season," which hasn't dated itself at all, and still reigns as one of the hallmark psych-pop songs of the era.  Seeing the joy on the guys faces as they play this, and every song on the album, just warms the heart.  It's their moment and they seize it, every second of it.

The show ends with two triumphant encores, "Tell Her No," and a heartstopping version of "She's Not There."  Two more magical moments in what can only be described as a magical night.  A night where both the band and the music proved themselves to be ageless.   A triumphant performance of a truly seminal work.

Personally, I don't like music DVD's. I listen to music, I don't watch it.  But this one will never leave my side.  Timeless.  Absolutely timeless.

I saw them in 2008 at Milwaukees Summerfest. They were absolutely great! Colin's vocals are still right on and Rod is the conductor of this band. The harmonies are spot on as always. I have always loved this album and history kind of passed it up. I think when Rolling Stone named it #80 in the top 500 albums it gained a huge boost. Very, very good song writing, way ahead of its time.