Truth Corroded - Upon the Warlords Crawl 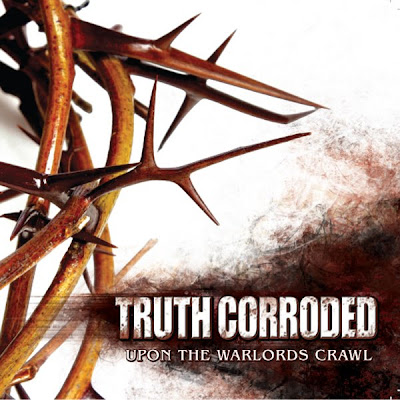 At the time of this writing, Truth Corroded is a big fish in a little pond . . . the pond being Australia. Therefore, Truth Corroded is a small fish in a very large pond, swimming around with some seriously big fish and millions of similar sized and smaller fish. Let me tell you right now, this won’t be the case for very long.  Having already toured in support of metal heavyweights such as Behemoth, Sepultura, Dark Tranquility, and God Forbid (just to name a few) these guys are poised to steal the metal spotlight in a grand way. Upon the Warlords Crawl is as superb a heavy music offering as they come, rumbling with youthful rage, composed with the care for the craft, and thrashing in your face with the immediacy for a new world order. Though the music isn’t really breaking any new ground in the way of extreme metal, Truth Corroded accomplish the aural beat down with the combination of musical proficiency and skin deep emotional turmoil that can only draw comparisons with the most honest of artists. These guys bring it with infectious passion.
Go back in time to a land where Testament, Exodus, Sepultura, and Dark Angel roamed the earth and remember when their take on heavy metal was a thrashing new view on banging the head that wouldn’t bang. Now, take those same ideals, those same fiery volleys of sound, those same extreme approaches to creating music and fast forward them twenty years, and you should be getting an idea of what Truth Corroded bring to the table. Like I said, it’s not a new form of music, but the execution of the music is stellar. But make no mistake, their music isn’t a retro sound of thrash. It’s much more immediate than that. Take “Salute the Horrors”, for instance . . . heavy and pounding in aggressiveness, but littered with fantastic displays of musicianship and nifty production. Check out the weird break about a minute fifteen in. This is the kind of stuff that fires me up because it’s a subtle effect that’s thrown into the mix, and only makes the subsequent pummeling that much more heavy and bruising. It’s a great song, but here’s a little secret . . . it’s far from being my favorite. 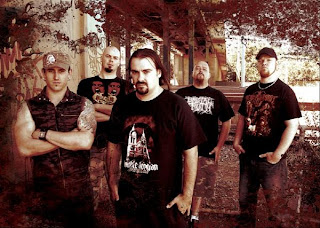 "Decimate" comes out sounding like pieces of Chaos AD-era Sepultura, heavy and uncompromising, but with serious elements of grove. Massive flurries of double bass drum with galloping guitar riffs, and vocals that are reminiscent of some of the great punk and hardcore of the late 80’s. Toss in a most excellent guitar solo, brimming with technical wizardry as well as sheer emotion, and I’m quickly sliding this album up the ranks of the best albums I’ve heard in the past year. However, it’s the next song that delivers the most punishing beat down of them all. “Buried Alive By Demons” is a brutal and grooving assault on the senses. This song is like a mechanized creature rising from the bowels of a dark laboratory, obliterating everything that stands in its path, created for one sole purpose . . . destruction. Destruction of everything around it and, ultimately, itself. This is the kind of song that epitomizes heavy metal. Yeah, it’s fucking heavy and its aggressive, but it’s got texture to it in the way of virtuosic guitar work and subtle ambient moments. It’s the kind of song that makes you want to yell and break shit and fight and fuck . . . not necessarily in that order.
And what metal band worth its weight doesn’t cast a few stones towards religion? “When God is Murder” is incendiary; vocals spitting venom, heavy rhythms acting as wrecking balls on the walls of a wood clad church. As much as Truth Corroded show off their impeccable musical talents, they deliver the goods in such a raw manner that it’s hard not to feel the blood rush to the head, to feel the heart pumping faster and faster, to feel a little manic and angry. Just listen to the opening riff and you’ll know where I’m coming from. “When God is Murder” is the type of song that gets a room of stiff legged metalheads moving as one elbow flailing being, and the tune never seems to let up. The rage that’s being conveyed is exhausting. 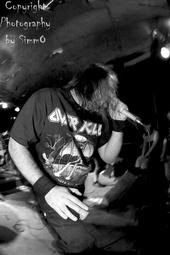 As if the band saved the best for last, Upon the Warlords Crawl is wrapped up with “Despair Your Black Earth.” Though the vocals seem a little unsure in the buildup of the song, the intention of the tune more than makes up for any other inconsistencies and the song is simply devastating. Slower than most of the rest of the album, “Black Earth” shows the band pushing the envelope on their previous compositions and confidently stepping into unknown territories. One might call this track the “epic” of the album because it has the most dynamic shifts in tempo and tone. The explosive bursts of sound are made so much more powerful by the slower portions. One doesn’t have to close their eyes too tight or use too much imagination to visualize an apocalyptic scorched wasteland while listening to the chugging riffage or the tortured howl of the vocals. Truth Corroded created a masterful piece of music with this eight minute quasi-epic song.
I love the emotion that the band displays on this record. It comes across as honest and passionate, never once did I feel that anything I was listening was forced. I hear a band that ingested a lifetimes worth of old school thrash metal and vomited out a modern version of this metallic style. I mentioned that it’s not the most unique music I’ve heard, but God damn! Truth Corroded do it as well as any band I’ve ever heard. Maybe even better. The musicianship is top notch, the production is ear splitting, the compositions are strong, to the point, and get the message across. If you’re a metal fan and you’ve been living on a steady diet of Lamb of God or God Forbid, vary up your diet with Truth Corroded, pick up a copy of Upon the Warlords Crawl, then fly, swim, or drive to Australia to see these guys tear the shit out of every living creature with a sound so damn heavy and devastating that you’ll think that you’ve entered a nuclear war armed only with a switchblade.
--  Pope JTE

buy here: Upon the Warlords Crawl