To the Cosmos - Space Rock Round-up featuring The Most Powerful Telescope in the Universe, Exeter, Apteka 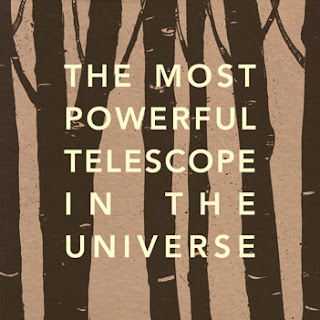 The Most Powerful Telescope in the Universe - The Moonlight's Fair Tonight

In the simplest terms, it's rare to find an album this gorgeous.  And even rarer to find one so warm, so positively glowing in the moment.  A group of friends, as much as a band, The Most Powerful Telescope In The Universe recorded their full length album The Moonlight's Fair Tonight by assembling a group of musicians and shuttling them off for two weekend-long stints at a secluded woodland cabin somewhere in the woods of the Pacific Northwest.  Nothing was written in advance.  Nothing prepared.  Just the musicians and the desire to create an album on the spot. Obviously, the environment was conducive to feed the muse of these cats, because what they created is a breath-taking journey through Of Montreal's indie-pop sensibilities and Explosions in the Sky sonic experiments.

Guitars weave and curl, swirling through the mix like smoke coming from that cabin's fireplace.  Keyboards layer in, hiding underneath, floating to the top, twisting through the air like dust floating in a beam of moonlight.   Songs float and levitate across the vinyl, barely being contained by the pull of gravity's force.  "Last of the Incas," the lead-off song fills the air with all that these guys represent; loads of swirling, reverb soaked psychedelic guitar that builds in subtle beauty until it takes flight.  Joy Division-esque bass adds a weighiness to the proceedings, keeping the song from become fey or too disconnected. Keyboards float by like cosmic dust while the vocals jump on the tail of a passing comet, adding a gentle whispering beauty.  "Cops Chasing Undercover Cops," follows without bothering to touch back down on terra firma.  So gorgeously constructed, so lushly soaked in the sweetness of some floating constellation.

Don't let the thought of "space rock" or "psychedelia" put you off.  This isn't head lost it's own ass music that wanders endlessly searching for a melody.  It's a testament to the strength of the musicians that each song hangs together firmly within it's own melodic structure, but loose enough to expand throughout the solar system.  Simply put, this album is scrumptious.  One listen is all it takes.  One listen to know that you also want to join that flight, leave the earth behind and reach out into the cosmos.  Or at the very least, join the musicians next time they take to that remote cabin.  Ah, what I wouldn't give to be there and watch it all happen.

Available as a free mp3 download, or you can buy the lush vinyl at:

Continuing on our journey through the cosmos, we jump from the diaphanous clouds of space dust that is The Most Powerful Telescope in the Universe onto the back of the rocketship Exeter and blast off deep into unexplored galaxies.  Keeping the swirling, churning guitars that hallmark spacerock, Exeter marry them to a full-on jet fueled engine.  This is spacerock with someplace to go.  Roaring with a wall of sound, powered by a truly thunderous drumbeat and driving bass, Exeter fuse shoegaving spaciness with the urgency of post-punk, leaving me breathless as I motor on this high-octane ride.

Black holes shoot by to the left, giant brown dwarves to the right as the guitar grind down with a meaty intensity.  Heavy.  Gritty.  Song structures are tight, but not contained, leaving the band plenty of room to blast off in all directions of feedback drenched guitar and catastrophic collisions of sound.  "Bittersweet Vanity," lays it all bare on the first track.  Heavily atmosphere-drenched guitar brings us in eerily, building with the anticipation of the coming blast-off.  And we don't have to wait long.  About 40 seconds in some crunchy chords slice through the mix, drums building in the background until full liftoff hits us with the power of a rocket launch.  From there, it's one cinematic escalation of spaced-out fury, tempered from destruction by some simply gorgeous melodies and layered vocals.  As a song, it's a show stopper, and it's only the first track!

From there, the boys from Austin never let up.   Grey Noise, White Lies is a celebration of sonic textures, punk intensity, and unexplored worlds.  Never a dull moment, never a moment less than mind-boggling.  Catch this rocket if you can.

Sometimes it's frankly alarming at just how good some bands are.  Rounding out our journey through the outer cosmos, following the simply stunning albums of TMPTITW and Exeter, this report just wouldn't be complete without a mention of this Chicago group and their debut, Tour EP.   Blending a Jane's Addiction vibe to their non-stop swirling kaleidoscope world of shoegazing and The Seeds-flavored garage-psychedelia, this band isn't one to watch, they're one to know now.  So much music comes into the Ripple, and all of it gets heard.  Sometimes it takes several listens to find an album's spine, to get deep into it's mind.  Not here.  Twenty seconds into the album opener, "The Sheet," and I was hooked.  Walls of feedback drenched guitars fill every conceivable nook and cranny, the drums hammering the song forward, until . . .wow!  Until the vocals kick in amidst a sudden flurry of bass and super-revved guitar.  That did it.  In that moment I became a charter member of the Apteka Space Federation, willing to go on countless missions of sonic exploration with my pilots.  Yes, it really is that good.

First of all, calling this album an EP is a massive disservice to the band.  Recorded while on tour, the Tour EP is fuller than most albums, clocking in at 9 fully-realized songs of stunning, sweeping mood and texture.  "Where You Sleep," loses itself in post-Joy Division hazy psychedelic moodiness, riding that monsterous bass line through the opening into uncharted territory.  Believe me, the Joy Division references drop out quickly as the boys delve into a simply gorgeous multi-part harmony of delicate psychedelic pop.  "Cicada Song," is another unabashed winner, brought in by a handsomely strummed acoustic guitar.  By the time the the chrous kicks in, we've left the gentleness behind, rocking out like The Church at their fiercest.  There's not a misstep here, all the way to the full-on assault of "She is Riots," the Jane's Addiction-esque closer of thundering walls of guitar and clashing clouds of bass.

Best of all the whole album can be downloaded for free here.  If any of the bands I mentioned get you going, don't miss this one.  Years from now, when Apteka is headlining some massive intergalactic music festival, you'll be able to say you knew them "back when."