A Sunday Conversation with Dusted Angel

February 21, 2010
Inspired by a love of all things heavy, Woody takes the helm today, bring you a Sunday Conversation with Dusted Angel 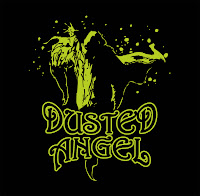 First off, I love the name Dusted Angel. Who came up with it and what was the inspiration?

I came up with the name, but it took a while to stick. We named a song "Dusted Angel", and playing it kind of cinched the deal. Looking back in retrospect, I think the inspiration came from some crappy PCP experiences I had in Jr. High in the 70s.


Give us a little background on how Dusted Angel came together. How long has the band been together, who’s in it, what’s your home base, etc.

We live in Santa Cruz, California. Bill Torgorsen (BL'AST!), Scotty Stevens, Eliot Young, and Eric Feiber  started jamming, and a mutual friend, Keith Meek, hooked us up. I nearly soiled my trousers when I first heard them play. We have been together for one year. We recorded the 7" a month after we formed.


How would you describe the Dusted Angel sound? What bands have inspired your music?

Pure senior citizen aggression. A bunch of old dudes getting together and playing a Satanic "hodge-podge" of all the music we've ever loved, with a hearty dose of BL’AST! thrown in for bad measure!

Your debut 7” is out now on Corruption Records (2 songs on vinyl, 3 from iTunes). How did you hook up with that label?


Jason got hold of us, and wanted to do something, so we decided to start with a 7" (we've only been together for a year). It's been rad working with him, and we hope to do more.


What’s the response been to the record so far?


Had you worked with Billy Anderson before? Were you a fan of the bands he’s worked with before (Sleep, High On Fire, Melvins, Mr. Bungle among many others)?

Billy recorded all the Spaceboy and Gargantula --I owe him my life. We are friends with, and fans of, most of the bands he's worked with, so it's just a natural, and logical place for us to be. The dude, kind of, kicks a little bit of ass!

How many songs does the band have? When can we expect a full length Dusted Angel album and on what formats (CD/LP/cassette)?


We have about 12 songs, and we are recording 3/8--3/18 with Phil Spector..., I mean Billy Anderson in Oakland and SF. Format wise, we're looking at limited 8-track, until we're able to throw it onto picture disc. 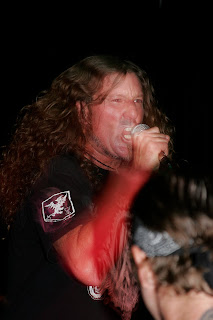 Vinyl, CD, or digital? What's your personal format of choice?

I don't own a record player, but I've always thought punk, and all heavy music sounds best on vinyl.


Dusted Angel has played with some really great bands and just played with Saint Vitus (1/29/10) in San Francisco. How was that show? What did you think of Saint Vitus now as opposed to 20+ years ago?

We've been fortunate in that department, for sure, but the "Vitus" thing kind of took the proverbial cake, so to speak! The last time I saw them was about 25 years ago, when BL’AST! played with them at the Anti Club. If this monumental event happens to take place in your neighborhood do not miss it....They are better than ever! It will give you the chills and blow your mind.


What’s the crowd like at your shows? Here in the NYC area I’ve noticed that there are a lot of under 21 and over 40 people into this style of music but not so much mid-20’s to 30’s.


What inspired you to originally get involved in making music?

The world as a whole.


How’s your hearing these days?

It's a little fucked up, but our drummer, Bill, was born too late, ... I mean deaf in one ear, and has to wear protective head -phones to protect what he's got left.

Who are some of your biggest musical inspirations? Favorite albums?

Whatever band I'm standing in front of, that's blowing my mind, at any given time.

I’m a big BL’AST! fan but am completely ignorant of your other bands Gargantula and Spaceboy. Can you get me up to speed on them?

I'll send you some shit to check out. The unreleased Gargantula record is going to be released on Corruption/Relapse this summer.

Do you think Greg Ginn will ever re-issue and remaster the BL’AST! albums? Or any of the SST back catalog?

I don't know what the fuck they're doing, but they better send us a fucking statement!!

BL’AST! were a really heavy duty band in its time. Did you ever get resistance from the hardcore crowd for being too metal? Did the metal crowd think you were too punk?

BL’AST! was pure resistance from the get go...we were to hyper-advanced for our own good. The more misunderstood our music was, the more it inspired us to fuck shit up.

What’s the most insane thing you ever witnessed from the stage at a BL’AST! show?

About 800 or so people fighting while we were playing at Fenders ball (brawl?) room in Long Beach. We never stopped playing when people fought, we don't let meatheads cut into our set time.

Did West coast promoters Goldenvoice ever try to pay you in marijuana after a show rather than cash?

No, but Gary Tovar put on the best shows in punk/metal history, as did Paul Rat in SF. 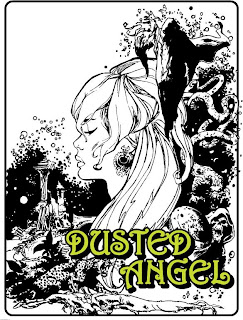 Were you surprised when bands like Fu Manchu started citing you as an influence?

No, we've been good friends with Scott since the Virulence days. Everyone influences everyone, that's just how the cookie of progression crumbles.

When did you notice bands starting to merge a hardcore punk attitude with more of a classic rock sound?

Speak of the Devil! I would have to say Fu Manchu and Kyuss were the first and most timeless and original examples.

What’s next for Dusted Angel?


Thanks for taking the time to do this interview. Anything you’d like to add?