February 12, 2010
“Where, where, are you tonight?
Why did you leave me here all alone?
I searched the world over,
And thought I found true love.
You met another and
Phht! you were gone.” 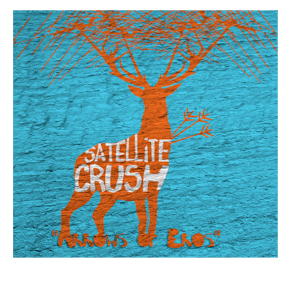 Elliot Craig left for London to form a band and write music. He left the girl he loved in the States. Craig was lonely in the U.K. and hardly scraping by.  He wrote songs to his U.S. love and sent them to her. But, alas, she didn’t stay in touch and ultimately, she was gone.

With a compendium of unrequited love songs Craig started playing open mic nights around London and formed  a small band that, as small bands do, didn’t get along well due to divergent work (and other) habits.  He returned to the States, to L.A., and formed a band, Satellite Crush, which was partially named after Craig’s lost love. The band based its material on the forlorn songs Craig wrote while in London.

Recently, Satellite Crush released a downloadable EP that consists of five of Craig’s London songs – “Lovesick Soul,” “Paris To London,” “Should Have Been Killed In The ‘60’s,” “Strictly Platonic,” and “Jealousy.” While the lyrics (at least the ones I could hear) are the bread and butter of country music (I couldn’t help thinking  that, if the songs were played backward, the girl would come back and the dog would rise from the dead) the instrumentation is astonishing.  It is as if Tom Petty, The Cure and Bono had a ménage à trios and Satellite Crush was the offspring.

Each song is permeated with Craig’s angst-ridden voice, swelling acoustic and electric guitars encased in reverb, airy background vocals, steadfast drums, and balanced bass. Unlike the lyrics, there is no “country” in the music, unless that country is Great Britain.  The “Britpop” influence comes through in the “wall of sound” engineering of the stereo.  Each song is an anthem. Think of it as “Britpop” meets “emo,” but in a pleasing commercial package.

The concept is promising and this is a band to watch.  I expect Craig’s lyrics will get better now that he has met another love and has delved into the raucous L.A. music scene.