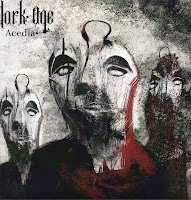 Now, I don’t want to come out and say that the melodic death metal of bands such as Dark Tranquility, Soil Work, or In Flames has been done the death, but there really have been few compelling moments over the past five years or so from this sub-genre to make my pulse rise above my resting heart rate. So, when a melodic death metal band’s album finds its way to the top of my desk, I generally give it a sideways glance, sigh a little bit, and begrudgingly insert the shiny little disc into the player expecting some tolerable, though unexciting music to drone away in the background for about an hour. The music is typically detuned and heavy, distorted, filled with abrasive vocals, but plodding and comprised with less than desirable dynamics to make me all that excited to be listening to it. However, this feeling suddenly changed as I gave Germany’s Dark Age a listen.
Acedia is a melodic death metal album that I found not only intriguing, but something that tickled my imagination to the point that I couldn’t stop listening to it, consistently immersing myself in the sounds as they swirled in a chaotic cloud through my head. Fusing those sounds that one might find from the whole Gothenburg movement, but adding heavier doses of goth-metal, and a few compelling chunks of dark wave, Dark Age have achieved the sound that I so desperately wanted to hear from the aforementioned masters of the genre. Acedia has become my own personal getaway vehicle, a means for me to slip into a semi-comatose state and vanish from my own reality and into a darkened fantastic world of pain, mental torture, and self sacrifice for the betterment of my own existence. Actually, that’s not really that far off from reality, but I think you get the point.
The album starts off well enough with a discordant musical intro that explodes into a shimmering display of incendiary debris. “Kingdom Nevercome” was the exact song that I needed at the absolute perfect time. Heavy in all that is metal, but laced with a delicate fiber that gives the song, and pretty much the entire album, the diversity and dynamics necessary to make it a gripping thrill ride. The vocals start off with a gruff and guttural quality, very reminiscent of the extreme metal of the day. However, once the song works its way to the chorus, that voice dramatically shifts to a beautifully clean texture, packed with melody . . . and the phrasing! Shit . . . it’s breath taking, addictive, and so damn endearing that I’ve woken every morning this week humming the song. On top of this song touching me in a musical sense, I’ve found the lyrics to be well conveyed, brimming with emotion, on the subject of working for naught . . . slaving away for someone else’s benefit at the sacrifice of one’s own ideals. Quite simply put, it’s a subject that I know all too well about and it feels pretty damn good to know that these guys have been there and walk the path so many of us do. 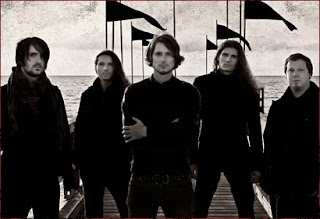 “Devote Yourself To Nothing” briskly follows the lead track with a bristling and heavy tune. As this song opens, I get a sense that I’ve heard a similar sound before, but not from the places one might think. Though the track is heavy as all get out, there’s a certain quality to it, a darkened melody that reminds me more bands like Depeche Mode or The Cure . . . but really fucking heavy! Again, the band finds themselves questioning all that they’ve believed in and ultimately deciding that the devotion to emptiness will save them from further pain and suffering. The music perfectly reflects the desolate view, though leaving the ever so slight crack in the door for the rays of light to shine through. Dark Age does a great job of combining an infectious melody with a brutally heavy groove, and with the addition of the poignant lyrical content, creates a moving song that plays wonders with the imagination.
For a different kind of wrinkle in the musical tapestry laid before us, Dark Age drops the hammer with “Neon Gardens.” Bursting out of the speakers with calculated metal power, this song adds a little bit of a twist the sonic delights that have assailed us for the first eight and a half minutes or so. The vocals, in particular, have a creepy nuance as they vibrate over the pulsing death riff of muted guitars, palpitating bass lines, and textural synths. Somewhat distorted in the mix, the vocals work to perfect through their mechanical delivery. Then, as the song opens up, the vocals explode with a violent characteristic quite similar to the delivery of Linkin Park’s Chester Bennington. Say what you will about Linkin Park (I happen to love what they do), when they want to peel your face off, they do a fantastic job, and the same can be said with Dark Age. Mellow and melodic for just the right amount of time before showing the listener that these guys chew on rivets for breakfast. 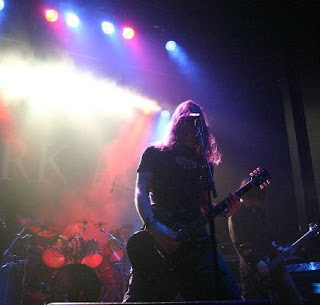 Incorporating techno/electronica elements with huge metal movements on songs such as “Zeitgeist – Ghost in a Machine” and “10 Steps to Nausea” show that Dark Age are far from your typical melodic death metal outfit. What’s more impressive about these attempts is that these guys do it so damn well that the amalgamation of the various genres feels very natural. But don’t thinking that Acedia is suddenly about some morbidly accessible dance mix. Dark Age wraps up the album with what is possibly the heaviest song on the album while still fusing in huge doses of catchy choruses. And even while you’ll more than likely be singing along with these choruses, note that the lyrics, though not self deprecating, are somewhat defeatist and show that despite our best efforts, we’re doomed to spend our eternities buried in so much dirt.
As much as I love the escapism of this album, I love that the album rings with a chime of truth. Acedia is emotions worn on the shirtsleeves of Dark Age and, for once, the darkness and despair feel like emotions and states of mind being conveyed with honesty. Today is bleak, but tomorrow is going to be worse. Sure, it’s all a matter of perspective and how we approach our day to day lives. But doesn’t it feel good to revel in your own depression for a little while? Doesn’t it feel good to be a miserable cantankerous despot just for the hell of it? I think so. Though, I also know when enough is enough and realize that I won’t get anything done, no matter how futile such an endeavor might be, if I don’t buck up and be a happy camper. So, with that being said, Acedia is an escapist album for me, and one that I find enjoyable to no end.