Blood red and black the front cover on the CD would make an even better album cover: one to stare at over and over as you flip the vinyl getting stoned after school and engraving the head of the vulture into your Pee

Chee notebook.  Put on the headphones and step into their world. Its Homme, Grohl and, yes, John Paul Jones deciding to kick out some jams for you to listen to.

It doesn’t try to blow you out of the water from the first track, which is what you might think of from a power trio comprised of those three, but this is a trio that doesn’t need to smash you upside the head from the word go. "Nobody Loves Me and Neither Do I" opens with Grohl’s powerful backbeat and the underproduced sound of the band in the room. Drums front and center, JPJ on the left, and Homme on the right, the band sounds like they’ve just walked into the practice studio to knock a few out. Odd metered riff and Homme singing about a some hot sex. We’re all good until 2:44 in and they take the fucking gloves off. Grohl starts to hit them like he’s finally in John Bonham’s seat and JPJ brings the bottom end of the Hammer of the Gods.

i know how to burn with passion
hold nothing back for future ration
give all you are, do not make haste
savor every single taste
you get...cut

i know how beat control
do opposites of what you're told
quick to react, to break the box
turn on queue, as your cell door locks
behind you

Without the virtuoso guitar hero, Homme plays the rhythm and the textures and riffs, but doesn’t fill the space the way that Jimmy Page did , although his sloppy fills to start "Mind Eraser, No Chaser" bring to mind Pagey’s playing with Zeppelin live.  Gifted with one of the best choruses on the record is the classic line: Gimme a reason why a mind is a terrible thing to waste.

Mindful of the history of power trio supergroups? Usually they tend to devoid of irony or any sense of history, but the Vultures are a little better than that. Here is one where you think that you died and wandered into classic rock heaven or a classic rock car crash. Homme nails the Cream falsetto and Clapton chord changes, Grohl absolutely kills with his Ginger Baker drumming, and JPJ tramples it all underfoot with the funkiest white boy keyboard playing since getting physical with his graffiti. Four minutes and 27 seconds that you won’t be able to turn off. 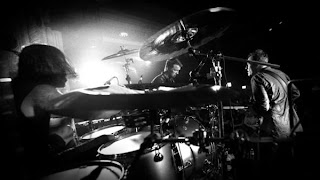 There are echoes of Cream and the Zeppelin as well on "Reptiles," the coked up tempo and quick sonic changes to the guitars and vocals duplicating the urgency of needing a quick fix. Is that a little Ziggy Stardust mixed it? Grohl’s powerhouse drumming allows JPJ to lock in with him the same way that he did with Bonham: both can keep the train a rollin’ while adding textures and fills that elevate the rhythm way above ordinary. It couldn’t tell you a damn bit of what "Reptiles" is about  and I could care less. Just that at high volume the song leaves you exhausted. "Elephant" offers some of the same sensibility, and bashing riff fest that pounds you a mere two minutes into the song. You weren’t coming here for power ballads were you? You knew that, right? (The break in "Elephants" sounds like Homme has been at the Alice in Chains collection by the way)

There is almost no concession to pop sensibility here. The band is ready to rock and rock their way, fuck the rest of you. Homme, the least decorated of the three is also in the drivers seat as the voice and guitar of the group, but its clear in the song structures and playing that Grohl and JPJ have their say. The powerhouse drumming/ bass guitar lock in on Reptiles and the breakdown/bridge section of "New Fang" both have elements of classic Nirvana and Zeppelin that its obvious to hear.

One thing that these musicians know is tension, and "Dead End Friends" carries a foreboding and menace that is missing from so many songs. Homme’s delivery is perfect, his guitar panned both far right and far left and for the first time there are both elements of the Seattle minor chord structure mixing with the 70’s classic rock. Grohl is playing all over his kit by the end and it sounds like old skool Nirvana without Kurt losing it up front.

Gunman funks up their guitar line, but to what effect? You have the loudest and one of the heaviest rhythm sections playing behind you and its like standing in front of a sonic locomotive. The guitar plays a distant second here, while its spacey vocals carry the melody line and a fuzzy narrative. The chorus is practically a moment with a stoned Keith Relf from the late period Yardbirds. Do I see lava lamps on stage? Oh yes I do.

There are at least two tracks, "Warsaw" and "Interlude with Ludes" that could and would have been left out had this been committed to vinyl, and neither add anything new. The closing track, "Spinning In Daffodils," topping 7 minutes lays bare their past and their present: from the gentle guitar to open the song, to a powerful driving middle that takes less prisoners that early Iron Maiden to a breakdown at then end that turns the band into minstrels passing through the studio, it is a study in exhausting every ounce of energy out of both the listener and the musician alike. Even as the guitar fades out towards the end, JPJ gets of two quick bass fills that would be beyond most ordinary mortals, much less 6:45 into the song.

These Vultures mean business, and whether it’s a one off or there will be other Vultures albums, makes no difference here. They rock hard, do it on their own terms and leave few entrails in their wake. Pick it up, spin it, see them live if you can. Its quite a merging of past, present and future.

Perplexio said…
I like the depth you go into! I enjoyed the album but I haven't listened to it lately. There's a jangly raw dirtiness to the music that I dig though. This sounds like the kind of album Velvet Revolver was TRYING to make but fell short of... twice!

YourZ said…
I have played this pretty much non-stop since it came out and it continues to excite me. I'm mighty pissed I didn't get to see them live - tickets sold out at lightspeed then doubled in price on Ebay. Bastard scalpers!

I can't honestly think of a better super-trio since Cream and even then, I think TCV give them a huge run for their money.
January 29, 2010 at 4:10 PM

Chris said…
I caught these guys live this weekend after seeing AC/DC the night before. Both were amazing experiences.
January 31, 2010 at 3:42 AM

Dimaension X said…
"Without the virtuoso guitar hero, Homme plays the rhythm and the textures and riffs, but doesn’t fill the space the way that Jimmy Page did ,..." I think this is what bothers me the most about a lot of these albums nowadays, ... where are the real guitar heroes?

I find myself waiting for THAT guitar solo to come, and it never does. Same deal with the band Clutch.
January 31, 2010 at 5:52 AM