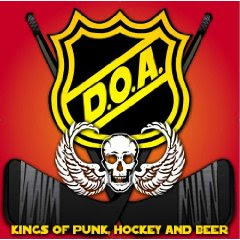 Little lead-in needs to be written about D.O.A., the legendary punk outfit from north of the border in Vancouver practically invented hard core punk.  Formed in 1978, Joey Shithead has been running his ragtag outfit of neuron-missing-crazed misfits for thirty years now. And based on the raging raucous the lads drum up in this loose compilation of recently recorded (and newer unreleased tracks) he has no intention of either slowing down or growing up anytime soon.  And that suits us just fine.

At the Ripple, we love punk, we love hockey, and, oh yes, we love beer.  Then what could be better than an album full of nothing but punk, hockey, and beer?!  And that's what you get here.  Don't go looking for angry anti-corporate statements, Joey Shithead's famous political rants, or deep evolving theory about particle physics and its role in the ever-expanding universe, with this album, the title says it all and hits you smack in the face with all the subtlety of a vicious crosscheck to the face.  Blood and teeth spilled across the ice indeed!

D.O.A. invented "Hockey Rock," with their pulsing 1987 remake of BTO's "Taking Care of Business," which is squeezed onto the end of this disc, and fittingly, the hockey songs roar.  I mean bone-crunching-body-check-at-center-ice roar.  "Donnybrook," is about as much fun as Monster-drink-hyped up sports-themed punk can be.   Testosterone-raging, revved up, spitting, sneering, and totally raving.  Joey Shithead's vocals seem as uncontrolled as ever as he rails about a hockey game gone out of control, leading the riot squad to be brought in to sort out the mess.  I played this song for my 16 year-old, co-hockey fanatic son, and he flipped.  We're not talking about as much mass appeal as some watered-down, corporate homogenized punk, like Blink 182 or Green Day.  This is the real deal from a band of true punk pioneers and survivors.   D.O.A's version of the infamous "The Hockey Song," revels in their love of the game and speed guitars.  "Beat 'Em, Bust 'Em," is a hockey fight set to music with about as much nuance as an uppercut to the jaw.  Five minutes for fighting?  Fuck no.  This is punk baby, roaring at you in a touch more than 3 minutes of hyper-charged guitar and screaming chaos.

The drinking songs follow suit with such ditties as "Beer Liberation Army," or "Cocktail Time in Hell."  Other standouts include the demolition derby in hell riot of  "Devil's Speedway," and the pure punk spirit of "Logjam."


Kings of Punk, Hockey and Beer delivers one giant loogie of fun, spit right into the face of all D.O.A. fans, bristling and raging with all the brim and phlegm you'd want from your legendary punks.  Tons of attitude, loads of chugging guitars and, oh yes, blood and teeth everywhere.

With the Olympics coming to Vancouver this year, I can only wish the city well.  D.O.A. are still alive and fighting, and oh God, the carnage to follow . . . 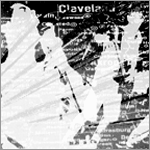 Never having heard Face Value before, and being relatively ignorant of the early '90's Cleveland hardcore scene, this disc blew me away.  Let's forget that it's a freaking mammoth undertaking, compiling nearly the entire recorded output of this long overlooked outfit, and let's forget that it comes as a CD and DVD digipack, giving you just about as much smash-face, elbows to the gut hardcore as anyone could reasonably expect for their money.  Yes, let's forget all that for a minute and just concentrate on the music.

This massive collection comes to us from Smog Veil Records, amazing chroniclers of punk and the Cleveland Scene, and has been in the works for an eternity, finally seeing the light of day.  In it's 31 tracks of blistering, gut-wrenching fast and brutal hardcore are included 1991's The Price of Maturity LP, the Coming of Age 7" (1990), four songs from their final full-length, Kick it Over (1993), and their first demo from 1989.  That's a mass of punk for you.

Dropping this baby in the player, beware.  First of all, make sure you're on good terms with your neighbors, because they will hear it and they will be frightened. As in call the cops frightened.  Face Value could play the crap out of their instruments, and tucked tightly within the 1 or 2 minute compositions are a stunning amount of top-quality riffs, histrionic vocals, and, yes, true blazing guitar solos.  The Price of Maturity LP, kicks off with "Men from Boys," a bass-massive terror of pure, unadulterated hardcore punk.  Kicking off with a mania of drums, the bass is greasy and heavy. By the time the crunching guitar chords kick in, I'm already hooked.  When the song launches off into a hyperdrive of punk raving, complete with true tempo changes, bass breakdowns, and gangland vocals, I'm in love.  From there, the entire album is an non-stop assault on your senses and ears.  Bleeding is not an option here.  You will.  Accept it, love it, relish it.

To me, the standout tracks are from the The Price of Maturity album, which contrary to its name, shows a band maturing amazingly well, as songwriters, musicians, and performers from their earliest demos (also included here.)   "Excommunication," fricking terrorizes, sounding very much like something my Ripple brethren the Pope would've sung with his old band Blind Justice.  A total rabble rouser.   "The Price of Maturity," shows off the immediately recognizable vocals of frontman/legendary Cleveland icon Tony Erba, amid a nuclear assault of punk carnage.  But listen closely, and you'll see why I'm so excited about this band.  The song is only 2 and a half minutes long, but in that time they manage to start off with a frenzied punk attack, break it down in the middle with some truly juicy bass, then blaze off into some serious guitar wizardry and soloing, before launching back into the punk.  All of this is done without ever feeling rushed (more than it's intended to) or forced.  It's just exceptional craft.   And the rest of the album is just as beautifully done.  How these guys never made a bigger name for themselves in their day is beyond me; a crime of huge proportions.

In addition to the 31 career-spanning tracks of the CD, the DVD includes a number of blistering cuts from various live shows between 1990 - 1993, even tossing in a handful of otherwise unreleased songs.  A true plethora of punk  You like punk?  You like hardcore?  Do yourself a favor, buy (don't download) this baby.  Hold it in your safe sacred spot and cherish it.