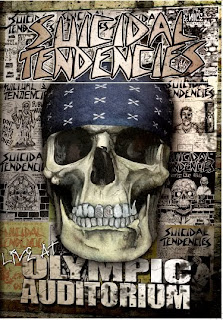 Since their beginnings in Venice, CA in the early ‘80s, SUICIDAL TENDENCIES have led the charge in the skate punk/thrash metal movement, consequently influencing an entire generation of bands along the way.

Now all true fans get a little post-Christmas treat. Live At The Olympic Auditorium, SUICIDAL TENDENCIES’ first ever DVD release! The DVD will street January 26, 2010 via the band’s own imprint, Suicidal Records. The approximately 80-minute DVD features 16 tracks including ST classics “Institutionalized,” “War Inside My Head,” and “Possessed To Skate” and captures Suicidal in their most natural environment: Onstage, uncensored and ready to tear you to shreds.

Elaborated ST founding vocalist Mike Muir: "The band started getting emails from some crazy guy that always said, 'I know you'll probably think I'm crazy, but I'm not. I'm wanna book ST for a show and I got this idea...'. Well, one by one we shot down the 'unique' ideas until one time he emailed and said the Olympic Auditorium was being bought by a Korean Church. Shouldn't it be sent off with a special last gig? The band agreed and then the work began. The promoter -- Evel Dick Donato who went on to win Big Brother -- tells a bit about the show, making of etc. on the intro. Lots of drama, none more than the day before the show when I woke up and couldn't walk. But the show must go on and the back surgery would have to wait till afterwards. Suicidal recorded Live at the Olympic Auditorium in front of 4,000 Cycos...but now you can enjoy it in the safety of your living room."