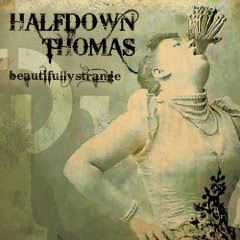 Here I am, minding my own business, going through another stack of CDs from the hands of Racer X, when I find myself listening to two albums that both have their feet in the big sounds of the ‘80’s rock and the alternative guts of the mighty Stone Temple Pilots sound from the ‘90’s. Get out yer lighters and lets listen to these together:

Halfdown Thomas’ newest album Beautifully Strange has a huge meld of sounds, giant waves of clipped guitars with endlessly soloing guitars layered underneath, the powerfully sung vocals of Randy Ayers reminding you of a number of great rock singers. He echoes STP front man Weiland on Self Centered by bringing himself down into the mix and adding a level of menace to the proceedings, while the lead guitar of Wesley Smith hits a terse and edgy solo. "Come Inside," the opening track echoes the STP production, sending the instruments of the band up to 11 and hitting you with a wall of sound, before the Ayers growls out the chorus.

With their roots in the ‘80’s its no wonder that they do the power ballad well, and the echo laden guitar intro of the 4th track, "Way Down," takes us to familiar territory. But just because its familiar, doesn’t mean that it doesn’t have beautiful scenery. These boys from Alabama love to rock too much to not add some power chords to the proceedings, lending this quiet song with a lot more bite that you’d expect. Overreaction reverses this, with it menace and bit in the lyrics before hitting those major chords on the oh-so-singable chorus. It also has a interesting solo by Smith that doesn’t ride on top of the band so much a crouch in the back and work its way out.

"Trigger Finger" does a great job of harnessing the band’s energy and letting it out it controlled bursts, drummer Mark Underwood shines on the complicated tempo changes here, because the band is also channeling the minor key sounds of the Seattle crowd on the song. It’s a complicated and challenging song with more smarts than your average rock song will ever have. "Beautifully Strange," the title track, mines the hook laden work of Collective Soul for its chorus with a lyrical hook all its own.
Beautifully Strange knows that we bought the record to get the rock, not to chill out, and it doesn’t disappoint. No doubt opening and sharing the stage with Black Stone Cherry and Fuel has helped them hone their music. Get the disc. 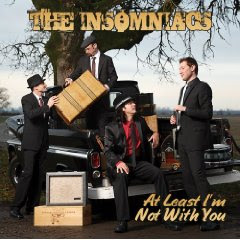 The Insomniacs – At Least I’m Not With You

The Insomniacs take the best of the blues bar band and embue their songs with some craft and technique and polish without ever losing the beauty of what makes this music so immediate. Pacific Northerwesterners from Portland, the clean up the sound and kick out a great mix of slow blues, jump and swing.

Uptempo jump blues open the album with "Lonesome," and band fills up the bar. Well produced, we can hear the band clearly, and as the great blues solo by Vyasa Dodson bleeds into the harmonica, you know that you’re in for a good listen. Crack open a cold one, or better yet, get the pretty bar maid (without the pick up lines thanks, she’s heard them all) to get you one, tip her well, and lets listen. If "Lonesome" makes for good listening with its guitar/harmonica center, "Broke and Lonely" chugs along with a great barrelhouse piano solo in the middle that holds its own against the understated drumming of Dave Melyan. "She Can Talk" is a great little jump number about THAT girl, while Angry Surfer mixes in more than a little Dick Dale guitar along the way.

"Directly From My Heart To You" is pure catch and release blues, the back beat rising and swelling as singer Vyasa Dodson sings of yet another love that is all too far away. Familiar territory, yet guitarist Dodson imbues the solo with some wicked vibrato and double stops and takes it beyond the average bar band 12 bar solo. Technique counts for something here. They slow things down even more on "Hoodoo Man Blues" and "Description Blues": slow blues with the crying notes from a telecaster, a harmonica that just lost both its parents AND its dog. The band never overplays, keeping a perfect touch to the song, even as it builds to the sweet crescendos of a harmonica weeping (ably played by Mitch Kashmar on "Hoodoo Man Blues").

"Maybe Sometime Later" opens up with its staccato guitar, farfisa organ swells and snappy backbeat, and shows off their songwriting and arranging smarts. The arpeggio and blues fills on guitar compliment the sharp rhythm section. The guitar is brought down in the mix allowing the rest of the band to carry the weight of the song until Dodson burns into an Iceman Albert Collins influenced solo.
The Insomniacs have a rave up on the "Root Beer Float," double time drumming, the guitar chugging along with a fun little riff, when the keys pick up the baton for a melodic solo (and lets not forget Dean Mueller on bass walking up and down the neck making everyone else look good). Good clean fun while the singer gets a drink. Don’t they put these things in the set list just for that reason?

It would be tough to go wrong with a fun little album that takes its blues seriously and its fun even more seriously. My next road trip to Portland? I’m scheduling a night out… Insomniac-style.

Buy here: At Least I'm Not With You