Fallen Martyr - The Six Roots of True Will 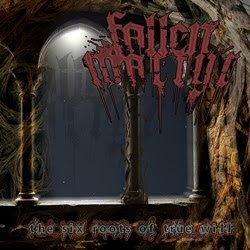 We’ve made it a policy here at The Ripple Effect to never post negative reviews about a band, especially if it’s an unknown unit who no one would care about anyway. Really . . . what’s the point of railing on a group that you’ve never heard of in the first place? It’s a rather pointless act. However, in recent weeks, something has come over me and I’m taking it upon myself to bend the policies that we’ve worked hard to enforce. Always the rebel, I know. This case is a little different because this band is not terrible, in fact, as far as musicianship goes, they could play scales around me with their eyes closed, pack me in a box and mail me to Madagascar, and beat me with a lead pipe before I could utter my name. But most importantly, there are some ideas within this EP that have some serious potential. I hear what they’re trying to do, but it’s almost like they’re missing that last, all important piece to the overall puzzle.


Fallen Martyr’s EP The Six Roots of True Will is jam packed with riffs that will boggle the mind in their complexity, but unfortunately, the overall sound is mired in a constant one dimensional blast beat and vocals that sway from angst ridden bellowing to off key crooning. “All In” shows the greatest potential with the band incorporating some nice dimensional qualities . . . breaking down the riff, changing it up by adding more clean tones and subtle textures, but the off key clean vocals make the hair on the back of my neck stand straight up, and I grit my teeth through the pain. Again, I hear where they’re going with this, but the execution misses the mark. I’m not exactly sure if one would categorize their sound as metal-core or demonic math-rock or what, but it’s pretty straight forward and doesn’t deviate stylistically from one song to the next. If you like it flat out brutal and ugly, well, Fallen Martyr should fit the bill and may intrigue you with their more progressive leanings. And like I said, it’s not all bad and there’s enough positive stuff going on that I think these guys can build on what they’re doing, specifically in the use of dynamic changes. Keep an eye (and ear) out for these guys. I wouldn’t be surprised if their next release is a major step in the right direction. - Pope JTE

Anonymous said…
I liked Fallen Martyr when I just saw them live.

I think what you're seeing is the things getting in the way of being a band at the highest level. That's why I always like digging through the newest, most independent music regularly because that's when you can really get a sense of what's flooding the local scene and genuinely catch the good apart from the volumes of crap.

Anyway, I took the time to comment here because I wanted to point to other alternative reviews of the same EP, and add a word of caution of lumping fallen martyr in with the bad. Obviously this is my own biased opinion, but I tend to agree with some of the other fallen martyr reviews I've read.
February 18, 2010 at 10:27 PM