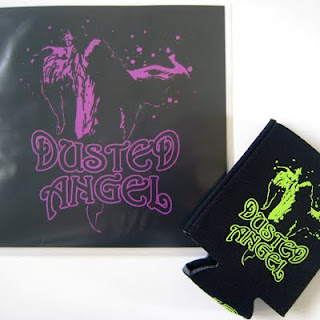 Dusted Angel is one of the best band names I’ve heard in awhile.

But what’s even better is that Dusted Angel includes vocalist Clifford Dinsmore and drummer Bill Torgerson from Santa Cruz hardcore legends BL’AST! Just a few months ago I rediscovered the joys of the 3 albums they made for SST in the mid to late 1980’s and wondered what became of this beast. I always had a soft spot for BL’AST! because they were one of those bands that were too noisy and fucked up for the thrash metal crowd, but too metallic for a lot of punks. They definitely picked up where Black Flag left off on Damaged but made it even heavier.

Then out of nowhere, Dusted Angel appeared. They formed in 2008 and have just released their debut 7” single on Corruption Recordings. It was recorded by Billy Anderson, who is well known for his work with High On Fire, Neurosis and Melvins so you know this is heavy. And it is. The production is impressive – heavy but not detuned indecipherable sludge. The string section of Eric Fieber (guitar), Scott Stevens (guitar) and Elliot Young (bass) blend well to make the riffs heavy and catchy. Bill’s drumming is powerful and creative. Clifford’s vocals, as always, are intense, angry and distorted.

Side A is “The Thorn,” an almost 6 minute song that starts off slow and doomy before picking up speed at the 2 minute mark when Clifford’s vocals kick in. The influence of Black Sabbath, Saint Vitus, etc is strong but delivered at hardcore punk intensity. This is what it sounds like when old punks grow old and stay pissed. “Valium 5” is on the flip side and is just as heavy but a little faster and angrier. Clifford really lets loose with some intense wails. The song ends with a big explosion. If you buy the single through itunes there’s a bonus track, an instrumental called “Purple Jesus” that sounds like a cross between “Process of Weeding Out” era Black Flag and early Iron Maiden.

So far Dusted Angel has shared the stage with Kylesa, Saviours, Black Cobra and have upcoming shows with Nebula and Saint Vitus. As good as the single is, I’m sure these guys are much more potent on the stage. Hopefully they’ll be able to do some national touring (come to Brooklyn, please!) and put out a full length soon. Get dusted!