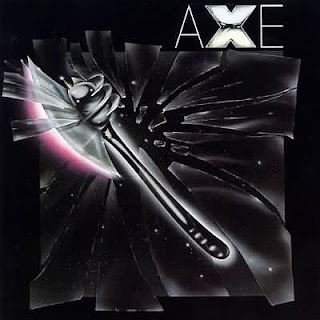 It seems I’ve been a rippler all my life.  From the first moment I took my third-grade paper route money, walked into downtown Danville with a beeline towards the town’s only record store, then plopped my hard-earned change onto the counter, walking away with a brand new Jim Croce single, “Time in a Bottle,” it seems like my main passion has always been to find more music, new music, music I’d never heard before but couldn’t get enough of.  Soon, my passion led me to commit weekly pilgrimages to Berkeley where I’d spend my day digging through the dollar vinyl bins at Rasputin’s and devouring Blondies pizza; a ritual Pope and I keep alive to this day.  And it was on one of those long ago digging trips that I first stumbled upon this gem of an album, tucked deeply inside the dollar bin behind a copy of Barry Manilow’s Greatest Hits and a 10 CC album.  While most of my friends were digging on REO Speedwagon or Journey, Axe quickly became my private treasure, my secret stash, one of my favorite bands.

Axe’s career never quite reached the epic proportions of those other bands, probably because their macho name and album art conjured up images of massive walls of heavy metal, when in reality their sound was much more melodic and MOR.  While they did eventually toughen up and put out a more metal sounding album (their biggest hit Offering) it’s in this debut, in all it’s melodic MOR glory that Axe first shone bright.

Admittedly, the album starts off kinda dicey.  “Life’s Just an Illusion,” is as strong an opener as you could hope for, but still only hints at the true treasures that lay inside.  That’s not to say “Life’s” a bad song, it’s not.  In fact, “Life” may be better than the entire output of most of the other melodic rockers of the time, and it displays some of what prove to be the best of Axe’s traits.  Stuttering guitar work leads us into the main, truly bass heavy riff.  Bobby Barth was a tremendously under-rated singer; his voice thick and gravelly enough to be interesting, but still intensely melodic in tone and capable of filling out enough range to match the emotional content of the songs.  Of Axe’s three songwriters, Barth was also the most likely to search for meaning in his lyrics, digging for a deeper truth.  While we’re not talking anything too heavy or mind-blowing here, there is a simple beauty to Barth’s gentle advice and spiritual truth, “Life’s just an illusion/don’t fill yours with pain.”   The only real drawback here is the prominence of the keyboards which veer the song off into the pomp territory of a band like Zon, when in reality Axe was so much more. 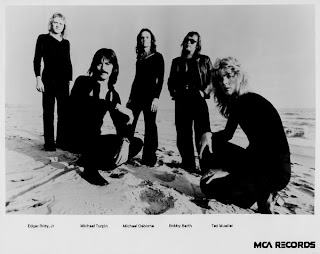 If “Life,” hinted at a pomp underbelly, “Hang On,” exposes it naked and bare and ugly for all the world to see.  About as dated as any song on this album, with its huge attack of keyboards, even back in it’s day it was out of place, hinting more towards a Styx fixation than the real heart of Axe.  But don’t worry, that heart beats strong and intense and reveals itself in full body on the next tract, “Sympathize.”   From the first second I heard this song, I was in love.  There’s something infinitely menacing and ominous in the opening riff, something mean and nasty.  Dirty and angry.  By the time the opening guitar solo kicked in, I was hooked.  At their best, the twin guitar masters of Axe, Barth and Mike Osbourne, managed to capture a totally unique guitar tone and attack that I’ve never heard either before or since.  Their notes were thick and meaty, with long sustain.  A totally unique tone that was really an Axe trademark.  Here, Barth exploded through the microphone, his voice as gravelly and roughened as you’d expect from a man totally at his wits ends with a woman who’s abusing their love.   The main riff is massively chunky, leading to a slowed down chorus, before erupting again into a twin guitar attack of monstrous proportions.   Forget the boppy pomp of “Hold On,” this song is about as “don’t-fuck-with-me” as they come.

Osbourne takes over songwriting and lead vocals for “How Come I Love You,” without the band missing a step.  Every thing that they’ve revealed so far in “Life,” and “Sympathize,” is still there.  Huge, bass-massive, staggering riffs and thrilling twin guitar lead breaks, all wrapped up in a melody so strong it stays in your mind as if it’d been carved their in stone.  As opposed to Barth’s searching lyrics, Osbourne’s tended towards the more straight ahead “man love woman, woman leaves man,” variety, but he sings them with enough conviction and rasp in his voice that they don’t go down as saccharine.  Barth finishes off the first side of the lp with “Forever,” as beautifully melodic a love song as their was never-heard in the ‘70’s.  Forget Styx and “Lady,” this is the song that should’ve made the girls swoon at high school dances.  From Edgar Riley Jr’s gorgeous piano work, all the way to the big guitar solo outro, this song was placed firmly in the power-ballad territory years before Poison was ever “credited” with creating the format.

What side one hinted at, side two delivers in spades.  “Back on the Streets,” is a pure adrenaline-soaked scorcher, a rocker of fiery intensity with its terrorizing guitar leads and big thumping bass.  Barth, as always, gives a masterful vocal as he plows a theme he’d later re-explore to staggering success with his biggest hit “Rock and Roll Party In the Streets,” off the Offering album.  Here the song builds and builds.  Check out that lead break midway through!  Man, this song was the subject of hours upon hours of air guitar concerts in my bedroom through high school.   “Doin’ the Best I Can,” follows next without missing a beat.  If Loverboy or Survivor had produced this melodic rocking gem it would have topped the charts, but that wasn’t to be the case.  Instead, Osbourne gives an honest, impassioned performance that still boasts enough meat to give it some headbanging moments.  And again, no one ever matched that Axe guitar tone.  Just listen for it on the lead breaks at the end of the choral verse. 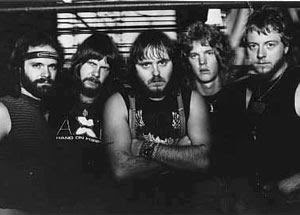 “You’re Out of Line,” recaptures, in all its spitting glory, the nastiness of “Sympathize.”  Essentially a love song, the tone is anything but.  Big beefy guitars, swirling keyboard fills, chugging, stuttering riffs, and Osbourne’s most emotive singing.  I can’t think of another melodic rock band that could bring such intensity and roughness to their songwriting, and maintain such remarkable melodies.  Certainly many tried, few succeeded.  “Battles” ends the album with one of Barth’s most remarkable songs.  Epic in every sense of the word, I remember hearing this as a kid and marveling at the layers and layers as the song unfolds.  A weary soldier longs for home, beaten and broken, but not without hope as he heads back out onto the road.  It’s all metaphor, but it works. Imagine a Lord of the Rings epic flavor without the sword and sorcery nonsense. Just honest, plaintive longing for home and peace.  Brought in gently with a simple yet effective medieval-hinted keyboard, sounding like a lone flutist on a hill, acoustic guitars come in next, softly, plaintively.  Barth’s voice is as weary as you could ask for as he sings “A warm wind blowing memories makes me long for home/but a cold wind blows much harder and makes me want to roam.”  Slowly, the song builds in intensity, the drums picking up, the bass leading us on.  Harmony vocals add to the sense of isolation, as Barth sings on, his voice cracking and leathered like a blistering desert floor.  Finally, the guitar we’ve all been waiting for comes in, at first restrained, almost jazz-like in quality.  It still carries that tone, that singular Axe tone, as it builds, like a David Gilmour solo, gaining in intensity.   Finally, big chords crash through the mix, as we head towards the big finish.

Axe would go on to record one half of a great album- side one of On the Edge (side two is throwaway including a horribly ill-advised cover of “Sugar Pie Honey Bunch”) - before toughening up their sound and finally breaking through to the national stage with Offering.  And while that album clearly rocks, in the end, it lost some of the charm that made the debut so endearing to me.  Like most of my favorite bands, Axe defied categorization. Too melodic to be hard rock, it was too hard rocking to be pop.  But in the end, that’s what it was, a glorious starburst of hard rocking, heavy handed MOR pop, with melodies and savagery too spare.

For fans of big melodic rock, this one is well worth tracking down.


You're Out of Line