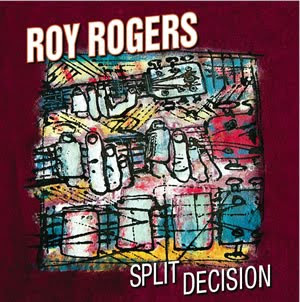 Last night the temperature fell into the 20’s F after a hellacious rainstorm. Windows frosted. Lawns froze. Snow appeared on the hilltops down to 500 ft. above sea level. The news warned us to insulate our outdoor pipes and settle in for a blast of bitter Alaskan cold. Quite different for the Bay Area.

,” grabbed a cup of coffee, pulled a blanket around my shoulders and settled into the recliner. I was ready to listen to the slide guitar country and delta blues master.

Then something odd happened. Roy hit me with something quite different - rock, contemporary blues, folk and jazz. Was this the same Roy Rogers who I had heard dozens of times with Norton Buffalo and/or with his band the Delta Rhythm Kings? The slide guitar is majestic. The band behind it is tight. The songwriting and vocals are precise. But, this is a different, expanded, Roy Rogers.

I took off the blanket and went in search of the album liner notes. Of course, there was Roy with the Delta Rhythm Kings. But there was also Roy with jazz guitarist extraordinaire Ottmar Liebert on a beautiful jazz instrumental "Your Sweet Embrace" that Roy wrote. There was Roy playing percussion and piano, in addition to guitar, on his song "River Of Tears." Just when I thought Roy had settled back into the country delta blues sound for which he is known, he plays his instrumental, "Rite of Passage," a jazz tune with Brazilian sensibilities beautifully accented by the tenor saxophone of George Brooks who is known for his work with the likes of Etta James and Larry Coryell. 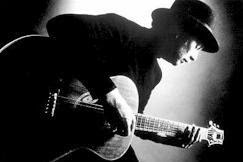 There is still plenty of the country delta blues Roy on this album. Listen to "Patron Saint of Pain", "Little Queen Bee," "Bitter Rain," "I Would Undo Anything", "Holy Ghost Moan" and "Walkin’ The Levee." There is even a hard rocking Roy on "Calm Before The Storm." However, it is clear that this is a different type of Roy Rogers album.

The focus is not only on Roy’s exceptional slide guitar – it is also on his songwriting. Roy wrote, or had a hand in writing, every one of the songs. This is an exercise in mood. The song "Bitter Rain" opines on the tragedy of Hurricane Katrina and its effect on New Orleans. The remaining songs are much more personal and concern ruined relationships, lust and regret – the bread and butter of blues and country music. They are not just good songs – they are exceptional exposés. The jazz instrumentals fit comfortably and show a side of Roy that I have never heard before. Roy has grown and this album just continues to grow on me.

I got back in the recliner, pulled up the blanket, took a sip of coffee and hit replay – so will you.

Posted by The Ripple Effect at 1:41 AM