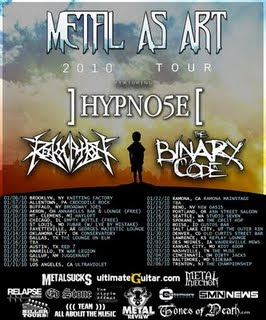 Yep, here at the Ripple we're just giddy about this. After all this is the very first tour we've had a hand in sponsoring and the line-up is leaving us drooling in little fanboy puddles.

To make things even better, HYPNO5E has just announced additional US tour dates to their headlining run on the METAL AS ART Tour. HYPNO5E will be teaming up with REVOCATION (Relapse Records) and THE BINARY CODE for the month long run. A list of updated tour dates is below.

The new HYPNO5E album is in the works, and all instruments are complete. The band is currently out in South America working some samples for the new album, and will be returning to France soon to track vocals. Stay tuned for additional HYPNO5E US tour dates to surface in the near future. The band has a big tour machine plan in the works. . . 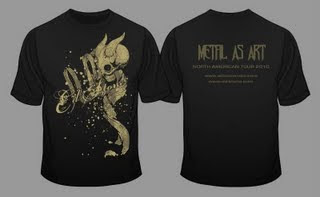 The METAL AS ART Tour has a whole host of sponsors that we couldn't be more thrilled to be working with, including Ultimate-Guitar, MetalSucks.net, SMNnews, Metal Injection, Killer Tours, Metal Review, Team All About The Music, Tones Of Death, Roxwel, and Ed Stone Rockwear who’ll be giving away exclusive METAL AS ART t-shirts to two lucky winners at each show.

For your chance to win METAL AS ART tickets, head over to KillerTours.com: http://www.killertours.com/contests

To whet your appetite, HYPNO5E’s debut, Des Deux L’une Est L’autre, can be streamed in its entirety at the band’s official myspace: http://www.myspace.com/hypno5e

Also, make sure to check out the official METAL AS ART myspace: http://www.myspace.com/metalasart

Read what the folks are saying about Hypno5e:

“From breakdowns behind classical female vocals to gut-wrenching screams and syncopation, the band covers more ground than Rambo ripping through a jungle… A surrealistic venture through several genres of haunting ass-kickings, because this is an album meant to frighten, impress, and envelope the listener.”

“Experimentally proggy, technically over the head, and brutal all at the same time, these guys hear music in their own unique way and aren’t afraid to stretch their sound to distant and, as of yet, unimaginable dimensions... This is the type of album that will make you question all that you know, or think that you know, about music… ”

“Sludge, death metal, electronica and dark ambiance meet under the umbrella of progressive rock to envelope the listener in an oppressive, obscure soundscape that juxtaposes the beautiful with the grotesque in a seldom-heard-before way.”
Posted by The Ripple Effect at 12:29 AM