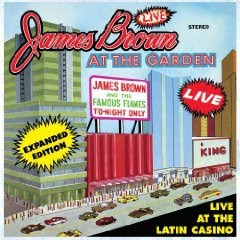 Despite the title, this was not recorded at New York’s Madison Square Garden or any other venue with Garden in the name. It was in fact recorded at the Latin Casino in Cherry Hill, NJ over a stretch of dates in January 1967. When it was originally issued it was marred by fake crowd overdubs and edited jams. At long last, this classic album has finally been issued on CD with over an hour of unreleased music. If you’re a James Brown fan or a soul music enthusiast, it’s an essential purchase.


Disc one presents the original album but without the dubbed crowd. That alone right there is worth the price because you get a killer but compact taste of JB and his awesome band in full flight and an excited crowd. 1967 is also an important year for James Brown. After revolutionizing music with “Papa’s Got A Brand New Bag” in 1965 he was about to do it again in May 1967 with “Cold Sweat.” Both songs featured very little in terms of chord changes or musical sophistication but had incredible rhythms that had never been heard before. Musicians and record producers literally didn’t know how to respond to the challenge that James issued them. This live album catches JB in transition from more traditional R&B and creating what would be termed Soul and eventually Funk.


Older songs like “I Got You (I Feel Good)” and “Bring It Up” are done much faster than the recorded versions and ballads like “Prisoner of Love” are played slower. Without the fake crowd dubbed in, you can hear the interaction between JB and the audience. When the band goes into a fast vamp or solo section and the crowd roars you know James is doing some outrageous dance maneuver with The Famous Flames. When he says he feels so good he wants to scream, the audience goes nuts and screams with him. And this is at a swanky dinner club in suburban New Jersey, not the Apollo Theater in Harlem.


“Ain’t That A Groove” and “Hip Bag ‘67” (an excerpt of the jam during “Papa’s Bag”) are extended features for the supremely tight and talented band. Alfred “Pee Wee” Ellis (tenor sax) had recently become musical director of the band and had a strong jazz background. He got to work with the amazing Jimmy Nolen on guitar, the powerhouse drummers John “Jabo” Starks and Clyde Stubblefield and all the other top notch musicians. No deadweight in JB’s band! 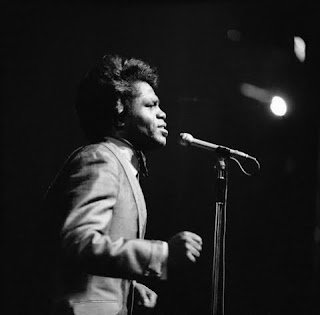 Hardcore James Brown fans will wet their hot-pants over the extras at the end of disc 1 and all of disc 2. Everyone knows that James was a great singer and entertainer but most are unaware of his musical skills. Before the main event, James would come out and join the band and get down on the organ to help warm up the crowd. You can tell he’s already sweating all over the keys during the first song “The King” before a spirited take on Ramsey Lewis’ “Wade In the Water.” “Night Train” ends the warm up set and then James would take a break.


If you’re ready for STAR TIME, then pop in disc 2 and get ready for a full set of uncut energy exactly how it went down over 40 years ago. The energy level is unprecedented and remains unmatched to this day. James starts off the show with a fast medley of “Out Of Sight” and “Bring It Up” before drastically slowing things down with “Try Me” and “Come Rain Or Come Shine” (featuring Miles Davis bassist Ron Carter). “Papa’s Got A Brand New Bag” is much faster than the original record and clearly points to the direction he was about to unleash with “Cold Sweat,” “Mother Popcorn,” etc. The band stretches the groove out for almost 10 minutes and it never gets dull.


The ladies in the crowd audibly swoon when James and the Flames harmonize on the ballads “Prisoner of Love” and “It’s A Man’s Man’s Man’s World.” The Famous Flames were at one point 3 voices plus James, but at this point it was just Bobby Bennett and Bobby Byrd. Soon James would get rid of the Flames and drop songs like “Maybe The Last Time” from the show so it’s nice to hear James saying farewell to the past. Of course, Bobby Byrd would remain with James for years to come and his voice would be loud and strong on many hits to come.


The show wraps up with a triple whammy of “Ain’t That A Groove,” “Please, Please, Please” and a reprise of “Bring It Up.” You can hear the crowd go wild as James tries to leave the stage while his valet tries to put a cape on him and get him off the stage. They’re not having it. Even though James worked it into the stage act, he could make everyone believe he was exhausted and had to go but the crowd riled him up he had to come back and scream just one more time. You don’t get showmanship like that anymore.


If that wasn’t enough, after the crowd left James brought the band back on stage to record his next single “Let Yourself Go.” There’s an instrumental jam, a false start and finally the master take that was released. How many bands can you think of that would even attempt something like that now?

Buy here: Live at the Garden

Posted by The Ripple Effect at 1:06 AM