For several months, hell . . . let’s just call it a year or so, we’ve been moving a lot of dirt around to uncover an entire ecosystem of musicians plying their trade and creating a sound that’s unlike any we’ve heard from around the world. I guess, technically, the world focus hit France with the discovery of Gojira, but the world media seems to only be paying attention to that which is creeping its way to the surface. For The Ripple Effect, our attention was grasped by two deformed, dirt encrusted, rotting hands in the form of Hollow Corp. It was with that discovery of Cloister of Radiance that we grabbed every digging device that we could wrap our own deformed and dirt encrusted hands upon, and began turning over the French countryside soil to discover even more incredibly dense and uniquely brilliant musical gems. Some were hand delivered by like minded soil movers, others made their way out of the darkened catacombs with their wee little mole eyes squinting in the harsh light of the sun, while others we found by unexpectedly poking them in the stomachs with the tips of our spades. In all, this French Collective of musically minded patrons of the sonic arts has stamped their own individual imprint onto the face of the French music scene. Though, some may not be as popular as others, they all have contributed a massive amount of emotion and creativity to this sect of the French culture.

Today, we have three bands, all hailing from France, and all providing their own unique touch to the music that they create. Put them all together and you get a glimpse of what this burgeoning music scene is like. Ripe with creative sounds, ambient textures, grinding low end, buzz saw aggression, and tormented vocals, the music covers a wide spectrum of emotion and artful expression. 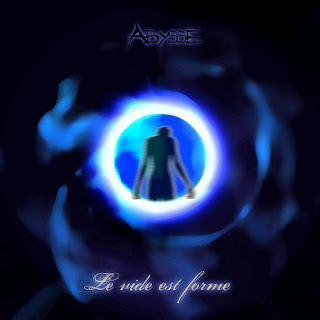 Deuces are wild on this EP from French underground ambient metallers, Abysse, as Le vide est forme clocks in at near twenty-two minutes and is only two songs long. Somewhat Opeth-ian in sound due to the fantastic transitions that they incorporate into the songs, shifting from melodically ambient passages to heavy detuned riffs then hopping over to another dimension of riff happy heaven, there is no question that these guys have the ability to transport the listener to completely foreign lands, and some that are not of this world. And here’s the wrinkle in the fabric of this tapestry of sound. There are no vocals. Much like I felt way back when I reviewed East of the Wall’s Farmer’s Almanac album, with so much going on in the music, sometimes taking out a seemingly important quality such as vocals is the best thing for the music as a whole. Quite honestly, Abysse say so much with the music that the human voice is unimportant in expressing any further ideas or emotions.

“Deviance” is a sprawling, epic, majestic piece of sound that is simply an amazing experience to listen to. High quality musicianship powers the song along the more melodic portions, such as the opening Middle Eastern influenced portion and then the heavy tom slamming break near the eight minute mark. I particularly love this latter portion as the guitars execute some beautiful hammer-on’s while the drummer is getting all tribal on our collective asses. This portion is a great mixture of primal aggression and delicate musicianship, and shows the layers of this bands understanding of dynamics. As the song progresses even further, the dual guitars sharing harmonies and weaving the melodies through the heavy rhythms are simply ear candy. The conclusion of the track is orgasmic. All the tension that’s been building up over the course of the last ten minutes finally erupts, the toes curl, and Abysse leaves the listener in a mild state of confusion, breathless, and coated in goo. The least they could have done was bought me dinner first, but I’ll forgive this slight transgression coz’ it was good for me. I hope it’s equally as good for you. 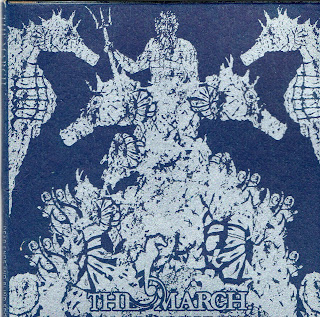 Five songs long, yet still clocking in at just about thirty minutes, this one is damn near LP length, but since it’s only five songs, I’ll go ahead and lump it in with the EP’s. The March are more of that kind of band that we found while digging in the rich and loamy soil of the French countryside opposed to the more refined and elegant bands. Dead Ends and Blind Spots is brutally heavy, detuned, distorted, and aggressive from here to eternity. Though there are some great moments of ambient flair and atmospheric beauty, this band is ghastly and oppressive. Listening to these guys while the sky is coated gray (or blood red) is the optimum way to hear them. Foreboding might be the best single word to describe the emotions behind their sound, because while you sit back and listen to this disc, you have to be overcome with the sense that something bad is about to happen. There’s a little edge of punk in their sound, namely in the aggressive manner of the emotional conveyance, but the overall sound is taking up residence in the metal spectrum.

Dead Ends and Blind Spots weaves back forth between metal and punk with effortless grace. “Find Some Rest” flitters in the arena of death metal ambience, clean toned guitars leading the song down a dark tunnel of despair, the drums echo off the walls in time with our rapidly rising heart beat, and then, nestled deep in the dismal and damp confines of this catacomb, the beast awaits. Vocals that vomit fear assail the senses and a din of heavily distorted and detuned guitars pummel the body into submission. And, just as terrifying a journey as this song has become, the ending is as delicately beautiful as it gets as the clean toned guitars return and carry our beaten and battered forms to a holier place. “Ancient Seed” is laced with a violent punk vibe. The chord progressions at the chorus, in particular, give this song a punk-y edge, but there’s so much attention to musicality that this becomes more of a progressive piece, some might even say post-punk. I think it has a nice level of complexity, mixing in great artistic elements of metal with a disenchanted punk rock attitude. In fact, the whole EP has great elements like this breaking out throughout its length. The nine minute disc closer, “A Last Breath” is a chaotic gem filled with high levels of musical proficiency and raw emotion, a burly piece of music that reminds me of the dark sonic qualities of countrymen, Eryn Non Dae., but with a bit more diversity and air for the music to breathe. 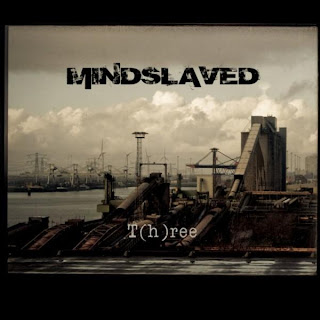 Also clocking in at a half hour, T(h)ree from the experimentalist ambient metal outfit, Mindslaved, is a sprawling masterpiece of raw emotion set to sound. And, it’s the kind of work that gets better and better with every subsequent listen. Layered miles deep, the sounds that encompass this work are majestic and the way these guys use textures to enhance the brutality of the metal is on par with the masters of the genre. T(h)ree is not a disc that benefits from passive listening. This is a work that needs your full, undivided attention because there is so much happening that to half listen to it, the full breadth of the music will inevitably get lost. As I sit back and listen to this EP, I can’t help but think of Hypno5e, maybe a little bit of Hacride, but more importantly, I hear a group of musicians who hear and create music in their own individualistic way. Odd time changes, incorporating clean tones with distorted ones, shrieking vocals that emote huge waves of passion and agony, in all . . . a turbulent expression of pain. It’s beautiful!

“Ischiopagus” is an amazing lesson is musicianship. Starting off as heavy as anything else out there, Mindslaved guide the song in a direction that I never saw coming. By working in a fantastic melody through the body of the distorted frenzy, these guys are showing this great contrast of heavy and light, and it all sounds so natural and effortless. Then, to make the ears perk up and the heartbeat increase, the rhythms kick in with an off time pattern that can sound jarring, but in its own way is as natural as being aboard a ship during a roiling sea. The riff kicking in near the 2:30 mark is simply brilliant. Tight hammer-on’s propel the riff while the rhythm section practically performs a piece that has no place in reality. And then, the chaos just vanishes and we’re left to listen to a gorgeous acoustic guitar that acts as a ray of sunshine in the middle of the storm. Truly a stunning piece! Following “Ischiopagus,” Mindslaved treat us to a beastly number in “Seek For Yourself.” Raging in off time rhythms, the band find a way of working compelling melodies to lighten the piece, but at the same time, creates a sense of tension and anticipation that something nasty is going to appear in our midst. These guys also do a great job of mixing in subtle nuances into their sound such as the second bellowing vocal on this track. Listen out for how these guys shift sounds from the right speaker to the left, and then back again. It’s a subtle effect, but the type of production trickery that keeps the ears listening for something new around each and every corner. The entire EP is littering with technically mind blowing approaches that will have you hitting rewind so that you can ensure that you heard what you thought you just heard.