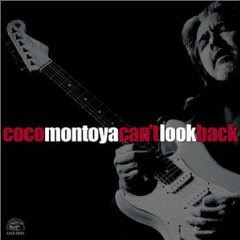 This is what happens when the legendary Albert Collins teaches his drummer to play electric blues guitar and he winds up playing for John Mayall’s 1980’s version of The Bluesbreakers. Coco Montoya is hot – so hot you can hear and feel the burn. He is also unconventional. Montoya plays his right-handed Fender Stratocaster left-handed but doesn’t restring it. The low E string is on the bottom – the high E string is on the top. If you haven’t heard Montoya’s 2002 release Can’t Look Back you have missed some of the most soulful contemporary electric blues of the 21st century.

From the opening track, "Wish I Could Be That Strong," you hear a gifted master blues guitarist at the top of his game. Coco not only sings and plays the blues, he feels the blues. On 13 sizzling tracks he teams with multi-instrumentalist, singer and recording engineer Chuck Kirkpatrick who plays rhythm and slide guitar. Known as Chuck Crane during his solo career, Kirkpatrick was a session musician at Atlantic Records in the early 70’s where he recorded with Aretha Franklin, Delany and Bonnie, Lulu, Petula Clark, Allman Brothers, Sam and Dave, Wilson Pickett, Esther Phillips, Eddie Harris and with Derek and the Dominoes on Layla. Add the late session keyboardist Tommy Eyre who appeared on records with Joe Cocker, John Martyn, Alex Harvey, Greg Lake, Gary Moore, B.B. King, John Mayall and Wham!; bassist Bob Glaub who has played for Jackson Browne; Don Henley; John Fogerty; Warren Zevon; John Prine; Bruce Springsteen; Crosby, Stills, Nash & Young; Dusty Springfield; Linda Ronstadt; John Lennon; Rod Stewart; and many others; a variety of drummers including former JD Crowe & the New South drummer Randy Hayes, former Firefall and Jaco Pastorius drummer Scott Kirkpatrick, and Tony Braunagel who has appeared with B.B. King, Bonnie Raitt, Eric Burdon, Ricki Lee Jones, Otis Rush, and Taj Mahal; and the Texacali Horns (tenor saxphonist Joe Sublett and trumpeter Darrell Leonard), and you have one of the most well-rounded and dynamic ensembles of hard working session musicians ever assembled for a blues album.

Montoya co-writes five of the tracks – "Running Away From Love", "I Won’t Beg", "Can’t See The Streets For My Tears", "Women Have A Way With A Fool" and "Back In A Cadillac­" – with David Steen whose songs have been recorded by Solomon Burke, Maria Muldaur, Dr. John, James Cotton, Junior Wells, Son Seals, Michael Burks and Ringo Starr. Steen also authored the title song "Can’t Look Back" and the song "Free." Montoya rocks "Something About You", written by Lamont Dozier and brothers Brian and Edward Holland who are considered to be one of the greatest songwriting teams in popular music having virtually created the ‘60’s Motown sound. With searing vocals and pulsating guitar licks Coco rips through "Trip, Stumble and Fall," a blues tune written by David Grissom and Stephen Bruton. He covers Lloyd Jones’ 1989 release of "No Longer Part Of Your Dreams" with aplomb. Montoya pays tribute to his mentor Albert Collins by playing a raucous version of Collins’ song "Same Old Thing." Just for variety Coco also turns country songwriters’ Rick Giles’ and Steve Bogard’s "Holding Out For You "into a blues masterpiece.

The album has an all-encompassing sound. The rhythm section provides tempos that envelope all of the speakers. The guitars and Coco are front and center. The keyboards and background vocals nicely fill in to complete the “Wall Of Sound” engineering. When the music slows you can hear Montoya’s Albert Collins licks. Yet, he adds plenty of himself to make each track his own. This is white soul blues at its best. Turn it on and I promise it will turn you on.

A friend of mine said that she Coco Montoya in concert and he was awesome!