A Waverider Writes - Dag Nasty and the Power of the Word

By now, you all should know that we at The Ripple Effect love music for a variety of different reasons. But one that seems to get forgotten in the midst of all of the sounds of the music is the words, and the affect that they can have on the listener. Recently, one of our long time readers, a Waverider, and influential being in his own right, came to us after a conversation we all had about the band Dag Nasty. He provided us with a moving piece that he had written about personal strength and eventual understanding based on the lyrics from Dag Nasty’s first album, Can I Say?
Sit back and feel the power that words can have over us as Waverider Ruel shares a personal tale that will touch the soul.

My father's birthday party was an all-night food fest, karaoke jam, and poker game. Nothing fancy, but that's the way my dad likes it: simple and straightforward. We ate, we sang, and we played cards. The smile on his face throughout the evening told the entire story.

Late in the evening as I was helping myself to my third plate of food, I overheard my mom asking if it was too loud for my dad, with his grown boys boozily laughing it up at the poker table, aunts and uncles crooning off-key karaoke, and his granddaughter squealing with delight as she watched her Cinderella DVD for the second straight time.

“Of course not,” he said. “It’s the best kind of noise: family noise.”

Nearly 20 years earlier, the noise coming out of my bedroom was a mix of loud, non-stop heavy metal and punk rock. I became involved in the local crossover scene in which metalheads and punkers influenced each other's music, attitude, and dress. Metalheads were shedding the imagery of dragons and magic that was the foundation of heavy metal while punks added the musical chops of their metal compatriots to their fuck-the-world attitude. Metallica hadn't released the watered-down Black Album yet and Green Day was years away from being discovered by the mainstream.

Rainbows in the Dark were no longer mutually exclusive from Living in the City and I could appreciate the virtuosity of Yngwie Malmsteen while still getting my ass kicked by Black Flag. Cassettes littered my room: Megadeth, Slayer, Anthrax, Minor Threat, Crumbsuckers, English Dogs, Nuclear Assault, Fear, Descendants, and Dag Nasty.
Feeling alone and confused about post-high-school life, I took comfort in the words of Dag Nasty’s debut album “Can I Say.” I listened to Dave Smalley’s simple, direct lyrics and felt as if he had written my innermost thoughts and feelings and sang them over Brian Baker’s melodic, hardcore punk riffs.

My loneliness and confusion quickly became rebelliousness, which eventually came to a head as the nation celebrated another Independence Day. Going against the strict orders of my father, I took my brother with me and my friends, drinking and setting off fireworks at the beach.

Upon our late-night arrival, my father and I got into a shouting match that didn't seem to have an end. Of course, in my young eyes, my father didn't know shit and I certainly wasn’t sticking around to take any more of it. My mother cried her eyes out as I packed my things and began the move to a friend’s house a few cities away. 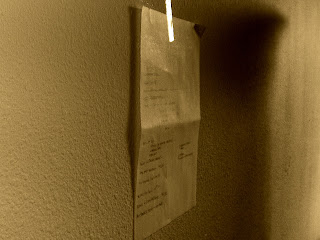 Besides the bed I would no longer be sleeping in, I left only one thing in my room: my handwritten copy of the lyrics to Dag Nasty’s “One to Two.” I taped the lyrics to my wall, piled the rest of my earthly possessions into the back seat of my Honda Civic, and drove away.

There are things I'd like to say
that I've said too many times before
things I should have done
instead of looking for a way to get out
you'll never know the sorrow I felt
or the hours I've laid awake
thinking about just what you said
how could you know how I felt?
I never took the time to figure it out
or see how the problems arose
I tried to blame the two of you
I can only blame myself
for the pain we felt
- “One to Two”

My mother was beside herself and called me at work every day. It was the first time anyone had left the relative safety of our home, but I didn’t need it anymore. I told her there was absolutely no way I was going to live under the same roof with that old man ever again.

Two weeks later, I moved back.

Living at my buddy's condo wasn’t the paradise I thought it’d be. His grandmother lived downstairs and his girlfriend often shared our room with us. I longed for the privacy of my own room; hell, my own bed would’ve been nice. Sleeping on a floor with cigarette ashes, spilled bong water, and empty malt liquor bottles wasn’t exactly how I was used to living.

The night that I returned home, I unpacked while listening to Can I Say, this time considering the album’s lyrics in a much different and more humbled manner. I was dreading the amount of flack that the old man would give me, since I’d come back to live under his roof, following his rules, tail neatly tucked between my legs.

My dad peered in as I continued my unpacking. I looked up at him.

The words hung in the air before I thanked him. He left without saying anything else as I finished putting my things away.

Almost 20 years later, I recalled my father’s words from that night as his birthday party wound down. I’ll remember that sentence for as long as I live: “It’s good to have you back.” Nothing fancy, just simple and straightforward: that’s my dad. It told me everything I needed to know about the man. No matter what, he would always be my father and I would always be his son.

Your writing, just like the music it's about, has a way of bringing me back to what's real and visceral. Thanks for sharing it. --Serena

Great reflection of that place time... I think many of us can relate. 18 year olds should take note.

Oh man, those were the days! Was that the same honda with a pillow tucked between your head and the window while driving back from Reseda? LOL! Love that ol man, and tell him I said that. I do intend to see you all I just have to do it. I miss mom too.