A Sunday Conversation with Oscape

Knocking our heads for a spin with his straight-out-of-the-desert brand of stoner/doom rock, Oscape made a big impression on the Ripple office when their first EP The Growing Ground fell into our laps. Needless to say, we couldn't wait til we had a chance to chat with Oscape's main man, Scott Heller, and dig deep into his fertile mind.

I have had a lot of musical epiphanies and still have a lot of them. My first concert was AC/DC. I was 12 yrs. old and I could not believe what I was seeing and hearing. The power and volume was that was running through my body was mesmerizing. I was addicted to that feeling from that time on. Years later, I was at the NAMM show in Ca. And sitting on a barstool in front of me, no more than 2 feet away was Dimebag Darrel. He was endorsing his guitar and just shredding away with ease. On top of that, he was cracking jokes the whole time and very down to earth. His unbelievable talent made me want to play more and more. Lastly, I saw an acoustic set of Springsteen. Just Bruce and his guitar. Clear, incredible, personal and inspiring

When I sit down with the notion of writing a new song, a lot of times nothing will come to me. When I am jamming with the guys with a free and open mind, the riffs and ideas will start coming and we will build off of those. A lot of times, riffs and ideas come to me when I am working or driving. If I really like it and it sticks for a while, I will call my answering machine and sing it on there, so I don’t forget it. It goes the same with the lyrics. If it doesn’t feel right for me, it usually gets dropped at the riff stage but once I have something I feel really good about, it will loop in my head over and over until I complete it.

Live shows give me tons of inspiration. The band Calexico play around Tucson quite a bit. When I see them jam, it makes me want to run home and play. Good performances really inspire me. I can be inspired out of depression or anger as well. The news, people’s interactions, people in power…all of it affects me and gets my brain in writing mode so that I can regurgitate my thoughts through music and lyrics.

Labels are kind of funny. Especially the rock genres. Space rock, stoner rock, ambient rock and on and on. I would say most musicians could classify their own music with a new label that they see it as. We ride a fine line between hard rock and heavy metal or so I have been told. I have also heard stoner rock, psychedelic, alternative, etc. I kind of leave it to the people that listen to us to label our music but if I had to I would say we are dark, angry,hard rock with a few psychedelic touches. We have some chunky rhythms but our vocals are not metal. I leave it to the ear of the beholder. 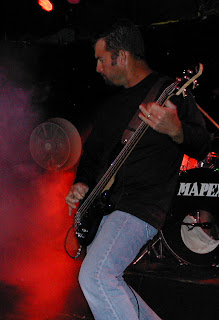 I just want people to give our music a chance and listen to it with an open ear. Whatever emotions our music evokes and however the lyrics and stories are interpreted are up to each individual. If our music actually brings out some sort of emotion or line of thinking, great, mission accomplished. Now, don’t get me wrong. If I knew that people were humming and whistling our songs and suddenly there was world peace because of Oscape, I could live with that.

I like jamming with the band to see what feels right. When we get a riff going and the drummer and bassist are tight, man, it can go anywhere. If it feels right, we expand upon that. At this stage, I really go for catchy hooks. If you can hum my song after listening to it just a few times, I am happy.

It is very tough and often, discouraging. Promoters can be quite unpredictable. We keep writing, playing and recording. When we put together a song that we are proud of, that is enough of a dangling carrot to keep us motivated. It helps tremendously that we love playing music, whether it is to others or just by ourselves. It also doesn’t hurt to get a little positive praise once in a while.

Let’s see….where do we start. There was one time, on stage, we were really getting into it. During the first song, I was headbanging a bit and smashed my face into the mic stand, chipping my tooth. I outdid myself a few songs later when I banged my head into my own guitar, putting a gash into my forehead. That was not stage blood. There was another time that we were playing inside during a huge rainstorm. Something happened to the roof and our drummer was soaked with rain. The rain was coming through that one space over his set. Reminded me of Charlie Brown’s black cloud. Lastly, there was the homeless lady who was flashing us the full frontal over and over again. Playing while dry heaving was quite challenging. And then this onetime, at band camp …….. 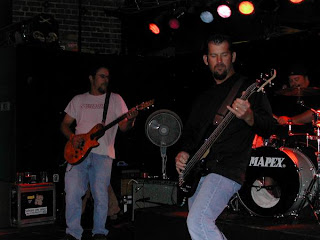 Where do you see you and your music going in ten years?

I would love to be playing music and supporting my family doing so while keeping true to myself. I have no desire to rehash someone else’s music. I want to play what I create. Now if I were able to tour the world, I could probably be okay with that as well.

My opinion of what makes up a great song is one that leaves me thinking about it or singing it long after I have listened to it. Great hooks, a good story and bringing something new to the table are what draw me in. If it evokes a strong emotion, that is a great start.

The first song I ever wrote was a fast, metal song called "Into The Void." It lasted quite a while and had little changes made to it throughout the years. I haven’t played it in a long time but I love revisiting old tapes and recordings. I actually get a lot of new ideas from old songs.

I am really proud of our new E.P., The Growing Ground. It has the attitude and emotion that I was looking for. I also feel it brings out something new and unique.

I think there are a lot of great songwriters out there spanning all genres. Personally, I like System of a Down, Tool, Alice in Chains, New Model Army, Springsteen, Hayden, Mike Patton, Michael Franti, Fiona Apple and on and on. I like those who create their own style, have catchy melodies, and tell good stories. However, I think Roger Waters and David Gilmour are some of the best songwriters of our time. Talk about unique and bringing something new to the table.

I have quite a few albums from the past and I loved them but I am a cd man now. I like the packaging of both of them, the covers, lyric sheets, the visual stimulation, etc. It all helps in relating to the artist that you are listening to.

Zia Record Exchange has a great selection, both used and new. A lot of hard to get stuff as well including picture discs, videos, etc. There was a bar that my wife and I used to go to right next to one of their locations. Sometimes, after throwing down a few, we would go shopping at the record store with impaired judgement. Credit cards, booze and a record shop don’t mix so well. We would come out of there with hundreds of dollars worth of music. Much of it we didn’t like or want. I never thought that I would buy a Brittany Fox cd. We are thankful that they buy used cds as well. Toxic Ranch is another store that caters to the more obscure and local music so if you are in town stop by and see what they got but I would definitely refrain from the cocktails beforehand.
Posted by The Ripple Effect at 12:53 AM