A Sunday Conversation with My Sleeping Karma 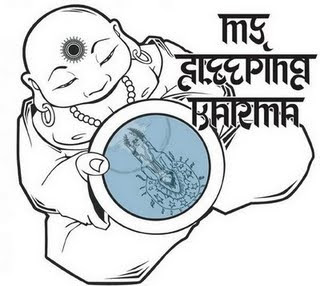 Swirly, spacey, transcendent, and altogether a near-spiritual experience. Yes, I'm describing the first time I ever heard My Sleeping Karma's brand of pyschedelic stoner rock. Mesmerizing is another word that leaps to mind. Naturally, we were thrilled when the guys stopped by the Ripple office to chat, light some incense, and become one with everything Ripple.


Well, we are four guys in the band and each one of us sure had his epiphanies when it comes to music. Funny thing is that we all grew up under the same influences. Back in the days, we put our ears mainly on metal and rock'n' roll bands like Maiden, Sabbath, Led Zeppelin, etc. Later, in the early 90s, we discovered a band called Kyuss that simply blew our minds off. 35007 was another great listening experience as well. Actually there are too many important bands out there to name them all. Our latest epiphany was probably the new Chris Cornell album. Quite revolutionary, in a disturbing way ;-)

Funny that you speak of lyrics :-) We usually start jammin' from a riff or bassline. When it feels good we are trying to shape things up and structured them. Details and melodies are added in the last sequence of the songwriting process. So it's pretty much like everyone of us is working out his own part of a song. Luckily, we all know how it should sound like which makes a lot of things easier.

Basically life. Nothing else that inspires you more with new ideas and people every day. Music as well, which sums up life in every particular. The ideas of Buddhism and Hinduism are important spiritual influences for us. It's like a place to sooth your soul. Last but not least our families and friends of course. 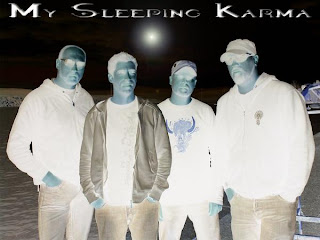 My Sleeping Karma combines aspects of chill and rock. It's psychedelic, organic music with a major focus on the groove and the melodies. Emotional, stirring, sedative and melancholic - the shape of aphasian landscapes in your ears.

That is pretty much leading to the previous question. We'd like to give our audience a spiritual time using the devices we just specified before. Everyone should draw his own conclusion and find the spiritual message for himself in our music. That is all we intent to do and what is making us happy.

When your focus is mainly on instrumental music, you have to work out things differently as if you are using vocals. Structures and time changes for example are much more important. Of course you start with the basic idea, as we mentioned before, a riff, a bassline or a melody. Simplicity or complexity doesn't really matter in this context as long as it conduces to the music. To "karmarize" a song, we are playing a lot with dynamic devices to lead a song to a climax or to let it calm down again.

We don't really recognize something like the brutal side of the business. All of us Karma guys are 30+ of age and therefore we don't feel like being the next big thing. Due to the technological possibilities we are in a position to record and produce our very own music without any compromises. Apart from that, the whole stoner and psychedelic rock scene, which is quiet important for us, is still very familial. We've met so many good supporters of the years and that made a lot of things much more easy. These people and the fans that come to our shows are motivation enough to ride on. 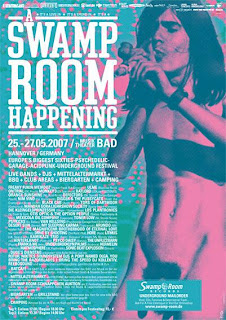 Come on, share with us one of your great, Spinal Tap, rock and roll moments?

We played at Swamp Room Mania in munich last september, a festival organized by Stefan Koglek of Colour Haze. We had a great time and got wasted after our gig. Suddenly two of us started to sing Manowar songs and we all sang along. It ended up on My Sleeping Karma performing "The Warrior's Prayer" (spoken word tale from the album Kings Of Metal) when Stefan entered the backstage room. He got highly irritated and the expression on his face was priceless! :-)


Your music is deeply spiritually based, rooted in Buddhism. How did this come about?

When you reach a certain age, you start reflecting your life and there are basic ideas in Buddhism that we feel very comfortable with. The spirituality and the way to comprehend life are fascinating. Though far from being real Buddhists, we are trying to follow that path.

That can be summed up to one expression: Emotion. If it's in the melody, the sound, the lyrics or whatever - everyone has to find out for himself.

The first song we ever wrote was probably "Hymn72." It was originated when Seppi (guitar) and Matte (bass) started jammin' before we came together as a band. It was an uptempo song, but it obviously showed up the direction we wanted to go. When we started with My Sleeping Karma we discussed what to do with the song and everyone adds his ideas to it. The song title leads to Seppi's year of birth. That's the pretty unspectacular story of "Hymn72" ;-) 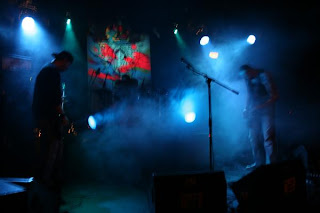 You mean like a certain song? That's a tough question, because everyone of us probably has another favourite. We are especially proud of our second album Satya. We had more time to optimize the sound and melodies and feel like it is perfect to represent what My Sleeping Karma is all about.

Wow, there are a lot of really great bands out there. When you look at MySpace you feel like if the world consists of tons of good musicians only. Anyway, it's always the bands that start something of their own, adding new ideas to stamped out trails. There is this band from the united states with roots in England and iran - *shels. Those guys really impressed us by combining the brutal aspects of Isis with melancholic landscapes of the likes of Sigur Ros. Yet they pretty much have their own sound. *shels will release a new album soon and we can't wait for it. Check them out if you haven't!

Vinyl, because of the warm sound and the artwork. CD's and MP3's changed the whole industry, made it more easy for the regular fan to deal with music. But there is nothing like holding a vinyl in your hands. It has more of that artist aspect. It's like the difference between book and ebook. By the way, both of our albums are going to be released on vinyl this month.

At the Ripple, we travel a lot. When we come visit you, what's the best record store in your town?

That would be Echobeat, located in the center of our hometown Aschaffenburg.
Posted by The Ripple Effect at 12:53 AM