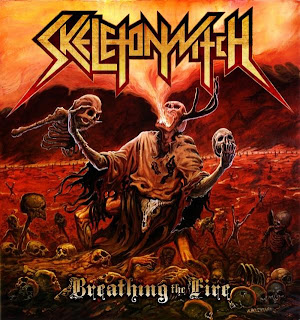 I often find myself in a place of reverie, contemplating what my life would be like without heavy metal. From the time that I first heard the distorted notes of “Detroit Rock City” at the tender age of six, to the more poppy, yet still fairly aggressive riffs of Def Leppard’s Pyromania, to the ultimate epiphany of Metallica’s Ride the Lightening or Slayer’s Haunting the Chapel, the music has always been that something special that I’ve been able to rely on. My metal never let me down. It was always there when I needed it the most. Even recently with my discovery of such oppressively dark and extreme metal as Opeth, Katatonia, or Byzantine, I’ve found myself turning to it for, oddly enough, comfort. There’s just something about the distorted and detuned notes blasting from a stack of Marshall or Mesa Boogie amps. It gets me right in the soul when I hear the double bass drums hammering away while the low end drone of the bass guitars coat the music in a sheet of warmth. And then, the usual apocalyptic and doom laden lyrics screeched away by vocals that have more in common with stone grinders than a choir of angels, well . . . that’s the stuff that makes me forget about my real world problems. For those brief moments in time, those few minutes of aggressive splendor unleashed upon my aural senses, I realize that there is no other music that has as much power over me as does heavy metal.
Upon my desk rests the new album from Skeletonwitch, a band that was introduced to me a little over a year ago and who blew me away with their proficient playing and aggressive energy. Beyond the Permafrost was a solid album and one that has made its way into my player on many occasions when I needed to release some steam. Where Permafrost was a strong and solid album, this new disc, Breathing the Fire is a fucking throw down with bear sized men wielding blunt instruments of destruction in a dark alley on a cold and rainy night. Breathing the Fire is that perfect blend of thrash metal mixed with NWOBHM twin guitar harmonies mashed up with the blackest forms of extreme metal. When I first heard Haunting the Chapel, I thought, “My God. What is this dark and evil sound that pierces the sheer fabric of my reality?” and the moment I heard this opening burst of metal delivered by Skeletonwitch, I was taken back to my first youthful experience with the dark side. 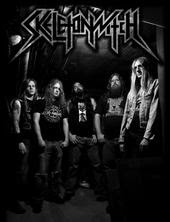 There’s no epic build up or creepy instrumental intro to this album. “Submit to the Suffering” blasts out of the speakers without warning, double bass drums pounding away, guitars providing a distorted flurry of notes, all coming at high octane speed. It only takes a few seconds to recognize that Skeletonwitch have one thing in mind and that’s leveling any obstacle in their path. This song is comprised of one great riff after another. Once the vocals engage in the melee, listen to the guitar licks. That’s just a cool fucking riff! And I love how these guys change things up within a piece of music. Quick starts and stops give the songs room to move, and then there are the massive shifts of tempo and emotion as seen at the midpoint of “Submit the Suffering.” That’s the kind of break that snaps necks! Gotta’ love the vocal change as vocalist Chance Garnett goes from the higher pitch, screeching vocals to the deep down, guttural vomitous vocal style. This song makes me want to throw something heavy at someone light.
“Where the Light Has Failed” is made up of another fantastic riff that gallops along with a high speed rhythm. The thing that comes to mind while listening to this track is that this band has come together as musicians since Beyond the Permafrost. The musical growth is phenomenal! The composition to this track is complex, especially as it weaves from the main body of the song across the bridge and into a technically snazzy break. Then, rather than continue pummeling us with massive amounts of notes, the guitars begin to sustain a bit more and a fairly melodic guitar solo creeps out of the darkness. One doesn’t usually associate the word classy with music of such extremes, but I’m far from usual and classy is the word that I like for this particular condition. Y’all know how I love dynamics in my metal, and at a mere two minutes and seventeen seconds in length, I’m further impressed with the bands capability to add so much music in such a short amount of time. It’s almost like when one sees a painting close up and there are all of the vibrant colors and textural details, images all swirled upon one another, and then . . . a couple steps are taken away from the painting and it becomes apparent that the initial work of art is merely a small portion making up a greater detailed masterpiece. Skeletonwitch have incorporated detailed pieces of music in condensed spaces of time, but in listening to the whole thing, it becomes this elaborate and complex sonic being. Truly amazing work!

Skeletonwitch reach into a deep bag of old school thrash for inspiration, but what I dig about these guys is that they don’t go full on retro with the sound. They utilize enough elements of modern metal to make it sound relevant for today while mixing in great moments of thrash energy and technical proficiency. As mentioned, the musicianship of this band has definitely grown, particularly in the approach of guitarists Nate Garnett and Scott Hedrick. But let’s not overlook the immense talents of the rhythm section of drummer Derrick Nau and bassist Evan Linger. “Release From the Catacombs” highlights the rhythm section like none other. Nau’s blastbeats open the songs and he then propels the song with a healthy dose of double bass drum work and outstanding fills, and Linger’s contribution to the song will become that of legend in due time. He’s running his fingers all over the neck of his bass like he’s massaging the knots out of a boulder. Man . . . it’s a beautiful, virtuosic performance without being noodle-y. I want to go out and break my finger as punishment, for they fail me and deserve worse.
I could go on for days about the details of Breathing the Fire and I fear that no matter how much I praise this album, my words will not be doing enough of a service. Maybe it’s the fact that I need the full on aggressive metal in my life right now. Maybe it’s the state of the world affairs that makes me turn to the comforting sounds of destruction. Maybe it’s all the hype about the inevitable end of the world in 2012 that has me looking at today’s modern metal like it’s a survivor’s guide for the apocalypse. I don’t have the answers. But I do know that I love heavy metal and when it’s played with as much intensity, integrity, and fuck all tenacity as Skeletonwitch have displayed on this new disc, then I know that all is once again right in the world. Dig deep into this one, Waveriders. Breathing the Fire has layers to it with high level technical complexity, all the way to primal savagery, and the more you listen to it, the more detailed the music becomes. And the more detailed that the music becomes, the more and more you’ll become fascinated with the swirling patterns of notes as they bounce around your soul.
One last item of note. The label, Prosthetic Records, is taking pre-orders for the album in separate orange and white vinyl editions. I’m thinking I’m going for the orange. Of course, there’s always the black . . . decisions . . . decisions . . . - Pope JTE

Nice one, Pope. Skeletonwitch is one of the best metal bands around right now. Saw these guys last summer and they blew me away. Real metal in standard tuning!

I wandered into a metal tent and saw these bearded behemoths when I was at SXSW this past march...needless to say my goose was cooked. I loved 'em, and if I'd had a denim jacket on, I would have ripped the sleeves off.

Woody - I couldn't agree more. The first time I heard them, I thought they hada refreshing sound even though they wore their influences clearly draped on their sleeves. Such a novel idea . . . playing instruments in standard tuning!

Seano - I love it! I want to go out and buy a denim jacket so I tear off the sleeves! I just missed them as they ploughed through San Diego and regret it just a little (okay a lot)

By the by - the orange vinyl disc showed up on my doorstep yesterday and it's rattling away as I type. Honestly, the album sound better in this format and I highly recommend y'all pick up a wax copy!

These guys were apart of a lineup of like six metal bands I saw a few weeks ago. I don't know, maybe I'm getting older, but this just didn't do it for me. Everything is blending into one loud anonymous sound.