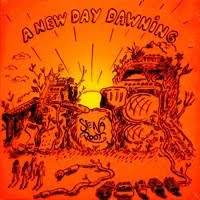 The act of distillation is to extract the essence of something, condensing it down to its most pure state. When referring to whiskey, the distillation is done in a big pot and Scotch whiskey is distilled twice, producing an end result that is pure and smooth. The Irish go for three runs of distillation, creating something that achieves perfection.

When referring to riff-massive, huge '70's rock, the distillation is done by a band called Siena Root, and the end result is some of the smoothest, truest, pure groove '70's rock you can imagine.

A New Day Dawning is Siena Root's debut album from 2004, lovingly reissued by Rockadrome Records, and I'm going to dispel any suspense about this disc right away: this album will definitely be on my year end list for best release fo 2009. Yeah, I know, technically, it was originally releases in 2004. I don't care. Without a doubt, this is one of my favorite albums I've heard all year and one every fan of big-groove retro-classic rock should own. 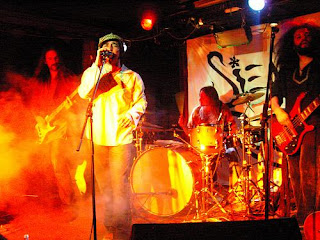 Siena Root is a triple-distilled essence of huge 70's rock, passing Blind Faith, Cream, Deep Purple MKII, and a touch of the Allman Brothers through the distillation chambers, then combining the purest, most essential elements of those bands into one glorious concoction. And this mixing isn't done haphazardly, bringing in some expert musicianship, tasty wah'ed guitar solos, massive crunchy riffs, flaming hammond organ runs and vocals that more than remind me of the soulfullness of a peak-era Steve Winwood. We have a master's hand at work here, gently mixing, combining the elements. Each song is familiar in all the right ways, yet totally new and fresh, totally Siena Root. It is everything you've ever loved about classic rock, distilled down to it's most essential essence and served up for you in a shimmering crytal glass. Smooth and pure and perfect.

"Coming Home," starts us off right out of the distillers still, immediately revealing all the tastes and textural pleasure that awaits us. Following a stuttering, accelerating drum intro, the mother of all '70's riffs is unleashed, massive guitar sound and bass plowing through the hammond organ washes. Oh, my God! Is that good! Just about as perfect and driving a riff as I've heard in eons. I defy you not to feel that groove, let it invade you, guide you, move you. Then, just as suddenly, the riff mutates and drops out, revealing the golden-throated vocals of Oskar Lundstrum. Like Winwood presiding over Blind Faith, his tone is stunning, his heartfelt soulfullness real. Listen as a stunning Clapton-esque guitar solo wails through the verse break. Marvel as the song works it's way back to that all essential groove. Cream is here. Blind Faith is here. And they work together perfectly. I'm gushing, I know, but fuck it. Prop me up in a corner and call me a school girl, this song moves me in all the ways classic rock is supposed to. And I'm still grooving. 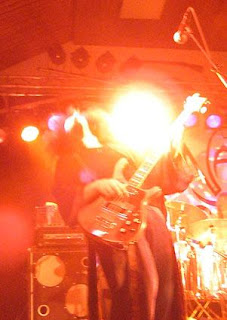 "Just Another Day," bursts out next providing the perfect 1-2 punch to start the album. Blind Faith is still here but now it's brewed with serious dobs of classic MK II Deep Purple. Huge organ runs, searing guitar parts, impassioned vocals. Listen through the chorus, as the high-toned ghosting harmony vocal and the lead guitar mirror the lead vocals. Damn, that's good. So much emotion is revealed in that tiny passage, so much honesty. Young bands could study this song for years, discerning craft and intention. Big looping, Purple riffs drive the song forward to a gorgeously toned solo. Bass and drums never miss a step. This song rides, it grooves, it simply rocks with a triple-distilled perfection.

"Shine," another album standout keeps the Purple-vibe going strong, through a ballsy, blues-adled riff that picks up in intensity of the Allman Brothers as the song progresses. Again, you can't beat the southern soul in the vocals, adding that perfect pairing of honesty to the rock. This bluesy feeling is taken to a whole 'nother level with "Fever," a mid-temp pure out blues smoldering burner. A hint of Traffic peeks in through the middle-section keyboard solo, tripping over a slow and steady, bass-heavy groove. Then the guitar comes searing back, wailing like a man crying at at funeral. Beautiful, simply beautiful.

Then, lest you think the album is becoming a downer, "Above the Trees," rocks and grooves with a swaggering southern sidestep. Drums pound like an oncoming stampede while the band veers off into a gentle, swirling psychedelic excursion. Nothing too trippy here. Nothing inaccessible, just nice Cream-ified jamming. 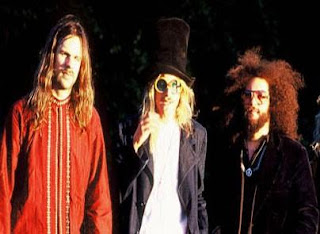 I'm not going to dissect each track, but I'd be failing all waveriders if I didn't at least toss a mention to another one of the standout tracks on an album full of standouts. With it's huge keyboard-laden sound, and impeccably tight start-stop riffing, "Little Man," is one intensely groovy blast of '70's hazy smoke-obscurred sunshine. Like an onrush of Purple or maybe a touch of some of the finer Uriah Heap, it's another case where the end result is much greater than the sum of its parts.

I've listen to this disc non-stop at least eight times and I don't see myself stopping any time soon. Like the band's the boys used as building blocks for their music, their sound is timeless and classic. It's an album that only a hyped-up Ritalin-fixated, ADD child with the attention span of a gnat could get tired of. But if you're the type who like to dig into an album, I mean really dig into an album, with knife and fork at the ready, set to feast on all the flavors and textures laid out before you, A New Day Dawning will hold a reverred place in your collection.

Wow! This rocks! The Deep Purple and Uriah Heep comparisons are dead on. They also remind me of the first album by Lucifer's Friend. Nice one, Racer.

Thank you so much for taking the time to post this album! Gonna see them live in greece in a month :D