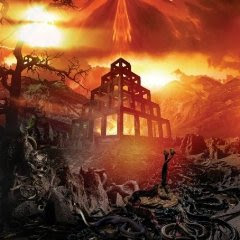 When it was announced at the start of this year that Scott Kelly of Neurosis, Al Cisneros of OM, Dale Crover of the Melvins and doom hero Scott Wino Weinrich were recording an album together, people started freaking out. These are four of the most revered players in the underground stoner/doom/metal/whatever-you-want-to-call-it scene for the past 20 years. Anticipation and expectations have been running high all year, which makes Shrinebuilder the Blind Faith of modern times.

The self titled album has finally arrived. Was it worth the wait and the hype? For the most part, yes. Whenever you get four leaders in a band there’s always potential for trouble. Either egos get out of control and the thing falls apart or everyone is too cautious to step on each others toes. Sounds like these guys worked pretty well together. I guess there wasn’t enough time for arguing, since they rehearsed only once before going into the studio for a weekend. Unsurprisingly, the songs are all pretty long ones – 5 of them in about 40 minutes. Compared to some OM and Neurosis albums, that’s pretty brief.

“Solar Benediction” starts off with a familiar Dale Crover drum fill before the riff comes in and Wino’s familiar voice fills the speakers. He trades lines with Scott Kelly and their voices together sound like a doom metal version of Sam & Dave. It starts off pretty uptempo before slowing down into a very Neurosis sounding middle part. 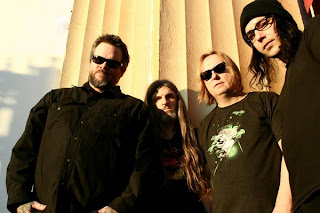 “Pyramid Of The Moon” bears the stamp of Al Cisneros. It’s a long, droney song that sounds like if OM had a guitar player. He sings this one on his own without any help from the rest of the band. “Blind For All To See” also has an OM feel, starting off with a jazzy bassline and with creepy vocals from Scott Kelly. About halfway through it gets much heavier with some trippy Frippertronics style guitar.

The shortest song on the album, “The Architect” clocks in at a mere 6 minutes and sounds like it could have been on Wino’s solo album Punctuated Equilibrium from earlier this year. Wino’s love of the Mahavishnu Orchestra is clear on the album closer “Science Of Anger.” A terse, repetitive riff with Wino and Scott trading vocals and all sorts of processed guitar fills. Towards the end it changes shape into a heavy half time jam with some great dueling lead guitars.

Overall the album is very strong. At times it sounds like some of the songs were patched together. It’s not surprising how little time the members played together before recording. They’re getting ready to do some shows in the US in the middle of November. I would imagine that by the time they hit the stage the songs will be even better. And much louder, of course!

http://www.myspace.com/shrinebuildergroup
Posted by The Ripple Effect at 12:45 AM