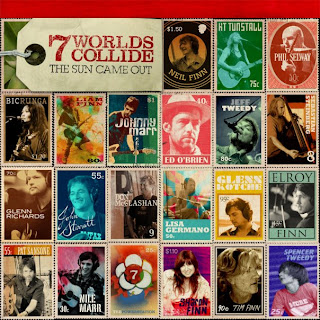 Now, I don't know if I'd call myself a Finn brothers groupie or not, but I'll tell you, ever since the day that I first heard "Poor Boy," off of the Split Enz True Colours album, I've picked up just about everything that Neil or Tim, or Neil and Tim, have ever done. And truth be told, rarely have the Finn brothers let me down. With an uncanny knack for a melody, and golden-soaked voices, the New Zealand brothers really know their way around a pop song.

Imagine my delight when I found out that Neil got together with a whole host of fellow music artists and put out a dazzling 2-CD set of new, original tunes, and the whole thing was done in the name of Oxfam America, an international relief organization. Yep, my mouth started to water like a Finn . . . er . . . Pavlov dog. And when I say music celebs, I don't mean just anybody. Joining Neil on this venture, besides his brother Tim, are the likes of Johnny Marr, Jeff Tweedy, Kt Tunstall, Members of Radiohead, Bic Runga, and more. Then, just to add to my embarrassment of Finn riches, it looks like Neil went ahead and recruited more Finn family members to join the party, like Sharon, Liam, and Elroy. Yep, we got two generations of Finn's on board. And to go along with the family fun, we also have two generations of Marr's and Tweedy's as well. 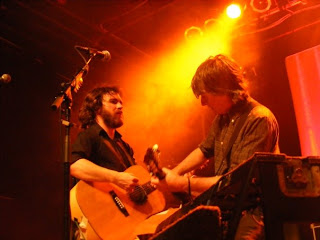 All that's good and well, but we don't buy albums just for the line-up, and truth be told, I've been burned many a time by an all-star charity affair that turned out to be a humdrum, snooze-fest, featuring phoned-in performances and songs that nobody else wanted.

Let me stress that as clearly as I can. The love and joy the Finn and Friends crew bring to this project is absolutely contagious. Each song is a winner, a delicate masterpiece of carefully, created, immaculately performed pop. I'd like to say that the album gets better and better as it goes along, but that would imply that the first songs aren't good, which is definitely not the case. In fact, while the KT Tunstall/Neil Finn penned "Hazel Black," has been selected as the first single from the album The Sun Came Out, it certainly isn't the only good song on the album or even the best. Check out the dynamite Johnny Marr sung opener "Too Blue," with its swirling, merry-go-round melody, or the sweet confection that is the Jeff Tweedy sung "You Never Know." Neil and Sharon Finn toss in a delectable treat of pop perfection with "Little By Little," only to follow that up with haunting empheralness of Neil and Liam Finn's "Learn to Crawl." 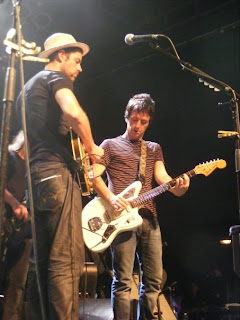 KT Tunstall and Bic Runga match their gorgeous vocals for some stunning harmonies throughout the mermerizing "Black Silk Ribbon," before Johnny Marr launches us down the simple perfection of the psychedelic-vibed "Run in the Dust."

And that's just about halfway through the first disc of a two disc deal. No matter who takes lead vocal, who wrote the song, or who contributes on each track, this massively talented group of musicians make the whole affair sound completely natural and incredibly warm. There's no mishmash of ideas here. The album doesn't sound disjointed or rushed together. It's just an organic outpouring of incredibly strong song-writing craft and performance.

Great post! Always good to hear what Johnny Marr is collaborating on. And like you I've always been a fan of the Finns' songwriting.

I caught Neil & Co at the Largo a few months ago...what an amazing songwriter! This album really does rise above the usual charity project. Great post!