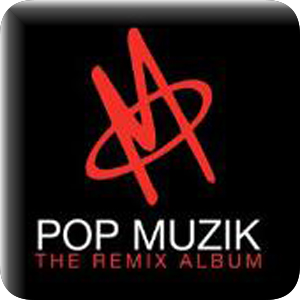 Well now, Union Square Music announces a 30th anniversary compilation celebrating a classic new wave anthem. Pop Muzik - The Remix Album compiles original versions, demos, and remixes, like Perfecto's Steve Osbourne mix, one of several commissioned by U2 (all of which are featured on this album) as the opening anthem of their Pop Mart tour. Other tracks come from dance artists including Junior Vasquez and Dub Pistols, brand new work from new wave pioneers Devo, and even a Cuban/salsa cover version by Rhumba Calzada.

And let me tell you, you haven't lived until you've heard "Pop Muzik" redone by Devo. Brilliant! You also have to hear the original demo of "Pop Muzik," which sounds nothing like the version we've all come to know and love.

"Pop Muzik" hit #1 in the US in 1979 and, in the UK, hit #2 as Art Garfunkel's "Bright Eyes" was at #1, signaling the end of the easy listening, MOR- saturated 1970s and ushering in the electro, new wave 1980s whose influence is all over the current pop charts. "Pop Muzik's" influence is everywhere... The first rap hit in the UK, it's been featured in Priscilla Queen of the Desert, covered by hip-hop acts like Tricky and even been honored with versions in LEGO and The Sims.