Ripple News: Byzantine to Return On-Stage for 3 Shows in 2010 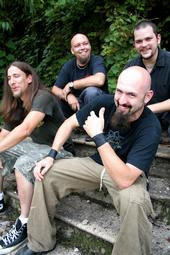 While perusing the pages on MySpace, the name of Byzantine caught my eye, and being the monumental fans that we are at The Ripple Effect about this band, I figured this might be worth checking out. Sure enough, after reading the blog from the bands page, there was a mixture of excitement and disappointment from the following announcement. So, go ahead . . . read the following.

Following their hiatus that has lasted for over 2 years, the members of WV thrash metal band Byzantine, have begun plans for a weekend of reunion shows.

Shortly following the January 2008 release of “Oblivion Beckons”, the foursome announced that they were disbanding. This announcement came as an unpleasant surprise to their fans, particularly due to the fact that they would not be touring at all in support of their newest album.

Vocalist/Rhythm Guitar Chris "OJ" Ojeda had this to say about their upcoming reunion:
"2 and 1/2 years ago we put a sudden and abrupt halt to our musical careers under the name Byzantine. It was a really anti-climactic way to go out. We know a lot of fans and friends alike felt cheated that we didn't play any shows supporting our last album, "Oblivion Beckons". Now, we all feel like it's time to give a little something back, all guns blazing. Unfortunately, we are unable to tour since we live scattered across 3 states, have children and full time jobs, but we want to give our local fans something to remember us by."

Tickets are not currently available through the band or its website, but please stay tuned for updates regarding advanced ticket sales. The schedule is as follows:

Okay. Now that y’all went ahead and read the announcement of upcoming Byzantine shows, I just want to explain the inner conflict within the Ripple offices. We’re thrilled to death that the band is hitting the stage to tackle the incredible pieces of sound that are featured from Oblivion Beckons, and the previous two releases, but we’re saddened because that will be it for the foreseeable future. Waveriders on the East Coast . . . we need y’all to go to these shows so that we can live vicariously through you, and hopefully, a strong fan showing will convince Byzantine to make the coast to coast trek at least one more time so that the West Coast fan base can revel in the glory of one of Heavy Metal’s finest offerings.

That’s all. You may now go back to your regularly scheduled minutia of the day.


http://www.myspace.com/byzantine
Posted by The Ripple Effect at 12:02 AM