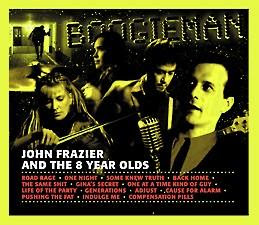 Generally, I tend to like weird. By weird, I simply mean something that’s different than the status quo or something with a unique twist on the usual. That’s what weird is, right? Outlandish and bizarre is a whole separate category and I can get into that in later reviews. But for now, let’s discuss John Frazier and the 8 Year Olds. This band, for all intents and purposes, is weird . . . weird in that they approach their craft from a different place than you or I might do. Part rockabilly, part punk rock, part I don’t know what, Frazier leads his band of merry melody makers through fourteen tracks of exciting and instantly memorable music, fourteen tracks of music that will make you tap your toes and crack a smile. . . maybe even a chuckle a little. Boogieman is not only worth your time, but worth your hard earned dollars and cents.

Part of what makes Boogieman so compelling is that, on top of its inherent weirdness, it’s musically complex and thought provoking. Listen to the opening song, “Road Rage,” and hear how the distorted guitars play loose and wild over the bass line. Then you have the vocals, which come across more as a narrative than singing, before the haunting strains of a violin pierce the musical atmosphere. Ultimately, it’s the riff that kicks in around the 1:00 mark that makes me stop and nod my head in approval. The violins weave around the melody and lift the rest of the instruments above being cliché, almost giving the song a prog-rock vibe, and sounding almost schizophrenic in comparison to the opening of the song. By the time we get to the second verse, John Frazier’s vocals elevate from the more narrative and monotone approach to capture a bit a manic adventure and emotion. I can’t get enough of this song. The energy, the musicality, the raw emotion to the whole tune makes me reach to my music player of choice and hit replay. Damn awesome song! 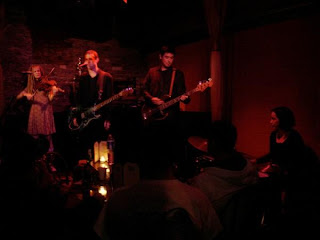 Then, Frazier and company lead us in a completely different direction. “One Night” sounds like a combination of Roy Orbison and Cake. Clean guitar tones strum out the verse and Frazier’s voice has that haunting Orbison tone of loneliness and inner torture. Check out the guitar work throughout this track. The subtle strumming at the beginning, the virtuosic hammer-on’s, and then the way Frazier drives the pick through the strings. This song is a credit to the recording as much as it is the playing. The notes vibrate and shimmer across the musical landscape. On top of all of the musical intrigue, the lyrics are cool and instantly memorable due to the highly infectious melody. “One Night” is an interesting contrast to the next song, “Some Knew Truth’” which is a straight up, high energy, hard rockin’, quasi-punk-y piece. Filled with great guitar tones (I’m hearing an acoustic strumming in the background) and a locomotive beat, “Some Knew Truth” makes it three songs in a row that gets me right in solar plexus.
“Back Home” features that narrative-type vocal performance from Frazier once again, and damn it! I love the non-chalance of his vocal approach! The composition and arrangement of this song is so damn cool . . . violins are littered throughout the track, various guitar tones are employed to gain maximum affect, the rhythm section keeps the whole thing together through the odd breaks and time changes. And then, finger picked notes of an acoustic guitar of “The Same Shit” meander from the speakers. Accompanied by the strained notes of the violins, this song picks up tones of some bizarre alt-country vibe, but then, as seems to be the M.O. for John Frazier, the song goes in a different direction. The lyrics tell a great tale of a friend, who’s gender is cleverly masked apparently is really no real friend at all. The phrasing kills me! At the end of the second verse, after Frazier has recited the incredible journeys of said acquaintance across the U.S., he simply states, “I don’t believe it,” in such a tone that I can’t help but crack a smile and giggle a little. It’s perfect! So many times I’ve heard that same voice in my head after hearing the farflung tales of “friends!” Is John Frazier the voice of my own inner monologue? I can get behind that. 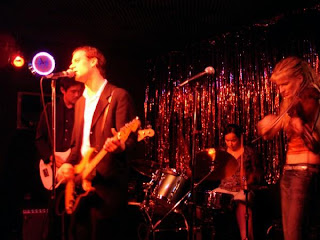 The band changes things up for “Life of the Party” as the female vocals of violinist Pinky Weitzman takes the lead role. The tune is more somber sounding as the vocals are of the more narrative style and almost sound like the singer is bored. But, that’s the great thing about this particular performance! It’s hard to tell if the narrator of this tale is being sarcastic about being the life of the party or simply is that tired of being that person. Again, it’s a cool song for no other reason that it makes one stop and question the singers intentions, and if music has the ability to make me care that much as to why this person is unhappy or bored or apathetic about their position at a social gathering, then the song has power.
Finally, for an upbeat, groovin’ tune, John Frazier delivers “Pushing the Fat.” I’ve listened to this song about a hundred times now and I still don’t have a clear understanding as to what the phrase “pushing the fat” really means, but one thing is clear. This song has movement. It’s got bounce. It pushes the fat. Driven by a great bass line and accented by Weitzman’s violin work, Frazier delivers a funky fresh tune that can only be about sex. This one hits on a primal level. The level that gets the bones clickity-clacking, the abdomen gyrating in one direction or another, y’know . . . it’s accessible enough to dance to, but dangerous enough that you wouldn’t want to bring it home to mother.
Boogieman is as addictive a listen as I’ve had all year. Even as I’ve had other discs lined up and ready for review, Boogieman has found its way back into my player for additional spins just for the fun of it. I’m certain that I wasn’t expecting to like this album as much as I do, but that’s the funny thing about expectations. They’re meant to be surpassed. John Frazier and the 8 Year Olds have become my new go-to band to eradicate the doldrums of the day. Instantly catchy songs packed with an odd melodic sensibility, fun lyrics, upbeat and powerful music and instrumentation . . . the album has everything that I need to complete a good road trip or a simply jaunt to the corner market. Love ‘em, love ‘em, love ‘em! - Pope JTE
www.myspace.com/johnfrazierandthe8yearolds
www.john-frazier.com
Posted by The Ripple Effect at 12:25 AM