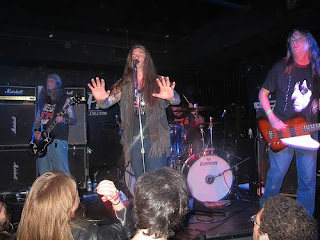 It had been over 15 years since Saint Vitus toured the east coast and since breaking up in 1996 their popularity had grown considerably. They did some reunion shows in 2003 that left everyone wanting more, and they finally played again earlier this year in Europe. The warm up show they did in New Orleans was the first time Saint Vitus ever sold out a club in America and featured members of Down bum rushing the stage to sing along on their favorite jams. This show in Brooklyn was one of only 3 (the others were Worcester, MA and Baltimore, MD) but word has it there will be west coast dates in early 2010.

It’s been interesting watching the cult of Saint Vitus grow over the years. When they first appeared on the metal scene in the mid-80’s most people didn’t know what to make of them. Thrash metal and hair metal were both at their peak and neither crowd wanted anything to do with Saint Vitus. Most metal fans didn’t know what to make of four long hairs from California that looked like they all failed a Cliff Burton look alike contest. People tolerated Cliff’s bell bottoms because he was in Metallica, but Saint Vitus’ biker image and super slow Sabbath grooves were basically laughed at. Growing up as a Sabbath youth, when I first read about Vitus in Kick Ass magazine I knew they were right up my alley. I was lucky enough to see them open for Black Flag at Irving Plaza in June 1985 the day after I graduated high school. They completely blew me away. Their second album Hallow’s Victim had just been released and original singer Scott Reagers was still in the band. They were so slow and heavy playing in front of a fairly hostile punk rock audience but they managed to win a few people over. Most people were too stunned to do anything and saved their energy to ridicule Black Flag for having long hair. 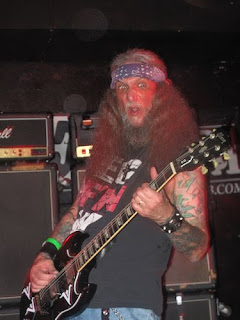 So almost 25 years later I finally got to see Saint Vitus again and I’m happy to report that they’re even better now than they were back then. I was extra excited because I hadn’t seen them with the mighty Scott “Wino” Weinrich. Wino’s voice is as powerful as ever and he’s got an intense stage presence – intimidating and welcoming at the same time. Standing next to him on guitar is the completely insane Dave Chandler on guitar. I had seen his band Debris Inc a few years ago at South By Southwest in Austin and had forgotten what a nut he is. He’s been wearing the same bandana since the dawn of time with his huge ‘fro puffing out. While Wino’s singing, Dave is behind him singing along like a demented Steve Harris. Reliable Mark Adams is still on bass but Henry Vasquez has replaced original drummer Armando Acosta.

The place went nuts when they opened up with “Living Backwards,” from their classic fifth album V. Europa’s sound system can sometimes be problematic, but the sound was loud and clear. Everyone onstage and in the crowd had huge smiles on their faces. A few songs into the set, Dave paid tribute to the recently deceased Dickie Peterson of Blue Cheer and dedicated “Clear Windowpane” to him. It was a fitting tribute since Blue Cheer was a brand of LSD back in the 1960’s. The entire show was great but “The Troll” was a real highlight. On record the song moves at a snails pace, but live it was even slower and heavier. When they broke into “White Stallions,” an uptempo song from Hallow’s Victim, a mosh pit erupted. 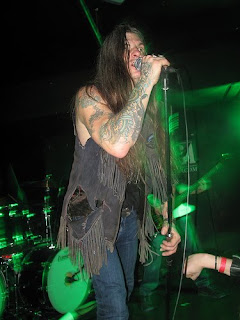 The band didn’t bother leaving the stage for their encores. The backstage area is on the other side of the club so there was no point walking through the crowd just to come back a minute later. “Dying Inside” was the first encore and featured Dave’s bizarre left handed fretting technique. Their theme song “Saint Vitus” had everyone singing along and “Born Too Late” ended the night. All the guys in the band hung out in the crowd talking to fans and signing autographs. Their down to earth attitude is one of the reasons why people respect this band so much.

I got to the club a little late and missed the first 2 opening bands Orphan and Bassoon, but walked in during the first song by Saviours. They were great. Very reminiscent of High on Fire but with a strong Iron Maiden influence. They played a lot of songs from their upcoming album Accelerated Living, which is due out any day. They also get bonus points for their bass players awesome Mountain shirt.

Thanks to Jack Crank of nogodsnovegetables.com for the use of his photos.

I loved St Vitus back then and it seemed maybe one other person I know liked them. Most people, even people who liked some rather extreme stuff, just couldn't deal with the heaviness, I guess.
November 5, 2009 at 6:19 AM