Through the technological wonder and infinite time-sink that is Facebook, I’ve had the fun of reconnecting with gobs of old friends from college, high school, heck, even grade school; and part of that fun is seeing how many of my friends still maintain their youthful passion for music, no matter what kind. Jeff is off and running to see King Khan in the City, Diana is posting early morning videos of Alan Parsons, Dave has a Kiwi-American hybrid playlist. It’s all good. More recently, I’d learned that an old middle-school friend and I developed into musical soul mates, both deriving an insane amount of musical orgasmatronation from the dark and deadly post punk movement of the early 80’s.

And to satisfy that urge, Steve, have I got one for you.

A while back, I described the latest single from The Estranged, a trio of former Remains of the Day, Hellshock, From Ashes Rise and Warcry members, as "a two-song blast of agitated post-punk. Brimming with energy and dynamics, mean, aggressive, discordant and utterly captivating." I noted that "comparisons to Joy Division, Mission of Burma, and The Wipers will flow over these guys like rain from the critics, but I also hear some of the best of the rockier side of post-punk, like New Model Army, T.S.O.L. and even the Gang of Four." 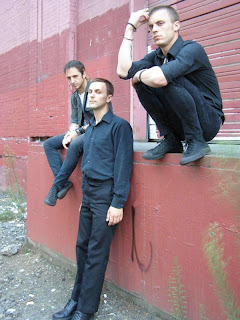 Naturally, being a freak for the band, I did everything in my power to cajole and prod Black Water Records into tossing a few more tidbits my way. And man, did they ever. The Estranged Singles is a charging, full on assault of primal post punk and roll, loading with intensely dark and driving bass lines, bursts of spastic, near-epileptic guitar, throaty, determinedly passionate vocals, and machine-gun pulse drumming. This isn’t droney and mopey, shoegaving postpunk. The Estranged put the “punk” firmly back into post punk. This is spiky, punchy, dark and deranged, madness, and, oh my God, is it good.

Even the singles that I loved earlier sound so much better now. I don’t know if it’s because my earlier listen was from a crappy CD-R burned from the original vinyl single and sent to me by another webzine, or if my ears have just fully matured to their sound. Regardless, I don’t have the superlatives to bring to these tracks. “Fast Trains,” begins with as dark and ominous a bass line as you’ll ever find, rumbling out of the speakers full of dark mystery and malevolence. Guitars and drums kick in simultaneously, the guitars slicing through the mix like some acidic Andy Gill offspring, the drums locking onto a mutated polyrhythmic battle stomp. The whole affair picks up energy in the first 30 seconds until it is positively exploding with tension and dark drama. By the time the vocals drop in, thick and throaty, perfectly intonated for the nastiness of the piece, I’m in heaven. Seriously. We’ve played this song at least four times on Ripple Radio and I still can’t get enough of it. Insanely dark, driving, pure punk in attitude, if not sound. Be sure to check out the mid-song breakdown, with its stuttering verse, rotating bass and absolutely histrionic guitar spasms. Breathless, I’m actually breathless.

“The Masses,” also lives up to my prior billing, blending a new level of guitar complexity into the pure post punk proceedings. Impassioned, intense, damn dark, and absolutely compelling. I hear a little of the choppy, Stoogey punk of Get Smart here, but really, The Estranged are tearing off into their territory on menacing nightmares. Brooding, the song seems to circle around me like a starving lioness hunting her prey. Then in moments of sheer frenzy the attack comes, bass flying, drums pounding, guitar flying through huge, heavily distorted runs. Stunning. 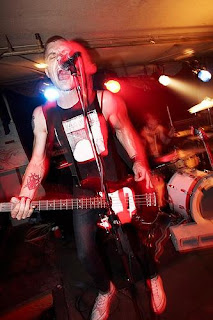 As a collection of the 7” singles from the band’s history, it’s just as refreshing to hear that their other material is just as strong. “Sacred Decay,” bristles with rough intensity like a nerve freshly dissected and left raw and exposed. More melody finds its way here, of such craft that, if it wasn’t so intense and disturbing, it’d actually be beautiful. To my ears, this is what Nirvana should’ve sounded like. And other than Dave Grohl, The Estranged are probably better musicians. Just listen to that bass, and its high run up the neck, then back into its plodding riff. Listen to that guitar tone, sounding as close to a frayed neuron as you’ll ever hear. The drumming is complex and relentless. “Thru The Night,” follows the same path, mining a similar agit-punk vibe as “Sacred Decay,” tossing another huge, sing-able melody your way.

I don’t really know the chronology of these songs, but my impression is that it’s kind of a reverse order, with the newer stuff being first, then the earlier stuff following. I may be wrong, but it would make sense as the last four songs, representing two A and B sides, seem rawer, more intense, and more directly punk than the preceding. That is in no way a criticism. In fact, it’s amazing to hear the band developing their sound, and being just as convincing with the more plowing “Statue in the Room,” or the hardcore, 80’s punk of “Nothing to Say,” as they were on “Fast Trains.”

It’s rare that a band comes along that so perfectly capture a moment of my musical zeitgeist, but The Estranged has. True to their name, The Estranged play it harsh and cold, agitated and dark. It’s a lonely world view they hold, but not one they hold alone. Count me along for the ride.

college singles said...
This comment has been removed by a blog administrator.
November 30, 2009 at 3:14 PM