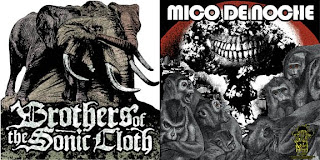 I don't care what you say, Tony Reed is the Stephen King of the music world. I don't know when that cat ever sleeps!

On top of his raving retro-seventies band Mos Generator, his much-more-than-a-side-project, blues-rock rave-up Stone Axe, Reed somehow managed to find the time to either engineer, mix and/or master each song on this bludgeoning 10" split vinyl ode to sludge and the mother riff.

But this isn't a review of that maniac Reed's work, it's a review of of the bands on this split and their assaulting homage to pummeling stoner-fied, doom-laden metal. Brothers of the Sonic Cloth start this beast off. And I do mean beast, smoke-billowing-from-nostrils, drool-dripping-from-bloody-doomy-tusks, beast. BOTSC are the resurrection of Tad Doyle, of the Seattle legends Tad, and let me tell you, things couldn't have gotten darker inside Doyle's musical brain. "Fires Burn Dim in the Shadows of the Mountain," is simply a YOB monster of a track, trudging down that mythical mountain in massive thudding footsteps of forest clearing doom and metal. The mayhem BOTSC create in the first few minutes is so violent it seems immoral. Crashing drums, like boulders falling from the cliffs, ride through gargled vocals and a bottom end so low they're having seizures in China. This would all be a bit deadening if it wasn't for the dynamite breakdown of scratching guitar midway that sends the song veering down a whole 'nother path. Still as heavy, texture layers through the drumming, the guitar lightens, adding tone to the riff. Headbanging is a must.

From there, the song is simply a trip. The bombast dropping away to a plodding bass line and drum interlude with a bluesy, near doom-jazz feel as the guitar slices in. Disembodied female vocals, trippy guitar lines, violins layering on atmosphere, lava floating in wildly distorted lamps. Like the squonk, a mytical creature that dissolves in it's own tears, the slow fade of an ending reflects how BOTSC are consumed by their own heaviness. Epic indeed.

Mico de Noche use their side to blast away any dust that may have gathered on your speakers in the time it took to flip the disc over. Already labeled one of the area's Top Ten Metal Bands by Seattle Weekly, Mico de Noche unleash an epic undertaking of thrash, doom and sludge the type of which can mar the minds of young children for life. Like taking a cannon blast to the chest, "Misanthrope," zeroes in on your nerve center with their pounding, blistering take on thrashy stoner fuzz. Impossibly heavy, with vocals that vaguely remind me of a zombie I saw last Halloween, singing between bites of human flesh. This is unrelenting, riff-massive rock and roll. Dig the acid-feedback guitar solo midway, nearly buried in the ongoing onslaught of the main riff, bass, and drum attack. "Ganges," plows a more traditional riff-angled sludge-and-groove structure but does nothing to sacrifice the heaviness. Tuneful, yet frighteningly violent, I swear I had this song in my head as the sound track to some nightmare I had one night. Add in some guitar work as thick as leftover syrup and we're talking as good and heavy as scuzz-bucket stoner metal gets.

Obviously, there's something demented in the water up Washington way. We can only hope and pray more bands take a drink from the cup. 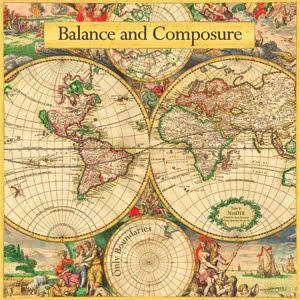 Balance and Composure - Only Boundaries

Let's start this review off straight. I hate emo. Can't stand it. The constant whine of the snotty-nosed punks makes me want to reach for the closest AK-47 and start shooting randomly, preferably in the direction of any mopey teen-aged boy wearing eyeliner.

Ok, we got that out of the way. But what does that have to do with the current EP being reviewed, you may ask, or has Racer finally blown a head gasket and began rambling incoherently, soon to be needing a straight jacket and padded room where he can't hurt himself? Well, the answer to the second half of the question that might be true, but the answer to the first half is simple. Don't make the mistake I did and think Balance and Composure's deliberate new E.P. Only Boundaries, is an emo album.

It's not, it's really so much more.

Combining a post-hardcore crunch, a post-punk atmosphere, an indy rock sensibility, and, yes, a bit of the emo, nasal-tinged vocal, Balance and Composure step up to the plate with this 18-minute, four-song E.P., and knock this screaming baby out of the park. Discordant guitar chords, chugging riffs, and explosive, heart-on-the-sleeve vocals charge these songs through moments of near-cacophony alternating with moments of deeply introspective beauty. Somehow, nothing about about this is all supposed to work so well together, but it does. Toss in the fact that the band has an average age of only 19, yet still comes across this complex and confident in their craft, and we've got a band to watch for years to come.

"I Can't Do This Alone," stats off with a tribal rhythm a la Killing Joke, before the guitars squeal in amongst a sea of feedback and effect. Bass rumbles with deliberate intention. The vocals at first are a bit alarming, atonal and piercing, but as the ear settles, the whole thing begins to make sense. As the song picks up speed and frenzy, guitars chugging with velocity, the stark beauty in the song is never lost. Listen for the glorious harmony vocal in the chorus. It's so fucking subtle, but damn, it's good. After the chorus, the boys break it down with a passage of complex beauty before that voice rips it all apart in another moment of plaintive yearning. Really, nicely done, and a song that matures and grows with each listen.

"Only Boundaries," was the song on the E.P. that caught my attention immediately. But I'm like that. Anytime you toss a bass line at me that resonates and propels the song like a booster on a rocket, I'll be listening. Chiming guitar steams across the top leading to the dual gruff and cleaner vocal verse. Choppy and punchy, the choral break drives the song forward with powerful fury, before it all drops back out to that bass line. We're not talking Nirvana-raping, slow-fast-slow shit here, this is dynamic songwriting with an ear for textures and pacing, complexity and simplicity, all evident in one song.

I won't belabor going into the other two tracks, but know that this disc really surprised me. What I initially thought was going to be another torture of emo muck, turned out to be an engrossing, slightly unsettling ride down the post-hardcore railway. You may want to get a ticket for that train yourself.