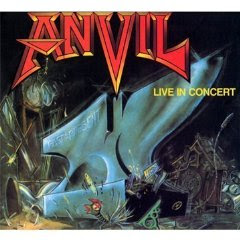 Originally released in 1989 on Metal Blade, it’s good to have Anvil’s kick ass live album back in print. This came out after their minor brush with North American success thanks to the video for “Mad Dog” from the 1987 album Strenth of Steel and right before their decline into obscurity. We all know that Anvil is now bigger than ever thanks to the excellent film Anvil! The Story of Anvil but a lot of people are unaware about how great Anvil was (and still is) as a live band.

Recorded at The Waters Club in Long Beach, California the set is mainly classics from 1982’s Metal On Metal and 1983’s Forged In Fire albums. Oddly, the album starts off with “Concrete Jungle” from Strength of Steel, a slower song from the band before kicking into the bizarre speed metal square dance of “Toe Jam” from 1988’s Pound For Pound.

“Motormount” is the first of the old classics on the album and it’s even faster than the recorded version. This is pure Nugent meets Motorhead gonzo boogie that no one else has dared to attempt. The band slow down for their personal pounding metal anthem “Forged In Fire” - a true neck wrecker this is a staple in their live set to this day. 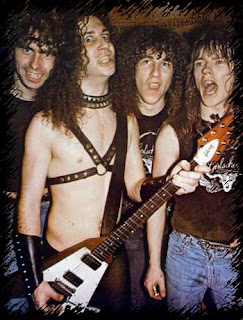 Lips is clearly excited to introduce the hockey influenced song “Blood On The Ice” because he loves it when the players “beat the fuck out of each other.” It sounds kinda like that’s what they’re doing to their instruments, too. After that they launch into their classic Iron Maiden meets UFO instrumental “March of the Crabs.” This song has had an obvious influence on Metallica with the twin guitar crunch of Lips and Dave Allison. It leads into Robb Reiner’s killer drum solo before he brings the band back in for the ultra speedy “Jackhammer.”

“Metal On Metal” gets all the fists shaking, heads banging and voices screaming the title at full volume. Barely pausing for breath, they go right into the all time classic “Winged Assasins.” Robb and bassist Ian Dickson set up a frantic double bass groove before the song lifts off and soars.

The highlight of the entire album comes with an awesome medley of the Slayer-esque “666” and “Mothra.” In the early 1980’s, “666” was up there with “Fast As A Shark” as the fastest metal song of all time. Robb’s drumming is unreal on this. “Mothra” is also a showstopper. The band really stretch out on this one and give Lips plenty of room to go nuts on the guitar. A highlight of any Anvil show is when Lips sings through the pickup of his Flying V on this song. The only thing that would improve this album would be some bonus tracks. I was lucky enough to catch Anvil live around the time this was recorded and they were playing “Mad Dog” (including Lips bringing out his bulldog Beast on stage to show off the dog’s testicles) and the vibrator masterpiece “Bondage.”

Anvil is touring North America at the beginning of 2010. If you’ve never caught them live, this will give you a good indication of what to expect. The band is a 3 piece now with the awesome G5 on bass and has lost none of its power. On a side note, if you liked the movie check out the Anvil autobiography that just came out, too. It has a lot of great stories from the early days and more behind the scenes stuff from the making of the movie. HEAVY!