Eagle Twin - The Unkindness of Crows Black Cobra is an extremely heavy duo from San Francisco and they are pissed! Chronomega is their 3rd full length album and first on the Southern Lord label. If you’re new to the band, like me, get ready for an intense assault of down tuned guitar and thrashing drums with aggravated vocals.


Unlike a lot of bands on Southern Lord, Black Cobra is pretty speedy and the songs are usually 4 or 5 minutes. Thankfully, there are no “post-rock” quiet interludes just one bone crushing riff after another. The guitar sound of Jason Landrian is huge and has so much low end that you don’t really miss the bass like in most rock duos. The album was recorded by Billy Anderson, who’s also worked with The Melvins, Sleep, High On Fire and Neurosis among many others. He knows a few things about getting massively heavy guitar tones. Rafael Martinez’s drums have plenty of room in the mix to show off his constant barrage of fills and crashes. Jason Landrian also handles the vocals and he sounds like an angrier version Tesco Vee of the Meatmen.


The opener “Negative Reversal” tells you everything you need to know about this band. Loud, fierce and uncompromising. The title track is another highlight with a rhythm that’s reminiscent of Accept’s “Restless and Wild” while “Storm Shadow” is like a longer version of “We Bite” by The Misfits. A few songs have slower parts, but Black Cobra stick to mainly uptempo jams, which helps separate them from the usual snail’s pace of doom metal. 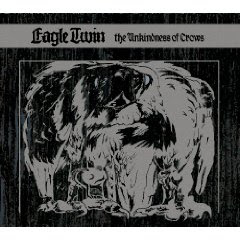 Eagle Twin, on the other hand, like their jams long, creepy and noisy. Another heavy duo comprised of Gentry Densley (ex Iceburn and ascend) on baritone guitar and tortured vocals and Tyler Smith on the drums. They describe their sound as “amps on fire” and that’s exactly what they sound like.


About half the album is comprised of 6 minute songs and the other half is longer songs. The whole thing sounds like early Melvins but recorded in hell. The vocals are deep, tortured and, well, hellish. There’s no other way to describe it. Maybe like Tom Waits sitting in with Hellhammer. The guitar is tuned low and played through a mountain of amps and the drums sound like 1000 of Satan’s slaves rowing against the tide of the river Styx.


My suggestion would be to pick both of these up and play them mixed together for maximum negative impact. Black Cobra are for when you’re hyper and pissed off and Eagle Twin take care of all your slow boil needs.