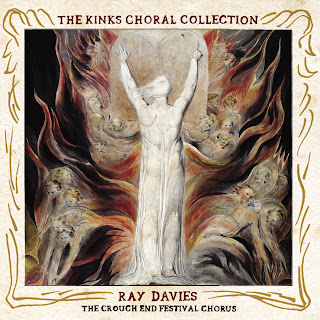 Another nifty little Ripple tidbit here. Ray Davies, the legendary lead singer of the Kinks, long one of our favorite bands, has a new project coming to disc soon.

The Kings Choral Collection presents new versions of classics such as "You Really Got Me", "All Day And All Of The Night", "Waterloo Sunset" and many more, all featuring the 65 member Crouch End Festival Chorus.

Choral Kinks. How cool is that?

Produced by Davies himself and with uplifting, sometimes epic, choral arrangements by David Temple, Steve Markwick and Davies - The Kinks Choral Collection features a six-song suite from the 1968 album The Kinks Are The Village Green Preservation Society, widely regarded as The Kinks' masterpiece.

Often referred to as "almost indisputably rock's most literate, witty and insightful songwriter," Davies had the ambitious idea to collaborate with the 65-strong Crouch End Festival Chorus at the 2007 BBC Electric Proms in London to create The Kinks Choral Collection.

Ray said of his Crouch End vocal colleagues; "With a song like 'Waterloo Sunset', I feel as if the people I wrote it for are singing it." Hearing 'See My Friends' recast as an acappella gospel hymn is instantly striking, hugely magnifying the impact of Ray's life-after-death lyrics. Overall this album offers much to explore and admire from fans who own the entire Kinks catalogue on vinyl or to complete newcomers.

And if you've never had the chance to hear a whole choir accompanying Ray Davies as he goes through Kinks standards like "You Really Got Me" or "All Day and All of the Night," then you have a special treat coming.