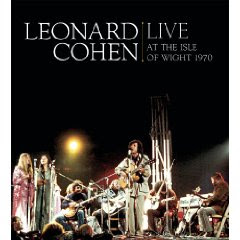 As legend has it, nearly 40 years ago on August 31, 1970, a 35-year-old Leonard Cohen was awakened at 2 a.m. from a nap in his trailer and brought onstage to perform with his band at the third annual Isle Of Wight music festival. The audience of 600,000 was in a fiery and frenzied mood, after turning the festival into a political arena, trampling the fences, setting fire to structures and equipment - and stoked by the most incendiary performance of Jimi Hendrix's career.

But Cohen was up to the task. Onlookers and (fellow festival headliners) Joan Baez, Kris Kristofferson, Judy Collins and others stood sidestage in awe as the Canadian folksinger-songwriter-poet-novelist quietly tamed the crowd. His understated, near monotonous baritone struck deep into the crowd, striking a collective nerve deep within their chests.

The CD captures Cohen's complete performance, and all the tracks are previously unreleased (sans bits of "Suzanne" which were featured in the documentary Message to Love). Included are live, definitive versions of classic songs from the first two Leonard Cohen LPs: "So Long, Marianne," "The Stranger Song," "Hey, That's No Way To Say Goodbye," "Suzanne," "Bird On The Wire," "You Know Who I Am," and "The Partisan" as well as spoken word and poetry.

Just listen to the plaintive honesty in Cohen's rendition of "Hey That's no Way to Say Goodbye," or the tender fragility of "Suzanne, " and it becomes immediately apparent why Cohen was already a budding legend.

Buy here: Live At The Isle of Wight (CD/DVD)

The Ripple Effect said…
Hatter, you're welcome to crash here anytime! As for Them Crooked Vultures, they played at ACL while we were in Austin. We didn't seem them, but to be honest, the buzz and word was very mixed. Good musicians, no songs. If you've heard something that turns you on about them, please let us know. I'd love to see them hit it big.
October 18, 2009 at 12:11 PM

Anonymous said…
Really? Just a curiosity, I had read about some guy who reviewed the show but who didn't actually attend it; I hope he isn't the basis for it. Regardless, yes they played songs. Very good ones. The only non-song, arguably, would be the last one, where they launched in a long jamfest. Besides that aforementioned retard who had bad things to say without hearing anything, I've heard nothing mixed, all effuse praise. Personally, it was one of the best shows of my life, and I didn't know 90% of the songs. Top that, hehe.
October 19, 2009 at 8:51 AM