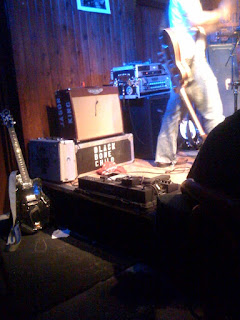 We knew full well on our arrival in Austin that the city’s second largest music festival of the year, Austin City Limits, was in full swing and truthfully, we couldn’t care less.

We weren’t there to see Dave Mathews Band or Mos Def or any number of indy hipsters. No, our several thousand mile journey from California had one goal, one destination, one target in mind. Only a drink from one well was going to quench our thirst. A sip from the dirty swamp water that is Black Bone Child.

The Saxon Pub is a long way from the manufactured-to-please-the-tourists, blues sound of the Stevie Ray cover bands on 6th street. It’s warm and airy, even if a touch small, with a card room in back headed by a gun packing 55 year-old red headed mama who looked like she’d clean out my wallet, claim my mortgage, and steal my record collection all in a single hand. Nicotine yellow stained her fingers as she doled out the cards to the hardened faithful, turning a sly, I’m-gonna-take-you-blind eye my way. Being a rather big and burly guy, I did what any macho, red-blooded American male would do when his masculinity was challenged by a lipstick wearing hellcat gambler--- I turned tail and ran as fast as I could towards the bar.

Finding relative safety in a glass of Lone Star beer, the Pope and I settled in to wait for our boys. Arriving late, we missed most of the set of the Stephen Bruton Tribute Band. Unfortunately, neither Pope nor I knew who Stephen was, but we garnered a couple of things; he created some amazingly soulful, melodically tasty blues tunes, and he was incredibly well loved by the Austin locals. The standing room only crowd threw themselves into their applause with full body and heart for the three songs we heard, and deservedly so. Sung by a grey-haired bluesman with a voice so warm it could melt the polar ice caps, these songs were amazingly crafted, incredibly tuneful numbers with a gentle bluesy swing. We’ll definitely be looking up this cat’s back catalog, and wish Stephen good rocking in heaven.

Having said that, a crowd gathered to pay respects to their lost hero isn’t necessarily the best crowd to follow when you’re a new and relatively unknown band. And that’s what faced Black Bone Child that night. This was made abundantly clear as vocalist/guitarist Donny James and vocalist/bassist Kenny M. were setting up their gear and the two 50’ish women sitting at our table rose to their feet, saying “think we’ll move to the back. They seem kinda loud.” Pope and I cast a concerned look each other’s way, worrying about the mountain the Black Bone Children had to climb to convert this crowd. We knew for a fact that they were gonna be “kinda loud.” It’s a testament to how well they rocked the joint that those same two ladies came back, dancing, by set’s end, but we’ll save that story for later.

Fully tuned, with the crowd claiming indifference, Donny took to the stage, alone with his slide, hollow-body guitar, and filled the pub with what can only be described as a heart-rending treat of swamp gospel. What balls does it take to introduce yourself to the crowd, near acapella? Donny’s soulful voice resonated off the wooden walls and rafters, filling the space with his plaintive tone. Man, that struck straight to the solar plexus. And if wasn’t just me. Let’s forget the Pope for a while, who was a raving, whiskey-drinking, applauding, damn-appreciative, whooping maniac the entire show. With that one number, the crowd took notice, taking their first tentative steps towards the stage, heads bobbing in the universal music-appreciation nod of approval. As the last note was resonating from Donny’s hollow body, BBC took the stage, guitarist Jason King and drummer Steve Hudson rounding out the band, and exploded in a full-on freight train of thundering swamp-filled stomp rock. 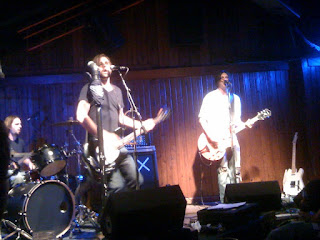 Now, let’s uncover my bias right away. Anyone who’s read my review of the Black Bone Child album knows how I feel about these guys. But seeing em live was something else. They unearthed a powerplant of energy and intensity in their performance, from the very first number, that could fuel the electric needs of several small nations. Ripping through album standards like “Ha Ha, Hey Hey”, “Light up the Sky,” and “Mine,” these cats mine deep into a song, finding it’s inherent groove like a pack of ‘49ers digging for a vein of gold in the motherlode. Once discovered, stripped down to it’s most basic, elemental essence, BBC lock onto that groove and ride it like it’s their own stairway to heaven. Nothing you’ll ever hear rocks and grooves so hard all at the same time. And they don’t overdo it. The band knows dynamics, dropping out the bass, riding the drums, inserting a vocal harmony out of nowhere, or lighting a bonfire of harmonica. They mix things up enough, often enough, to keep the song fresh and alive. Then the groove comes back, sounding meaner the next time, like a snarling bull released from the pen, and all hell rises to the dancefloor. This is danceable rock. Rather, this is rock that makes it impossible to sit on your ass.

Black Bone Child play it incredibly loose and tight all at the same time. Watching these cats, each member is going off like jazz musicians lost in their own musical nirvanas, then they bring it all back together effortlessly, never losing sight of that all-prevalent groove. Donny breaks from the intense soulfulness of his voice to fly off into the netherworld on his hollow body, telecaster, or Les Paul. Kenny is a human perpetual motion machine, feet always stomping, hair flying as he works that bass, sings, and wails on the harmonica. “Whiskey” Jason attacks his guitar like a man pissed off at his ex-wife, while “Tucky” Steve drives the whole creation from the back of the bus. To call it breathless is an insult to breathing. This is sultry and sweet-like-molasses, sweaty, fully-humid rock and roll.

As those two previously mentioned ladies came racing back towards the stage, hands clapping above their heads and asses swinging, we all knew we were watching something special. This is a band on the verge, rockets primed, countdown on. It’s impossible to conceive the entire city of Austin not taking notice every time Black Bone Child plays. As the cats ended their set with the gotta-be-a-hit “Baby, Baby,” and into the absolute swamp stomp of “Watch it Burn,” we knew. We all fucking knew.

In a city dominated by music, Black Bone Child will dominate this city.

Hanging out with Donny and Kenny in the parking lot, long after closing time, the sky flashed in a coordinated display of lightning without thunder. A light show from above, as if even the very air around us knew that Black Bone Child needed a bigger stage. Their chance to light up the sky.

To hear what all the fuss is about, tune in tonight to the Ripple Radio Show on blogtalkradio. Donny and Kenny (and perhaps Jason and Steve) will be joining us live, acoustics in hands, stories in mind, sparkling merman at at the ready, and fresh music loaded and ready to tear through this wireless thing we call an internet.

Just hit that funny looking blogtalkradio button to the right, 8 pm Pacific Time, and listen as Black Bone Child burns it down.