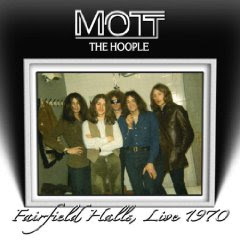 Most people, especially in America, only know Mott The Hoople for “All The Young Dudes” and “All The Way From Memphis.” Before they got involved with David Bowie in 1972, Mott put out 4 albums on Island Records, toured the world, broke up, reunited and signed to Columbia Records. The majority of Mott best of’s ignore the early years and concentrate on the “glam rock” era. It’s not surprising, since they never had any hits and the Island albums are a bit of a mixed bag. All of them have some great songs but suffer from too many ballads and a fairly thin sound. Brain Capers is probably the best and Wild Life is the weakest (the band refer to it as Mild Life).


But like most bands of the late 60’s/early 70’s, the live show was where Mott the Hoople really excelled. In honor of the original line up reuniting for its 40th anniversary and 5 sold out shows in London this October, let’s check out some vintage Mott from 1970.

Angel Air is a UK label dedicated to putting out rare and live Mott related releases. This live show from September 1970 (opening for Free) is kind of a holy grail among fans since it was recorded for a possible live album at the time but was rejected for some minor technical problems when the audience went berserk and invaded the stage during the encore.


They start off their set with a cover of Neil Young’s “Ohio.” The Kent State murders that inspired the song occurred in May 1970 so this song was still very new and on the minds of young people everywhere. Guitarist Mick Ralphs sings this one and you can hear the crowd responding. Ian Hunter takes over vocals on the long ballad “No Wheels To Ride” from their second album Mad Shadows. 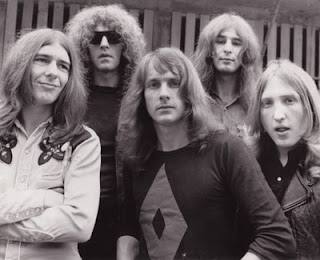 Just when you think the energy is about to drop the band rips into one of their most ass kicking songs “Rock N Roll Queen.” Ian Hunter switches from piano to join Mick Ralphs for a savage 2 guitar attack. The rhythm section of Overend Watts (bass), Verden Allen (organ) and Dale “Buffin” Griffin (drums) rock so hard that you can’t help but boogie. This is what the Rolling Stones wish they sounded like at their peak. Mick Ralphs is back at the mic for “Thunderbuck Ram” a moody but ferocious song with killer guitar tone.


The band takes a break while Ian sings the piano ballad “When My Mind’s Gone” but come storming back for a frenzied take on Little Richard’s “Keep A Knockin.” This is the only song that was ever officially released from the show. It was tacked on to the end of the very mellow Wild Life album to give it a little bit of energy. The show ends with a violent instrumental version of “You Really Got Me.” This is when the crowd decided to invade the stage and knock over microphones and get wild.

This CD adds 5 songs from a show in Sweden from 1971 that also show what a potent live band Mott was in their prime. They open with a great version of Mountain’s “Long Red.” There’s another version of “Thunderbuck Ram” that’s even more high energy than the 1970 take and a killer version of the uptempo boogie “Walking With a Mountain.” If you’re a fan of this era, it’s worth trying to track down the out of print CD of their BBC sessions called The Original Mixed Up Kids. It’s from the same pre-Bowie era and has a great sound quality and song selection.


The current issue of Classic Rock Magazine has a big article on Mott’s reunion and Mojo Magazine also did a really great history on the band a few months ago. Mott The Hoople is kind of a forgotten band these days but they have a pretty fascinating history. They’ve influenced a pretty diverse bunch of bands – Mick Jones of the Clash used to follow them around all the time and so did Joe Elliot of Def Leppard. Morrissey is a huge fan as well as Nikki Sixx. Twisted Sister used to cover “Rock N Roll Queen” back in their bar band days. They sort of paved the way for the New York Dolls and even Aerosmith with their mix of glamour and raunch. Turn it up and check ‘em out.

bob_vinyl said…
Awesome. The only thing I have from this period is the Rock n Roll Queen album, which collects some of their early material. They really never got huge in America and prior to All the Young Dudes, they were practically unknown here, so it's good to see something on them.
October 8, 2009 at 8:52 PM

Woody said…
The Island albums are kinda spotty but Brain Capers is pretty solid. The album called "Mott" is actually a much better album than All The Young Dudes. The live album from 1973/74 is awesome.
October 9, 2009 at 6:49 AM

JohnnyRock said…
The reunion shows were awesome! You can see and read about them on my blog called Mottober linked from my website www.mottthehoople.ca

Check it out, October 28th, at 8 pm pacific time on Ripple Radio, we're going to have some tracks taken from the reunion shows blasting across the radio. We're also going to have Bob Vinyl and Woody (who wrote the Mott review) live on the radio.

Come join us. Phone us on the air and add your two cents. Tell all your website fans to tune in. We'll have a Mott party.