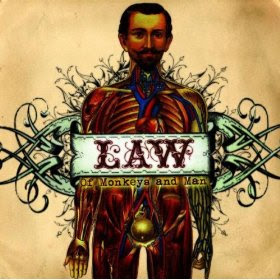 LAW – Of Monkeys and Man


By now, you all should know my love for music that’s played just left of center. Music that’s written, played, performed, whatever that’s too avant garde becomes noise to my tender ears. I always like it when my “weird” music has a level of accessibility to it, and by accessibility, I don’t necessarily mean commercial, which always has the connotation of sell out. Nah. That’s not what I’m talking about. I’m talking about the music that’s filled with unique melodies, but melodies nonetheless, while still being unnaturally heavy or bizarrely off time or unorthodoxly performed. Enter LAW, maybe better referred to as Lucifer At Work and their brilliantly realized Of Monkeys and Man. Layered with healthy doses of alternative metallic energy, these guys bring a fresh sound into the mix. Utilizing violins in more than a mere textural role, LAW treat my ears with a sound that’s caught somewhere between the heavy crunchiness of Black Album era Metallica and spastic compositional talents System of a Down. Throw in that haunting tone of violin at key points within the rhythms and for their own time in the spotlight during solos, and you get to hear something novel without sounding forced.
“Brain Probing Relativism” captures this band bringing all of these unique elements into play at the same time. That violin is downright creeping, creating a sound that could accompany a wandering patron of a darkened hotel as they silently stalk through the empty and dreary hallways through the dead of night. Bare feet padding quietly on the throw rugs as flames from the candle in hand threatening to extinguish itself, ultimately leaving the bearer of said candle immersed in darkness . . . and left defenseless to unknown terrors lurking in the shadows. Seriously, these guys do a fantastic job of creating mood with their music! Only four songs long, one still gets the sense they’ve been on the journey of a lifetime after listening to this little known gem due to the massive array of music attacking the senses. Of Monkeys and Man is a progressive musical experience in the sense that the music is constantly moving forward and dragging the listener along the road . . . whether the listener wants to go along or not. www.myspace.com/luciferatwork 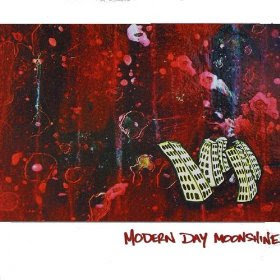 Modern Day Moonshine – S/T
And now for a trip to a time when music was just, well . . . the stuff that had the power to change the world because we believed in it so damn much! Modern Day Moonshine immediately takes us back to the early 70’s with the fuzzed out rockin’ guitar sound blended seamlessly with the acoustic singer / songwriter vibe of the same time period. Think Doobie Brothers mixed with E.L.O. mixed with James Gang mixed with . . . hell, you get the point. God, this is good rock ‘n roll. Filled with heart wrenching melodies and vocals that both invigorate the spirit and make the soul introspective, and all wrapped around strong compositions, Modern Day Moonshine found the formula that made the Masters of the past what they are. Masters of a great song. But don’t go thinking that these guys are aping or blatantly ripping off the jams of anybody. This five song collection stands on its own merits as music that has power. Power to inspire listeners to bigger and better, greater and greater feats. Yeah, I know. Bold statement, but before you condemn me, listen to the music. I mean, really listen to the music.
“Make Up Your Mind” jumps out the speakers with a funked out bass line and sterling six string action. The vocals have a warmth and soul to them that makes them oh-so-compelling, and they flow perfectly with the groove. You won’t need to pay close attention to the guitar work because it’ll simply smack you over the head with its everlasting flavor. “Running Out of Time” is a the soundtrack to a lazy summer afternoon perched on a rock overlooking a quiet meadow or placid lake. Soulful vocals make the song a little more serious, but enter the dueling acoustic guitar and banjo, and let the light heartedness take control of your two left feet. I simply dare you to listen to a jam like this and not crack a smile. Apparently, these guys are a San Diego outfit and were the house band for The House of Blues in S.D. I’m thinking I need to get out more. www.myspace.com/moderndaymoonshine 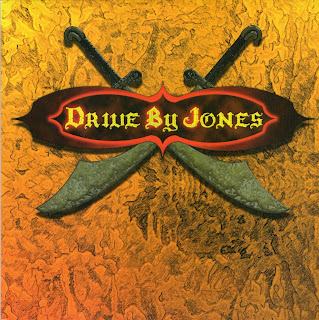 Drive By Jones – EP
Speaking of San Diego outfits, there’s a fresh group of musicians who are mixing the low end drone of reggae with some of the quirkier tones of alt rock and ultimately creating a sound that is damn near impossible to categorize. That’s a good thing. Drive By Jones have captivated me with their self titled five song EP with a clean, yet warm, production and simply writing / performing their songs in their own unique voice. Five reggae songs in a row would have bored me to tears. Five straight up rock songs would have been too much of that same old song and dance. But five songs mixing the two styles with further elements of ska and an ever so slight touch of metal, well . . . now we have something that will have me returning time and time again.
When this disc kicks off with “Soul Tree,” all of the instruments fall into place perfectly. The complex polyrhythm’s, the warm tones of the bass acting as the counter punch to the sharp and clean tones of the guitar, the subtly elaborate textures of the keyboard, and the smooth, yet somewhat manic vocals all work in conjunction with one another to create a damn good jam. My God . . . the groove to this song has some serious power as you’ll find yourself uncontrollably bobbing your head, tapping your toes, swaying in your office chair or bar stool . . . your choice. “Unforgive” takes the tempo of “Soul Tree” and drops it down, giving the instruments greater space to do their individual thing. Each member of the band seemingly is playing for their own muse while sticking with the theme of the tune. Dig the guitar and keyboard solos on this one and then the subsequent breakdown, bass followed by drum accents, then the return of the whole band. That, my friends, is just good wholesome songwriting. And then there’s “V-Rex,” a song about a vegetarian T-Rex. You have to listen to the lyrics on this one a couple of times because they come at you from all angles and all speeds. Up tempo and a damn happy tune, I also found it quite educational. Nowhere else in the music world will you find that asparagi is the plural form for asparagus. www.myspace.com/drivebyjones 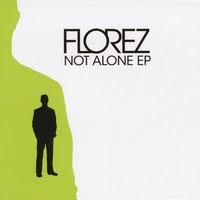 Florez – Not Alone EP
This is a solid four song set of poppy, alt rock that reminds me, at times, of bands like Weezer. I could listen to something like this all day versus anything that Coldplay has ever done. Why aren’t these guys on every radio station or in every commercial between football games or on huge billboard signs centered in Times Square? These songs are dripping with melody. Like the juices from an oven roasted pork shoulder, these songs are big, fat melodic pieces of music secreting flavorful and memorable sounds. And, on top of that, the songs are exciting little stories capturing the characters in a concise, three and half minute package.
This disc grabbed my attention right of the opening track. “Not Alone” comes out rocking with guitars tastefully distorted, but then the guitars drop out of the mix and we’re left with the bass propelling the tune and accompanied by succulent vocals of the band’s namesake, Alex Florez. And here’s one aspect to this recording that keeps me as intrigued as I am. The voice. Florez, the singer, has a warm and inviting voice, which he has masterful control over. He gets a little rough and gruff from time to time just to spice up the addictively melodic portions of the tunes. Love it! If he was just approaching the songs from the aspect of smoothly following the melody with no inflection, or without his natural vocal nuance, the songs would be standard. Not necessarily forgettable, but not nearly as memorable. “Uncle Frankie” is another gem. Acoustic guitars provide the base for this track, shifting from finger picking to heavy strumming as the song moves along . . . and move it does. Dude! Listen to the various elements within this track! A stop here, a subtle guitar flourish there, quivering voice to strong and empowered chorus along the way, and the richest of bass tones throughout . . . this is the kind of songwriting that put’s a smile on my face. Waveriders . . . you don’t want to miss out on this disc! www.myspace.com/florez