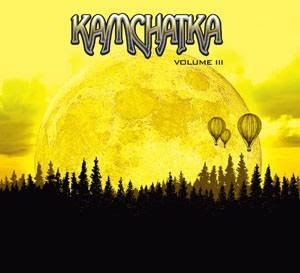 It doesn't take more than one second of this dynamite new release by retro-seventies rockers, Kamchatka, before you feel it. Listen to that low rumble of bass approaching, thudding towards you like an approaching seismic event. Feel it carrying something heavy in it's momentum. Something ominous.

When the words "retro-seventies" rock are bandied about, it's usually followed by the term "stoner." Don't make that mistake with these guys. This isn't stoner rock, or psychedelic, or acid rock for that matter. This is simply an outrageous guitar-heavy, ultra-groovy eruption of heavy rock. Emphasis on the word groovy. Also, don't make the mistake of letting the three-piece alignment fool you into thinking their sound is limited. I've seen Kamchatka referred to as a power trio, but this does nothing to capture the sound of the band. Sure there are three of them and sure their music is laced with power, but this ain't no Rush we're hearing. Or Budgie, Motorhead, Triumph, or even Grand Funk Railroad. "Power trio" does nothing to capture the cosmic waves of psychedelic exploration these cats bring, or the out-of-the-blue jazz passages, or the intense rumble of the blues based, massively distorted riffs, or the endless fertile pastures of jam rocking.

No, power trio doesn't work. Stoner rock doesn't work. We need another label, a whole new vernacular to describe this band. A new language that incorporates everything these mind-friers bring to the table. 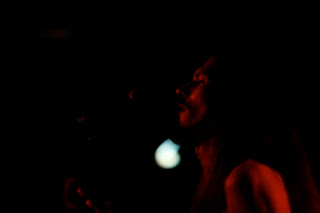 So what exactly is Kamchatka? Well, for starters they took their name from the volcanically active Russian Kamchatka Peninsula that divides the Okhotsk and the Bering Sea, and that's as good a place to start as any. That God-forsaken stretch of land, barren and whipped by terrible seas, is home to about 160 volcanoes. If you were to go there, your face would be buffeted with the force of the wind, your soul would stir from the stark beauty, and the ground would rumble under your feet from the power of the thermonuclear energy beneath you.

I'm not just tossing around hyperbole here. These cats take the basis of seventies rock and simply put it through there own thermonuclear blues reactor and watch it bubble to the top in an overflow of molten rock. When they lay down a riff, it's like bedrock foundation, steadfast in its intensity and searing with it's heat. Take that riff and sprinkle across it the delicate touch of jazz, prog exploration and some freaking mind-bending extended jamming and we're getting closer to describing their sound. 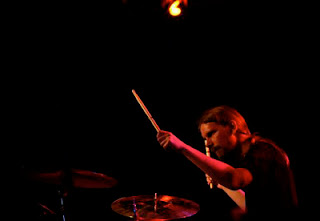 "681" starts us off with that previously mentioned rumble of Roger Ojersson's bass, laying down the inherent groove that flows through this album like a vein of hot magma. By the time the guitar sears in, the song simply erupts in molten seventies rock splendor. Thomas Andersson has an amazingly warm voice, laced with a belly-full of soul, and a tone to his guitar that's as incendiary as flaming ash. There's no other way to say it, this song just simply grooves, familiar in all the right ways, yet totally it's own creation. Two minutes and forty-nine seconds will never pass so fast as when you're rocking out to this treat.

"Pathetic," erupts next, riding on the explosive thunder of Tobias Strandvik's drums. The riff is as threatening and powerful as the colliding of Teutonic plates. You've not heard this riff before, it's totally new, like the earth being created out of the lava flow. It's mean and nasty, just as the lyrics describing a love relationship turned angry and spiteful. Yet, despite that intensity, or maybe because of it, the chorus break comes across as a beautiful break from the darkness, like a sliver of sunlight slicing through the volcanic cloud. Midway through, the song simply plows through as metal a section as you'll find on any stoner rock album, before disintegrating right before your eyes, into a stunning, mesmerizing passage of near-pastoral prog/jazz rock. The transition is seamless and breathtaking. Instantly, your grip on the nastiness that preceded evaporates and you leave the gravitational field of this planet, soaring high above the steam and destruction below. But don't worry, before you know it, the riff rages back, full of all the bitterness of a scorched heart. Amazing stuff, I know my Ripple brethren the Pope will freak over this one!

"Astrobuck," lives up to it's name, launching off with a rolling, muscular stoner-esque riff, before breaking down to a quieter vocal passage. Ojersson, who shares songwriting and singing credits, shines here, his bass pummeling the song like a barrage of expulsed basalt lava. When I say this riff rumbles, I mean it rumbles seismically. It registers on the Richter scale. 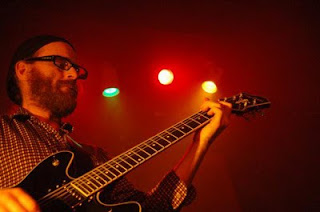 Then, just when you think you've got the terrain surveyed, the boys shift the landscape with the full out prog excursion of "Look Over Your Shoulder." But don't let that "prog" term scare you, this isn't endless arctic noodling, this song possesses an amazing warmth and delicacy. Acoustic strummed guitars hinting at a fragile beauty underneath Andersson's voice. Slowly the organ fills in from underneath, impeccable jazz drumming tripping across the snare and cymbal like a Pacific rain. Slowly, the song builds in intensity, like the accumulation of siliceous magma, kinetic energy accumulating just under the surface. Don't miss the organ freakout 3 minutes in. They just don't write em like that anymore.

All that energy stored during the last song reaches it's boiling point with "See," riding across as low and thudding a bass tone as you're likely to hear. Melted into their "stoner" riff madness is a definite jazz feel. It's there, in the textures of the organ, the composition of the verses, the smoothness of the chorus. How many times have you ever called a riff-fest stoner cavalcade beautiful? Well, here it is. Stay seated while the song fades away, breaking down to a soulful excursion in guitar-based jamming. How gut wrenching is that solo? Dripping with emotion. Then, when the riff roars back, . . . oh mother. Nicely done.

No doubt about it, this album, will be in my 2009 year end Best of List. Guaranteed.

Are you getting a picture of these guys yet? If not, how about this. Being one of the most seismically and volcanically active spots in the world, in 1737 a mega thrust earthquake rocked the Kamchatka Peninsula. 9.3 on the Richter Scale, laying waste to the region. That was followed immediately by a series of gentler aftershocks, looser movements of the earth, that rumbled and grooved after the heaviness.

Loakers said…
Excellent review my friend, spot on! I have been enjoying this album in vast quantities lately with a good friend. We even got to see them perform live recently! The imagination and scope of this music is still blowing my mind open. I love it. Incredible start to finish. That voice will be huge in years to come. What a treat of an album.
December 31, 2009 at 11:05 AM