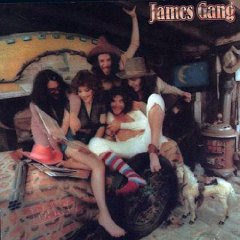 Ah yes, the musical exploration and subsequent discovery continues! For this album, I have to thank Racer because without him, well . . . I wouldn’t really know anything about Tommy Bolin other than he played in Deep Purple for a short spell and then died. Racer’s seemingly endless vat of knowledge on the subject of Tommy Bolin is nothing short of amazing, and a vat that I return to frequently in hopes to gain more and more insight on one of the music world’s most overlooked talents. I had an impression that Bolin had a couple of solo albums, so that wasn’t a great surprise to me. What got me was that Tommy Bolin called the James Gang his home for a couple of albums! Yes . . . the James Gang that formerly hosted the songwriting talents of Joe Walsh. Tommy Bolin was in the James Gang? Trip out! So, already having a copy (or two, or three,) Racer stuffed Bang into a pile of vinyl that I was lugging home via airline (never an easy accomplishment) and encouraged me to give it a spin as soon as possible. And, I did!
Let’s get into this gem, shall we?

The first thing that struck me once I got passed the initial pops and crackles of the needle riding along the grooves of the vinyl was how that freewheeling swagger of 70’s rock made me feel. It’s like hearing the thrumming bass line and tastefully distorted guitars triggered some latent memory from my youth. Though I don’t remember ever hearing these particular notes played in this particular order, it doesn’t necessarily mean that, at one time or another during my infancy, one of my neighbors (baby sitter perhaps?) wasn’t playing “Standing in the Rain” at volume eleven. The melody reminds me of a time forgotten, the vocals of Roy Kenner sung in that tone nestled comfortably between street-wise tough guy and sensitive, wine sippin’ lover boy. Bolin’s guitar work is instantly recognizable, even though he barely grazes the level of his soulful abilities on this track . . . almost like James Gang and Tommy Bolin are feeling their way into this new relationship. If that is the case, then it’s a match made in heaven by the time track two opens up. 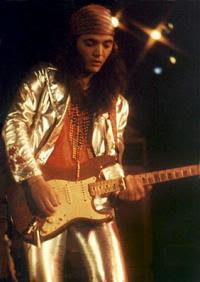 “The Devil is Singing Our Song” is a slowed down, heavy blues based groove monger. My God! The power and emotion bursting from this song is palpable. The tight grooves of the vinyl can barely contain the power of this bunch as they kick out a jam that makes it sound like this group of men were formed of the same DNA. Tight. Heavy. Emotive. The rhythm is perfectly paced to give the vocals and guitars the time to do what they must. Kenner’s vocals have that gruffness through the verses and suddenly split the air like a banshees wail as he belts out the chorus. As great as Kenner’s power performance is on this track (which gets better every time I listen to it), it’s the mystifying talents of Tommy Bolin that comes into its own, forcing the spotlight to split time between the impassioned vocals and the tastefully executed guitar licks. Not just in his approach through the solos, which area actually quite understated, but his rhythm work has a flavor that plays fancy with the imagination. Listen to the beginning of the tune as Bolin quietly accompanies the bass, patiently lurking in the shadows of the groove, and then as the second verse starts to take off, his six string voice begins to play more of a prominent roll. By the time the chorus kicks in, Bolin’s guitar sings alongside Kenner’s voice and little white rabbits are pulled out of top hats. Magic, baby!
Musical epiphany No. 563 occurred as I got to the midpoint of the final track on side one. “Alexis” is remarkably beautiful, eloquently vocalized, passionately performed, and epic in composition. From the opening strumming of the acoustic guitar, to Bolin’s touching vocals, to the searing lead work ushering the song to a close, Bolin penned a classic that no one is talking about. In my mind, there is no reason in the world that this song shouldn’t have been on the top of the charts in ’73 or ’74. The vocal melody reminds me of Rupert Holmes’ “Escape” (also known as “The Pina Colada Song”,) which just makes the tune addictively fun to listen to, but then it builds with emotion and vibrancy, ultimately growing into a beast of a tune. The guitars grind out a heavily distorted rhythm while a second track highlights Bolin’s soaring lead work, finally fading into quiet as the turntable spins itself to sleep. After listening to “Alexis” again, my heart’s all aflutter, not so much from the massive amounts of caffeine that I’ve ingested, but more from the pure emotion that was left on this recording. Something to chew on while you’re listening to this is that Tommy was only twenty-one . . . twenty two years old when this album came out. What really gets me about that is how well he was able to convey that amount of emotion at such a young age. Talk about someone who was in tuned with their feelings! 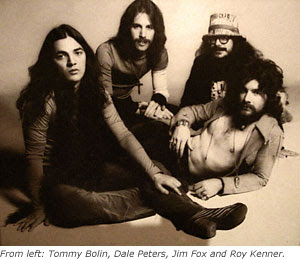 Side two shows the diversity of this group a little bit more than the first side, kicking off with a burner in “Ride the Wind” as it fully captures that early 70’s rock vibe, complete with big fat power chords and driving rhythms. The tune is powered by the rich vocal melody and performance of Roy Kennar, flavored with textures of synthesizers, as well as Bolin pulling off some well timed hammer on’s. The acapella “Rather Be Alone With You” is the lone track that Tommy Bolin doesn’t get credit for writing and the tune shows more of the musical diversity within James Gang. And, to further drive home the point of musical diversity, “From Another Time” is jam packed with a polyrhythmic funk vibe, layered over with both scorching guitar work and soulful blues licks. “Mystery” becomes musical epiphany No. 564. Warm toned acoustic guitars provide the basis of the song, textured with piano’s and synthesizer’s, and Kennar’s stellar voice. All of the musical elements layered on top of each other create another sonic epic and one of my favorite ways to cap off a brilliant album. Finish the whole thing off with the a song that inspires so much that you either want to go build a rocket ship or listen to the whole album one more time. I’m not much for interstellar flight, so I think I’ll listen to Bang again.
After reading through the liner notes, one might think that this was a Tommy Bolin solo recording being that he wrote or co-wrote eight of the nine songs. And, maybe in some ways, it is. There’s no doubt that Tommy was still refining the art of songwriting, which would receive the full glare of the spotlight on his two solo releases, Teaser and Private Eyes, but the songs that he contributed to James Gang are pieces of priceless rock freshly drawn from the earth of rhythm and rhyme. Personally, I find this entire album to be both artful and straight up rockin’. “Alexis” and “Mystery” are two finely crafted songs that can lift the spirits and inspire further creativity, while “Ride the Wind” and “From Another Time” allow the hair to fall from their tightly wound perch and let us cut loose. Though it may be well known in certain rock communities, Bang is a relative unknown in the grand scheme of things, and I’m thrilled to death that I was able to enrich my collection with its glory. Racer . . . once again, I tip my hat in thanks. I look forward to returning the favor. - Pope JTE
Buy here: Bang

Woody said…
I've been meaning to get this album for years. Tommy Bolin is such an incredible guitarist.
October 2, 2009 at 6:57 AM

The Ripple Effect said…
Woody - I couldn't agree more. I'd heard the name growing up, but again, none of my friends were into him, so therefore, I wasn't into him. Then along comes this Racer guy and he cracks open my skull and fills it with massive amounts of musical knowledge and I feel like a better person for the pain.

We passed up a copy of the second Bolin James Gang disc while in Austin. At least, I passed on it and I don't remember Racer taking it with him. Racer? Comments?

Anonymous said…
This has been one of my absolute favorite albums since it came out! I did a lot of head banging, back in my day, to these guys! Bolin was a god! Totally underrated album/band. EVERY song is great. Nice article. Thank you...Standing in the rain, in Indiana. Mike :)
December 9, 2012 at 4:43 AM