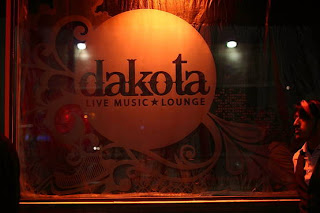 It’s no secret that Petty Crux are a Ripple favorite, so it should really come as no surprise that when we received an invitation to catch the band,s first live performance, with their new members in tow, that a Ripple representative would be in attendance. Little did I know that it was going to be lil’ ole me! After all, it was Racer who first heard their album All That Survived The Crash and was so high on these guys that he whipped out some bizarre form of Greco Roman torture, contorted me into pretzel form, and beat me over the head with the album until I fell in love with it. I was left aghast that he didn’t catch the first flight from the Bay Area for this gig, and even more aghast that he would think enough of my abilities to capture music in the live setting to send me off to tackle this assignment. So, with bags packed and a crash pad all set up, I piled in the Popemobile and made the relatively short journey up the I-5 to LaLaLand.
Slowly and organically becoming an industry hotbed for unsigned music, The Dakota Lounge http://www.dakotalounge.com/, strategically located at 1026 Wilshire Blvd. in Santa Monica, played host for the night’s events. The staff of the club is top notch, friendly and approachable, and they gave the patrons of the club a feeling of belonging. I never once got the impression that I was trying to compete with the “pretty people” of L.A., but that I was taking part in an event where the music was taking center stage and my enjoyment was paramount.
It had been a long time coming for these guys to make their way back in front of a live crowd and to talk to any of the band members prior to the gig, well . . . one would see that they all had a distracted approach to the conversations. They were aching to get under the lights, strap on their gear, and cut loose. Like an athlete sidelined for an extended period of time, unable to perform due to some injury, but one who’s competitive fire was left raging unchecked . . . that was Petty Crux. Light hearted, yet focused on the performance at hand. And when they did eventually take the stage, the packed house shook. The band hand delivered a set of heavily melodic rock with efficiency, musical proficiency, and a level of professionalism that sometimes seems to be lacking in the music world. 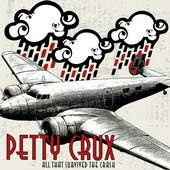 With newly appointed bass meister, Zach, laying down a groovin’ foundation of low end, Petty Crux opened the night’s set with “What Do You Care.” Clemente’s smooth as aged whiskey voice crooned out the verses, and to see the glimmer in his eyes, one immediately got the sense that this is where he belongs, in front of a crowd, bearing his soul through his music. And the crowd felt it, too. The up tempo drive of the song had the crowd shaking their collective ass in time with the music and those who were familiar with the tune were in full vocal harmony. Maybe most importantly, to look at the band, to look at the faces of those in attendance, there was joy. Everybody was smiling and having a good time . . . and in these tough times, isn’t that all we can ask for? Music to take our minds away from the crap that surrounds our everyday lives? Petty Crux just may be the cure to our nation’s depression!
The band followed the opener with the jazzier toned “Heroes Are Lonely.” The spotlight immediately was pointed on the other new guy, Taylor, who hammered away at the keyboards with a spirit of Stevie Wonder in his hip pocket. Throughout the night, drummer Paul attacked his kit as if in retaliation towards some deed done wrong, but for this song, he kicked down the funky beats while Taylor’s keyboards grabbed everyone’s attention, and the collective ass continued to shake. These guys simply did not let up on the groove factor, and in combination with the humidity of the room, the masses became a single bumpin’ and grindin’ entity shining under a layer of sweat. Every bit of emotion and fire that the band put out there, the crowd gave back with fair market value. 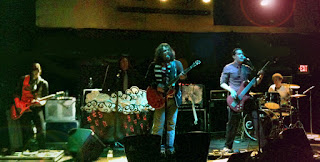 Throughout the performance, guitarist Jason appeared to be auditioning for a part in one of the Cirque de Sole shows as he balanced precariously upon his effects board. Swaying back and forth on one foot, squeezing out every last decibel of sound he could from the vast array of pedals laid out before him, Jason seemingly picked out notes from the air, processed them in his own special way, and released them back to gyrating crowd. Before I knew it, Petty Crux were powering through what could possibly be the bands catchiest tune of them all in “Apocalypse . . . For Now.” This is the song that first grabbed my attention with these guys when I heard the album and even on this night, it’s the song that had me humming throughout the night, into the next morning . . . over breakfast, down the freeway to my next engagement. I think y’all get the idea. Racer said it first and everybody seems to concur with the term. Ear worm.
Finally, the night ended with a rousing rendition of the album closer, “Hello.” Fan-fucking-tastic! I was warned prior to the gig that there was something special in store with this particular song, but to experience it was something completely unexpected and uplifting. Singer Clemente had the crowd contributing its boisterous and somewhat off key pipes for a rousing sing-along that built and built and built with tons of emotion. As the last notes of the music died out, I got the sense that I got the opportunity to witness something pretty special here. Phenomenally catchy music played with a bit rock n’ roll muscle performed for a crowd who I expect will follow this band with a fiery passion. In so many ways, it’s hard to believe that this was the bands first show with this line up and after a fairly lengthy hiatus. Did I witness history? I think it’s a tad early to really say, but this is for certain, there was something so damn compelling about this Petty Crux performance that I wouldn’t be surprised if this band snowballs and we begin to see these guys on billboards across the globe. Y’all need to go to the bands web page(s) and keep tabs as to when they’re playing again coz’ you’re not gonna’ want to miss them. And when you do catch ‘em, look me up coz’ I’ll be there somewhere . . . ass a-shakin’! - Pope JTE

Petty Crux said…
Thank you John for coming down and sharing a great night with us. many more shows and bigger things yet to come.
-Clemente
October 30, 2009 at 2:14 PM

Anonymous said…
no amount of words can do justice to the sound of petty crux! they're something experience live to truly appreciate.
October 30, 2009 at 2:37 PM