Always being a fan of punk, particularly classic U.K. punk, we got pretty frothy at the mouth when we received a smoldering package of classic Subhumans re-issues for our overworked postman Sal. Digging in, we were greeted to six beautifully designed, lovingly created homages to a lost punk legend. Barely giving time for the drool to dry on the corners of our mouths, we got the discs into the quivering hands of our reviewers. Our esteemed punk-meister Woody responded first with his thoughts on three of the discs. Here's Woody . . .

You smell it before you see it. You’re walking down a main street in any city and notice a bunch of young, crusty punks sitting on the sidewalk. The wind blows their b.o. right into your grill. As you approach you can’t help but notice the unwashed black denim jacket. Take a look at the back and there it is – The Subhumans logo on the back. Sometimes it’s a patch held on with safety pins, other times it’s a filthy old t-shirt sewn on the back but it’s always there. Loud, proud and smelly. 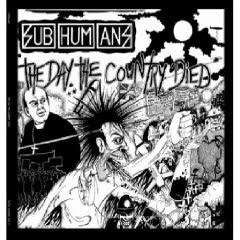 The Subhumans are one of the most uncompromising punk bands to ever emerge from the UK. They’re often confused the Canadian punk band of the same name who did the classic “Slave To My Dick.” Their history is very interesting but that will have to wait for another time. The UK Subhumans started in 1980 as a fiercely independent punk collective. Their records makes the first Clash album sound like Pink Floyd but are not as weird as Crass. Southern Records has reissued 6 CDs full of their vintage filth. Here's three of em.

The Day the Country Died was their debut full length was recorded in 1982. 16 politically charged screeds are discharged in 36 minutes. The guitar sound is scratchy and abrasive while the rhythm section pounds out a furious polka beat. The vocals of Dick are similar to Eric Idle from Monty Python in full flight. Political songs like “Minority” and “New Age” are filled with venom and rage for every punk’s target Margaret Thatcher. Since it was the early 1980’s, there are plenty of songs about the fear of nuclear war like “All Gone Dead” and “Dying World.” Religion gets roasted on “No” and the cops get the finger on “Til The Pigs Come Round.” 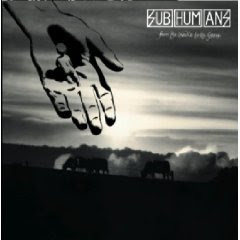 Their second album From The Cradle To The Grave sees some improvement in production and musicianship. The songs are still fast n bulbous but the guitar sound is a little thicker and the songwriting is more adventurous. “Forget” is a fierce re-write of Wire’s classic “12XU.” “Waste of Breath” features cowbell (!) and takes on the posers of the punk scene. “Wake Up Screaming” is a 5 minute dirge with a bit of a Killing Joke feel to it and the title track is a 16 minute epic about the grim realities of life from birth to death. Don’t listen to this if you’re in a good mood. 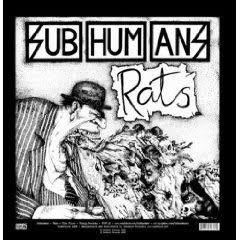 The third in the reissue series combines two EP’s on 1 CD. Time Flies But Aeroplanes Crash is from 1983 and Rats from the following year. Time Flies is an 8 song EP that expands on the scratchy Slits style agit punk of the debut album. “Get Out Of My Way” is an irresistible 1 minute pissed off declaration of intent. Most surprisingly is the piano ballad “Susan.” Who knew anarchy could be played on the piano. If that’s not what you want to hear there’s plenty of other short ragers like “I Don’t Wanna Die” and “Everyday Life.” The 4 song Rats EP has 3 fast ones condemning society. The fourth song “When The Bomb Drops” is a reggae song about how it will be a holiday in the aftermath.

Despite all the political rants, The Subhumans always inject some humor in their songs. Just when you think you can’t take anymore browbeating they’ll throw in something about not wasting your money on David Bowie LP’s. All 3 of the CD’s come in fancy digipacks with booklets and big posters. Get all 3, steal some cheap beer and start a riot of your own.

The Day the Country Died

From the Cradle to the Grave

The Subhumans are one of my favorite bands. They're stuff is highly political, but unlike so many of their ilk (Crass and Conflict are prime examples), they humanize the revolution. Their last three albums, From the Cradle to the Grave, Worlds Apart and the posthumous 29:29 Split Vision are great examples of how punk didn't have to sacrifice its spirit or intensity to broaden its horizons and hone its technical skill. The song "Worlds Apart," oddly enough on 29:29 Split Vision and not the album of the same title, has perhaps my favorite political lyrics of all time. Great, great stuff. Dick and (I believe) Trotsky went on to play in Culture Shock who released some great ska-infused politico-punk as well, most notably Go Wild and Onwards and Upwards. All great stuff.

One nice thing about the re-issues is that they span the whole career and you can really see them become more articulate both musically and lyrically.

I saw the Subhumans play on election night in 2004 and it was so fitting to be there seeing them on a night like that. Of course, that election was bad versus bad, but at least I was among some people who think differently and believe and hope the world can change. God bless them, they're a fantastic band.