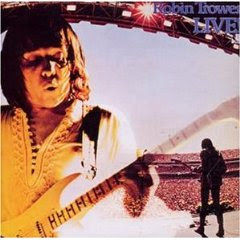 Music in the live element has, literally, taken center stage at the Ripple this week and it’s one of those weird occurrences in that it really wasn’t planned to happen this way. It just so happened that all of the Ripple contributors were listening to live releases or attending concerts that struck a chord within us and made the whole thing come together. Ah yes . . . the magic kismet nature of things that seem to happen around this place on a regular basis. To wrap up this “featured” week, I want to share with y’all an album that came out of nowhere, but has apparently been lingering in the musical periphery since the mid 70’s. Robin Trower, yes . . . Bridge of Sighs . . . released a live platter in 1976 simply entitled Robin Trower Live! The three piece unit was captured in all of their elegantly hard rockin’ blues-y brilliance while at the Stockholm Concert Hall in the middle of winter. Nothing melts the icicles from the frosty eaves like the twin humbucking wail of a Fender Strat or warms the heart like a smooth run of soulful notes tastefully strung together. I had never heard Trower prior to this recording, so I can’t say if this is the best Robin Trower recording out there, but I can say that this disc, based solely on how it touched my emotions, has very quickly become the album that I most frequently reach for. 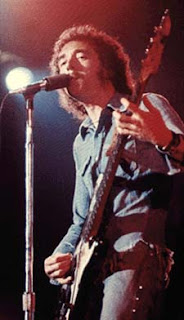 With the rhythm section of Bill Lordan (Drums) and James Dewar (Bass / Vocals,) Robin Trower powers through a set of richly textured and soulful jams, none of which I recognized. I truly experienced this album with virgin ears and opened myself for something new. I took the plunge, and my God! It was as refreshing as a chilled glass of cucumber water on a hot summer day! As the band tears into “Too Rolling Stoned” I was drawn to that classic sound of rock that I grew up with. Heavy low end and a scratchy guitar riff push the introduction of the song and then suddenly Dewar’s warm toned voice takes over. All ears focus on that voice as it fits the vibe of the music perfectly and compliments Trower’s distinctive six string voice. Blues-y in its groove and swagger, the song bursts from the speakers like a wild animal that’s been caged for more than twenty minutes. The breakdown at the midpoint of the tune is epic and was my second musical epiphany to this album. Trower’s solo is one for the ages and filled with layer upon layer of nuance and class. It was at this moment that I vocalized to no one in particular, “Why the hell haven’t I ever heard this before?” Just stop and listen to the whole solo. Trower seemingly is having a conversation with his guitar. He speaks, it responds. What an absolutely magical performance! 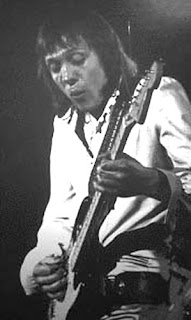 By the time the second track, “Daydream,” kicks in, you’ll be fighting the urge to hit replay on your player of choice. “Daydream” drops the tempo way down and we’re hand delivered a steamy barroom blues ballad, packed with so much damn soul that James Brown would hang his head in shame for carrying around his title of Godfather. There’s a Hendrix-type flavor to this jam, but more from an influential place rather than a place of blatant knock off. Trower plays the blues with his own voice and it’s refreshing one at that. Listen for the little flourishes of scales that he effortlessly throws into the groove, and then the passionate solo towards the end of the tune. Man . . . that squeal with that feedback is like a forearm shiver to the sternum. So much force to that flurry of notes, I tell ya’ . . . my head was spinning after that initial spin and leaves me breathless listening to it again today. I had always been under the impression that Trower was a more prog-rockin’ kinda’ player, so I was a little surprised when I heard this material so rooted to the southern U.S. sound. And what a pleasant surprise it was! 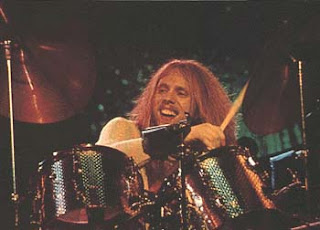 Side two opens with “Lady Love,” another heavy groovin’ blues based rocker and highlighted by Dewar’s heavy, yet melodic vocal work. Listening to his voice just takes me to that safe place of memories past. Just gruff enough to know the dude means business, but the melody cuts through the outward aggression and creates a sense of security. “I Can’t Wait Much Longer” drops the tempo back down and features a more psychedelic flavor, Trower’s guitar howls with an effect that sounds like he’s playing underwater. The waves of sound shimmer through the air and across the senses, all the while Dewar is belting out the vocals from a deeper place of pain. By the time we get to the guitar solo, we’ve consumed a half bottle of whiskey, filled an ashtray with a pack and a half of cigarette butts, and lost ourselves in thought over who she used to be and what could have been. A ton of emotions bubble out of this tune so be prepared for a wave or two of depression to hit you. “Alethea” captures the talents of all three members of this unit in all of 4:13! Guitar solos . . . drum solos . . . bourbon flavored vocals . . . and all packed into a jam that highlights the psychedelic aspects as much as it does straight up blues. Trower’s solo is as fierce as it is soulful and Lordan’s drum solo is has as much class as it does balls out aggression. This was epiphany number three from this album. Pay close attention to the crowd as you hear their cheers of approval . . . I shoulda’ been there. Of course, I was only three years old in ’75, but I think you get the point!
Seriously . . . where has this album been all my life? Why hasn’t the world talked more highly about the talents of Robin Trower? As far as live albums go, Robin Trower Live! is as good as any I’ve heard. Would I rank it up there with Iron Maiden’s Live After Death? Eh, different style of music and with Maiden, you’re looking for more than the music . . . you’re looking for the show. With Trower, it’s all about the music and it comes across as the most important thing you’re ever going to feel. It’s straight forward rock with no frills, but just enough showmanship that highlights the individual band members’ talents without taking any of the focus away from the music. Soulful, rocking, classy, and loaded with emotional performances, Robin Trower Live! is a seven song collection of blues based tunes that excite me to the point of tracking down everything that Trower has ever done. I’ve heard the name throughout my life in music, but no one ever took the time to sit me down, put a needle on a song or two and say, “Dude. This is Robin Trower.” Friends, go out there and get this one . . . and, take a chance on that one album that you’ve always been interested in hearing, but were too skeptical to pick up because you’re unsure if it’s gonna’ satisfy your musical needs. You’ll never know if you don’t try it. Damn . . . now I sound like my mom. - Pope JTE

Great album that I just picked up about a year ago.

Robin Trower is playing tonight in NYC but I already have tickets for ZZ Top. Why couldn't they make it a double bill?

I have this album! It's great!

Excellent job. I enjoyed it very much. As a child of the seventies Robin has had a large influence on my guitar playing. I've never met him, but have seen him several times and would love the opportunity to sit with him for just a couple moments.
Oh, I would correct you on one thing however. Strats use single coil pickups, 3 of them, not humbuckers.
But I get your point and it's well taken!