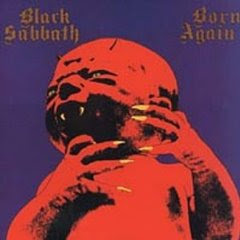 A lot of people only like the Ozzy era while some prefer Dio. Then there are the freaks who love this album. I am a combination of all three. It’s probably because I love Tony Iommi’s guitar playing so much, but I really do enjoy just about everything by Sabbath from 1970 to 1983. Volume 4 might be my all time favorite, Technical Ecstasy is my least favorite and I think Never Say Die is extremely underrated. Born Again is not a classic album, or even a great one, but it does have some truly great moments. It also has some pretty lame ones, too.

Most rock fans know the story of Ronnie James Dio quitting Black Sabbath in a huff over supposed funny business regarding the mixing sessions for Live Evil. Ronnie says Tony and Geezer were always late, Tony says Ronnie was undoing the mix he was working on. Now that they’re all pals again and touring as Heaven and Hell we’ll never really know for sure. I have a feeling there may have been some alcohol and cocaine being used while all this was going on so everyone’s memories could be a little fuzzy.

Anyways, it’s 1982 and Tony needs a singer so he gets Ian Gillan from Deep Purple drunk and convinces him to join. Some people freaked out calling them Deep Sabbath or Black Purple and Ozzy had a field day making fun of his old friends. They get Bill Ward out of detox and back behind the kit so it’s ¾ of the original Sabbath line up. None of this really mattered to me when I hear that Born Again was coming out in the late summer of 1983. I was a huge Deep Purple fan and was stoked to hear his voice with Sabbath’s music. 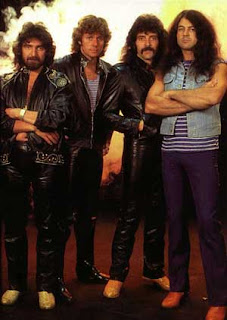 I don’t think I bought it the day that it came out, but pretty soon after. At the time I loved the cover because it looked kinda evil. It was only slightly better than some of the stuff I was picking on Metal Blade and Neat Records. It’s actually a pretty crappy cover, but still kind of awesome in a way. The photos of the band on the back cover might actually be scarier. I remember thinking that they were all 1000 years old but it’s totally metal to be an elder with a big droopy mustache.

As far as the music goes, let’s get the bad stuff out of the way first. I’ve never been a big fan of the title track. It’s a pretty long and traditional sounding ballad. It would be fine on an Ian Gillan solo album but not for Black Sabbath. “Keep It Warm” is another slow one and might be the only true dud on the album. “Hot Line” is an OK rock song but never really goes anywhere. Same could be said for “Digital Bitch” but at least it’s uptempo and has bitch in the title. I used to love referring to rich girls at high school as “Digital Bitch” without even knowing what it meant. Probably had something to do with their digital watches while I was wearing a hand me down wind up. “Stonehenge” and “The Dark” are just filler tunes like “FX” from Volume 4 and “E5150” off Mob Rules. Cool intro music before the live show but kinda dull, even on headphones.

Now the good stuff. The album opens with the “Paranoid”/”Speed King” hybrid of “Trashed.” Ian Gillan was always more of a drinker than a druggy so it makes sense that the lyrics are about driving fast and tequila. Tony’s riffing is lean and mean, Bill and Geezer thud away like mad and Gillan screams his ass off. The trademark evil Gillan shriek starts off the heavy “Disturbing the Priest.” This song was written as a result of the clergy from a local church complaining about all the noise Black Sabbath was making at night. 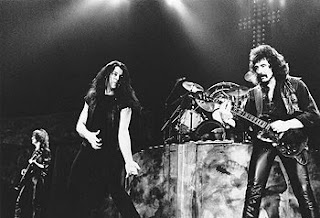 Probably the best song on the album is the truly awesome “Zero The Hero.” This is one of Tony’s best riffs. It’s a simple, circular pattern but just has such an evil quality to it that instantly makes you want to bang your head. Slash pinched the riff for part of “Paradise City” but who doesn’t steal from Tony? This would be a great song for Heaven And Hell to do live but Dio would never go for it.

Everyone involved with the record has complained about the crappy mix due to some kind of dolby noise reduction to make it sound better on the radio. The mix is indeed murky and Tony has often said he’d love to remix it. There is an illegal download floating around of an unmixed version of the album that does sound much better. Some of the songs have slightly different lyrics and guitar parts so it’s obviously a tape of when the album was still in progress. There’s an unreleased song called “The Fallen” that has some great drumming from Bill Ward and kind of a Zeppelin feel (the main riff has a little “Celebration Day” in it). The real treat of tracking down Born Again Unmixed is the 9 minute version of “Zero The Hero.” Tony really lets rip on this.

If you find the Born Again story intriguing than check out all the gory details on it at Joe Siegler’s excellent Black Sabbath website www.black-sabbath.com/ and go to the discography page. There’s also a website dedicated exclusively to Born Again at http://home.swipnet.se/sabbath83/. You can read all the hilarious tales about Ian Gillan forgetting the lyrics to old Sabbath songs, the Stonehenge stage set that inspired Spinal Tap, and more.

I liked this album when I first bought it, but it was more out of ignorance. It didn't take long to differentiate this from their better known material. What I could never figure out though, was why this didn't work. I mean, 3/4 of the original line-up with Ian Gillan? How could that not be great? The thing is, the album might be more listenable than I give it credit for, but what a disappointment considering the potential.

Saw them at the Reading Festival that year (83) They were great Stonehenge and all! Came on to Children of the grave. Awesome

I admit, I wasn't too impressed with this album. I dunno, something about it rubbed me the wrong way... After reading this review, I'll give it another shot.

It's a big turd bomb. Surprising that it stunk, but stink it did. Although there was worse to come from albums flying under the banner of Black Sabbath.

Well I'm in the first camp. Love the Ozzy stuff (though after Vol. 4 it gets spotty). Hated Dio, always did, always will. Only good thing he did sort of was Rainbow and his cameo in the Pick of Destiny. Gillian was the man ... in Purple. I sound whiny. I am. Sorry. This album is a big glass of meh. I'm seeing Them Crooked Vultures soon. I will return with more happiness.

Never heard the album but an interesting story nevertheless!

Anyone who doesn't like this abum is a chump. It SHREDS!

Love this album, and I have a bootleg copy of the live show they did at the Worcester Centrum which sounds better now than it did back then. It is most definitely the oddest Black Sabbath album ever, but is one of my favorites because it is so odd.

Zero the Hero is one of my favorite Sabb songs.