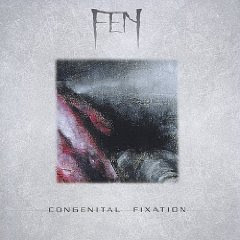 Nobody loves a musical freak out more than me. When a band comes along and throws some off time, bone rattlin’ into a mix of razor sharp guitars, thick low end grooves and manically majestic vocals, well . . . odds are, you’re gonna’ get my attention. Make the whole thing sound crisp with an experienced knob twirler or a sound engineer who calibrates his own microphones for giggles, oh boy . . . my pulse is increasing. Take all of the elements of experimentation and confine those same elements into a concise capsule of time to eliminate senseless noodling, exceeding five minutes only on the rare occasion . . . uh oh, the sweat is starting to bead up on my forehead. Make the songs dark little epics that let the imagination go wild and inspire one to pick up an instrument for their own artistic creation . . . if you haven’t called the paramedics by now, I really wish you would. I’m gonna’ be in need of medical attention in about five minutes. Thank you.

Released in 2006, Congenital Fixation finally found its way to a place of some reverence. Yes . . . my CD player! I had never heard of these guys prior to getting this in the mail and that, my friends, is a damn shame. Well, better late than never, right? Fen are a powerhouse of a rock unit. They have a progressive metal sound, but not that over-the-head, we’re-smarter-than-you kind of sound. Think along the lines of Tool, but with less of that deep and mesmerizing drone. Think Faith No More sans keyboards and rapped vocal passages. Yeah, they’re weird, but not for the sake of being weird. After listening to this disc, I get the distinct feeling that a conversation with these guys would lead to otherworldly discussions that would have us coming closer to solving the universal meanings of life. That or boisterous laughter at the expense of the unfortunate. These guys use fantastic tones on the instruments, oddball time signatures, and song structures that swirl around the brain like fresh crème added to a hot cup of black coffee. Melodic, yet heavy; elegant while flexing their muscles, Fen have cemented their place in my collection of avant garde rock. 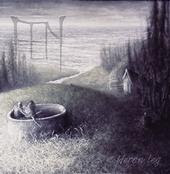 “Cockroach Eyelids” and “Hermit Hole” launch Congenital Fixation from plastic disc to aural fascination in the span of .05 seconds. The crisp and punchy bass production stands out, delivering elbow shivers to the sternum, sucking the breath from the lungs as the groove pounds along. The guitars have a nice crunch to them, never too distorted to muddy up the sound, but not overly produced to sound poseur-ish. The song breaks around the 2:00 mark, the drums have that beautiful sound, almost from the perspective like you’re the engineer adjusting the mic positions while the drummer is cracking away at the skins. And, the vocals are all over the fucking place! Gritty and sinister through the first line, vibrant and full of wild inflection for the second, and soaring like he was sucking on a tank of helium at the chorus. I love this dude’s range! Keep in mind, “Cockroach Eyelids” is only about three and a half minutes long and these guys neatly tuck more time and mood swings into it than one might see in a Mozart concerto.
The moment I heard “Hermit Hole” I knew that this album was a keeper. With that polyrhythmic intro, whacked out vocal embellishments, the muted guitars . . . how could this song fail? But the moment that the tune permanently stuck was when the band drops from the groove and we’re left hearing this clean toned, palm muted guitar riff filled with more style and class than could ever be expected. So unique in its deliverance, that one guitar riff was the moment that I knew that Fen weren’t content with playing music by anybody’s rules. Psychotic and oddly evil, the vocals do a stellar job of creeping out the listener, but it comes back to the guitars on this track. At one point, the six string shenanigans make you feel like you’re walking through a darkened corridor, cob webs fluttering in a draft, tickling the back of your neck, sending shivers up and down your spine. Bad ass techniques! Though, the guitars are the highlight of the track, without the solid rhythm section moving the song down that darkened corridor, the guitars would be meaningless . . . just so much stretched out cotton clinging to the rafters. Fen work together as a symbiotic being, breathing life into the dead husks of songs and giving life to their art. 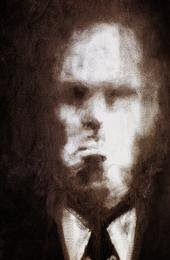 Fast forward to “Rubicon Eyes” and check out how they mix in a little, what is that? Mandolin? Whatever it is . . . it adds this wonderful texture of Mediterranean flavor to a completely bizarre song. The vocals are filled with nuance and incredible layers of texture. Hell of a ballsy riff mid way through the song that breaks into a quieter passage highlighted by those creepy ass vocals. They almost sound like a child locked up in a closet content with abusive imprisonment and happily singing a lullaby. Absolutely chilling in execution! Then Fen change pace (by now you should know they’re not content in repeating themselves) and drop the acoustic guitar driven “Pin Cushion.” Haunting in its beauty, “Pin Cushion” is a multi-layered vocal performance over arpeggios delicately plinked from the acoustic guitar, and once again, shows the depth of this bands writing talents. Finally, “The Orchard” puts the wraps to this disc. This tune comes across as the most accessible song, but only in that the heavily strummed chords of the acoustic guitar creates the warmest, most luxuriant track on the disc. Filled with huge melodic movements, “The Orchard” simply demands that you give yourself to the music even though the subject matter still has some overwhelmingly dark tones. Pay close attention to all of the instruments on this one. The guitar solo is so damn tasteful and distinctive; the bass is warm and full of soul, the vocals elegant and rich, and the drums crack with understated power . . . it’s an epic, folks, and well worth the price of admission.
Congenital Fixation requires multiple listens. That’s not because it needs to grow on the listener, huh . . . far from it! It’s just that there is so much going on in the way of textures and subtle instrumental flourishes that to really hear the splendor of this recording, you need to listen to it over and over again. Hell . . . you don’t need to, you’ll simply want to! It’s addicting because of these nuances, but also because there’s simplicity to it as well. For the most part, every track is a keeper, not one song sounding like the one before it. Fen wear their influences on their sleeves, but at no time do they sound like they’re openly aping the works of those before them. The album is a unique voice applied to a musical style that is in sore need of a unique voice. Again, it’s weird, but nor so weird that it loses the listener. What’s weird about it is that it’s so damn good and no one is talking about it. - Pope JTE