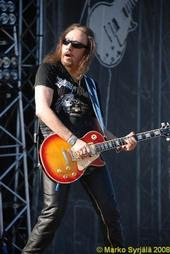 Here's some news that should get all waveriders salivating.

For the first time in nearly 20 years, legendary guitarist Ace Frehley has emerged to add a new exclamation point to his celebrated solo career. Scheduled for liftoff on September 15, the original KISS guitarist’s fifth solo album, Anomaly, will be released on his own Bronx Born Records. To commemorate the event, Gibson has created their second Ace Frehley signature Les Paul guitar—the first (in 1997) was the best-selling signature model of all time.

One of the most beloved personalities in rock ‘n’ roll, Frehley’s the man behind not only KISS’ iconic logo, but the all-time stadium anthem “New York Groove.”

From the thunderous guitar riffs of the first single “Outer Space” to his supercharged cover of Sweet’s 1975 classic “Fox on the Run,” Anomaly includes several nods to his distinguished career. The pickup acrobatics of “Fractured Quantum” and wah-wah scourge of “Genghis Khan” (featuring backup vocals from Meat Loaf’s daughter Pearl Aday) are signature Ace.

It should go without saying, but “this album has some heavy, heavy songs,” Frehley promises.

This commercial is almost as good as the Dunkin Donuts one he was in.

Ace is one of my biggest guitar hero influences. Great to see that he's still out there and sounding good.

Much better than anything Gene or Paul have released.