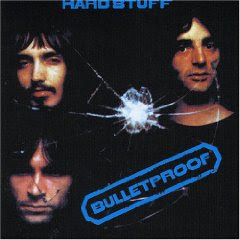 The first half of the 1970’s is a bottomless pit of kick ass hard rock. Every month or so someone will turn me on to some band I’ve never heard of and it’s always from before 1975. Not too long ago Racer wrote up a band called Toad. Never heard of them but checked it out and loved it. Bulletproof by Hard Stuff is my latest obsession.

Last year I gave my friend Vinny a copy of Death Walks Behind You by Atomic Rooster. He loves Deep Purple and Emerson, Lake & Palmer but had never heard this gem. He freaked! It caused him to track down a bunch of their other records. On the search he stumbled across Hard Stuff, featuring guitarist John Cann and drummer Paul Hammond both from Atomic Rooster’s peak era. The bassist is John Gustafson from a band called Quatermass, who had a song called “Black Sheep of the Family” that was covered on the first Rainbow album. It’s probably not a coincidence since Hard Stuff was on Purple Records, the label started by Deep Purple’s managers once they got rich. Originally the band was called Bullet but had to change the name due to litigation from another band with the same name.

Released in 1971, Bulletproof is less progressive than Atomic Rooster and more bluesy in a Groundhogs sort of way. The sound is pure British power trio with a great rhythm section and tasty guitar licks n chops. If you’ve ever wondered what Deep Purple In Rock might have sounded like without Jon Lord, then give this a shot. 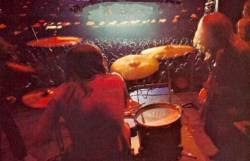 “Jay Time” is a funky blues shuffle with tripped out vocals that sound like they’re being put through a rotating Leslie speaker cabinet. It’s possible that this is the first 420 rock anthem ever recorded because of the line “it’s jay time everyday.” Back in 1971, it was jay time every 15 minutes because of the lousy dirt weed going around.


“Sinister Minister” sounds like something off the first Lucifer’s Friend album, another fairly recent discovery for me. John Cann’s guitar really smokes on this. It’s classic Strat into a Marshall (or maybe a Hi-Watt) turned all the way up. “Taken Alive” ventures almost into Creedence territory with a riff similar to “Fortunate Son.” Strangely enough the bass and drums sound kind of like Saxon on “Wheels of Steel” or “Dallas 1PM.” Someone needs to find out how many times Biff saw these guys live. Cowbell makes its first and only appearance on the album for “Time Gambler.” The guitar sound is very raunchy and fans of Fuzzy Duck and Dust will love this one.

Side two on the original album fires up with “Millionaire,” a distant cousin of Thin Lizzy’s “The Rocker.” It’s about driving fast and I would encourage you to do the same when blasting this on your way to the liquor store. “Monster In Paradise” sounds like Budgie covering Deep Purple. Probably has something to do with it being co-written with Ian Gillan and Roger Glover. “Hobo” is the closest Hard Stuff ever gets to sounding like vintage Rooster, with a similar feel to “Devil’s Answer.”

“Mr. Longevity (RIP)” is another song that reminds me of Lucifer’s Friend with soaring vocals and a Zeptastic guitar solo. The album wraps up with a short and funky studio jam called “The Provider (Part 1)” that’s the missing link between the James Gang and the Groundhogs.

I have this album in a playlist on my ipod with other forgotten heroes like Sir Lord Baltimore, Leaf Hound and most of the bands mentioned above. They don’t make albums like this anymore, but thankfully they made a lot of them back in the old daze.

Dave from Australia here... I dunno what album it's off but what about Hard Stuff's "Suicide" yeah yeah... As well as SLB's Kingdom Come Suicide surely has to be the start of the true double bass heavy metal sound that SLB laid the foundation for?