Grand Atlantic - How We Survive 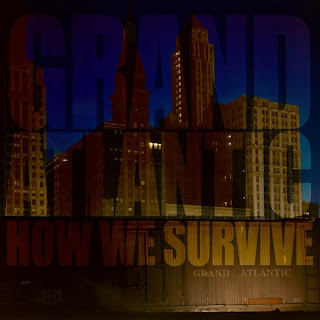 It doesn't take more than a second. An instant. One note, one beat, or in this instant one mutated guitar tone exploding into a spectacle of crashing chords and resounding bass. That's all it took for me to know.

Grand Atlantic have produced one of my favorite albums of year.

Coming from Brisbane, Grand Atlantic molds the psychedelic post-punk ethereal moods of their countrymen, The Church, with the shoegazing swirling madbeat of The Stone Roses, and toss in a touch of garage crunch a la Ripple favorites The Thieves just for kicks.

The results of this combination of psychedelic distillery are intoxicating. The sound of Grand Atlantic is as grand as their name suggests and as open and vast as their namesake ocean. Many bands have tried to navigate these same post-Oasis waters, with variable degrees of safe passage. But Grand Atlantic captain their ship with absolute fluency.

When I say this is an addictive album, I mean it makes crack cocaine seem like salt water taffy. This is absolutely hypnotic, mind-numbingly good sixties-flavored alt pop of the sort the entire world needs to pay attention to.

Like I said, it only took a moment for me to know I was in more than capable hands. "Coast is Clear," is a stellar opening track, floating in waves of sound, riding a Church-esque psychedelic vibe. The boys play effortlessly with mood and tone, the production perfectly underscoring their reaching grasp. Moments of brilliance shine like the light of a nearby supernova, then gently disperse into a nebulous cosmic cloud, only to be reborn again in another galactic swirl of chiming guitars, harmony vocals, and undulating bass tones. This is a huge sounding song, seeming to take up volumes of space, yet it's never overwhelming. Guitars layer in multi-tracked beauty, synths add tone and texture. Phil Usher's vocals are instantly grabbing, understated and remote, they lay a cool edge to the proceedings but still hint at a burning passion underneath. Much like Ian Brown at his best, the vocals gently pull you in while hiding their true menace. The back beat is hypnotic as synths follow the song to the end like the trailing dust of a passing comet. 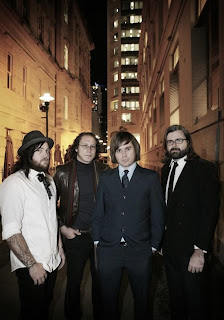 Then instantly, the rock comes down. "Tripwires," uses unusual synthesized sounds and powerful garage guitar riffs like the best of the Heavy Young Heathens. Power wrestles with the beat, drums crashing in perfect time, as the mutated guitar whines through the melody. Big crunching riffs add the muscle that keeps this song rushing to the end. Usher digs down deeper in his vocals here, roughing up the smoothness that graced "Coast is Clear," adding a touch of spit and snot, and the song rocks because of it. His sneer adding a nitro burst of soul, the result is a picture-perfect moment, a garage psychedelic pop rock masterpiece.

Oh, if only Oasis could write em like this, they'd still be relevant today.

And we're only getting started here. "She's a Dreamer," is the song garnering the most radio attention around Australia, and rightfully so. Add some big chiming guitars, hypnotic psychedelic flourishes, a can't miss rhythm section with absolutely dreamy melodies, and a stunningly gorgeous chorus and what you get is another moment of pop perfection. We hear lots of music here at the Ripple and rave about a lot of it, but even so, we realize that certain bands and certain styles of music will never have universal appeal. They will always be cult or buried in the underground. Grand Atlantic isn't one of those. This is big, big pop music, the likes of which should be pouring out of stereo systems and radio station antennas the world over. I can guarantee you, it will be pouring out of the Ripple Radio Show speakers often. We will make it our mission to break these guys in America!

Those first three songs were enough to make me completely hooked on the band. The strength of the songwriting and the confidence in the performance absolutely won me over. Combine that with the bigger-than-the-Milky-Way production, and the exquisite way the whole shebang was put together, and I already knew this album was headed straight for my year's end list. But, fortunately for me, the album doesn't stop there. "Freeway," continues on in the same vein, gentle and gorgeous, guitars ringing out like church bells resounding against a bright sunny sky. 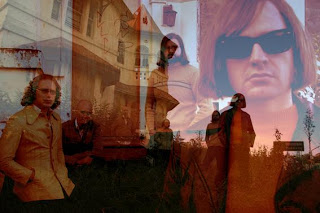 For the title track "How We Survive," the boys open up a big bottle of Beetles juice and pour it straight over their already tasty brew. Shades of Sgt Pepper roll across the trombone fills, drum rolls, rich harmony vocals, delicate-yet-sweet-as-molasses melody, and full orchestrated production. This song is a mini-epic in itself, a tribute to Beatles-inspired melody and layered studio wizardry. It's actually frightening how beautifully this song is put together.

Then, lest you think the boys are starting to lose it in the world of knobs and buttons, "Used to Be the Sensitive Type," brings it all back earth-bound riding across the back of some nicely strummed Rickenbackers and harmony "sha la la's." Another dose of cotton candy melodies fills this song out with a chorus that will leave residue in your cerebellum for days. "Just Another Ghost Town," picks up the pace and the garage crunch without ever straying away from the beautiful creation already in place.

And it goes on from there. Through one brand of impeccable psych-infused power pop after another. Whether roughing it up with the garage fuzz of "Holding Pattern," or layering on the Beatles-flavored sensitivity with "Don't Say Goodnight,' the entire album has an effortlessly easy, feel-goodedness about it.

Soon the whole world will tune into these cats and their name will be bandied about as effortlessly as the bands I mentioned like Oasis and The Stone Roses. But before that happens, Grand Atlantic need to break into the world's consciousness, one set of happy ears at a time. Do yourself a favor, buy this album now. Make your ears happy, sit back in your chair with a Chesire cat grin, and smile at your brilliance at discovering these cats "way back when." Because soon the rest of the world will catch on, and you don't want to be left behind.

It's nice that these guys are getting attention outside of Australia. They're pretty good.

What an amzing album - thank you for bringing it to my attention! I had thought that this kind of widescreen big-picture pop was almost extinct - but Grand Atlantic have the potential to revive the genre for a larger audience. Awesome work...great band, great album. Let's hope they make it to the US soon.

One of my favorite bands, and a great review. The first album by Grand Atlantic is excellent too.

Hey guys, Morgan from Grand Atlantic here, cheers for the kind words! We're actually playing SXSW and Canadian Music Week in March and we'll be playing shows in San Fran, Monterey, LA, Chicago, Brooklyn, Manhattan and back to LA again. Hopefully we'll be playing a show near you, check out our website or myspace for the dates :)